2011 was be the first year the H13 was used at Burning Man, and none were reported to blow down. However, the winds during 2011 were very mild, so we can't say it's been totally "playa tested". It's been suggested that you over-engineer for wind and strength. Consider building it first at home to test and refine, and maybe ask for help and comments at http://groups.google.com/group/hexayurt 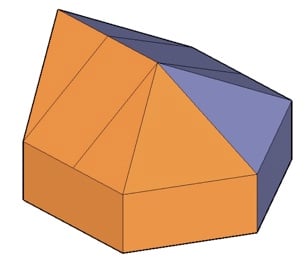 Video makes the H13 design much easier to understand:

The H13 is a brilliant improvement on a longstanding hexayurt problem. Compared to the common 8' hexayurt, one more panel gets you increased standing room and a face on which to put a full-height door.
To learn about hexayurt development for disaster relief and other applications, see [www.hexayurt.com the hexayurt project.] If you want to make your own hexayurt, first see the how-to page, written particularly for Burning Man participants. Here you will find a description of the various shapes and sizes of hexayurts so you can pick the best one for you.


There's some debate about the practicality of the "taller" hexayurts (H13 versus the 10'), mostly because they're new designs that haven't been tested multiple times in playa conditions. The 10' might have more stability than expected because it is symmetrical, doesn't have the protruding, high face of the H13, it has an intact tape ring, and is more reliable to tie down, (especially with a rope halo, because the loads on the rope halo or tape anchors will be equal. Asymmetrical structures, like H13, are just unpredictable. The H13 also lures one into building a human-sized door on the high 8' wall, however a door that size will cut into the tape tension ring that also creates major stability in the hexayurt. In general, the 10' is a conceptually simpler design to build. Structural engineers have been known to side with the 10' hexayurt over the H13 for structural reasons. At the end of the day, the common 8' hexayurt is still amazing because of its symmetry, low air drag (due to low height) and simple assembly. 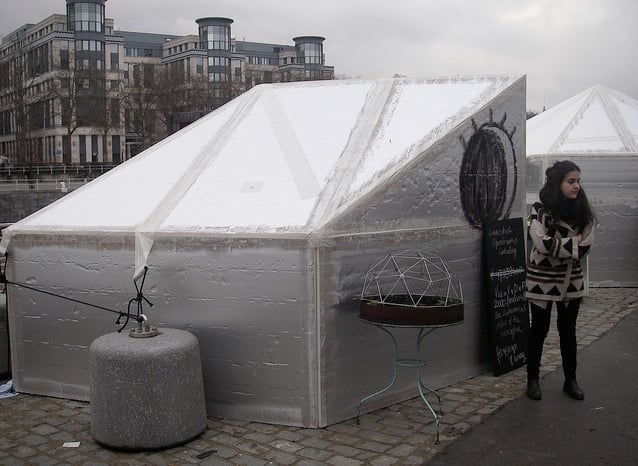 Scott Davis and Dylan Toymaker invented the H13, which solves one of the oldest quirks of the hexayurt design – how do you get a full-height doorway? Scott took a creative leap, switched around a couple of triangles, and came up with a design which for just one additional sheet of plywood gets you a structure with a full 8′ entry-way, much more interior walkable space (see below), and (subjectively) a much better over-all aesthetic. Read Dylan's October 2010 blog post for details. Vinay regards it "a fantastic piece of work", and "suspect(s) it will become a very common hexayurt in years to come". 3D sketch of Dylan's H13 of October 2010.

How to build it[edit | edit source] 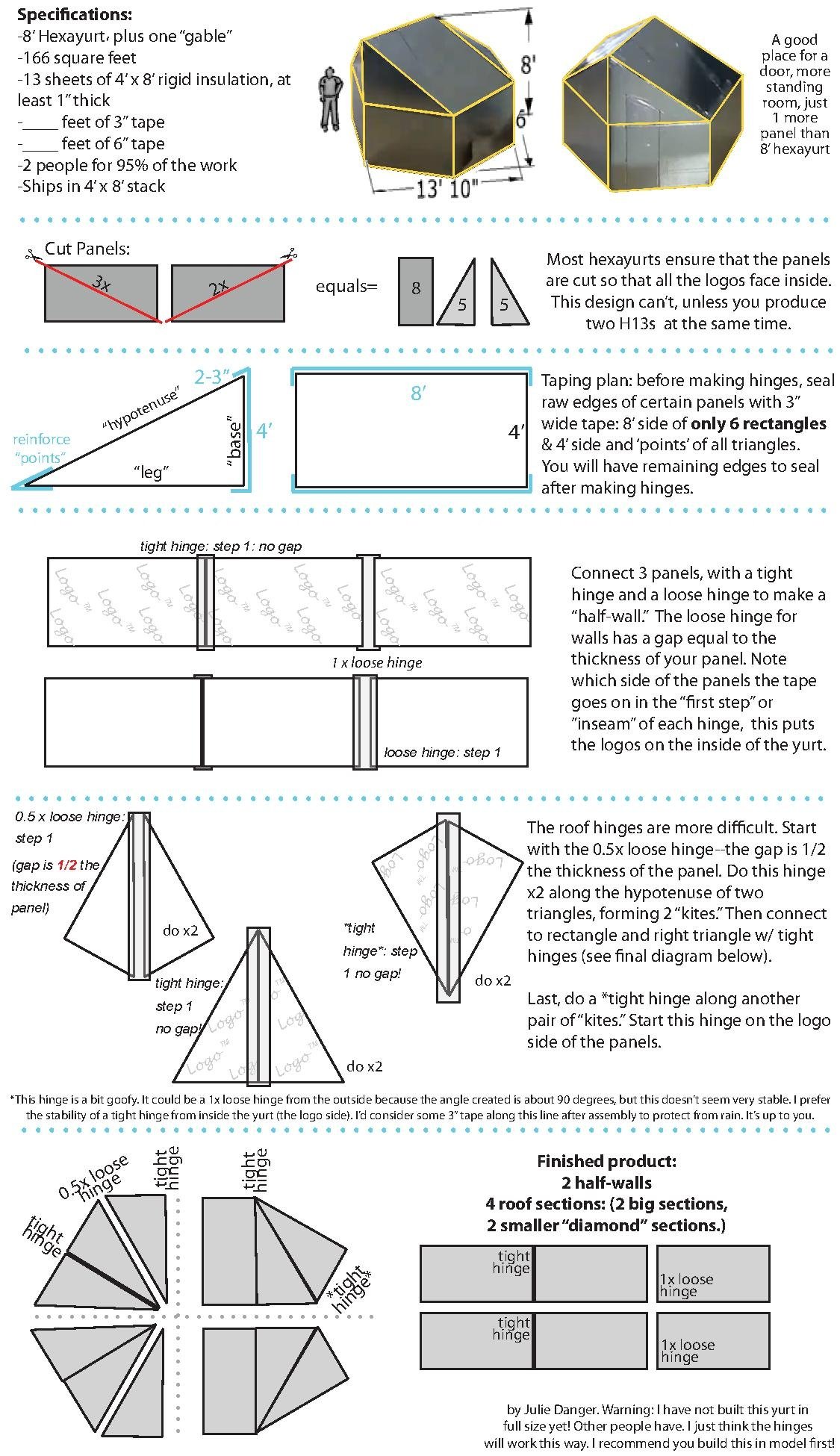 can serve as a guide for making an H13 hexayurt, with the option of using the Camp Danger Hexayurt Hinge Technique. Hinges make the yurt prefabricated and semi-folding using only tape, meaning much less construction work, no mitering required. The Camp Danger Hexayurt Hinge Technique site gives instructions on creating the tape-hinges described in the PDF; between those two resources it should be very easy to create an H13 as a semi-folding yurt. Here's a fairly mediocre video of a Camp-Danger H13. Warning: this shape yurt has not yet been built full scale using hinges, but it should work. Also, don't forget to go to the hexayurt playa page for a full discussion of hexayurt materials, transport, and other building ideas for doors and windows and such.

Step by step instructions for a slightly modified semi-folding design are listed below. This design uses only tight hinges on the roof to produce two roof pieces (rather than four) that need to be combined at assembly. (One drawback here is: by not making loose hinges at the roof "hips" or "gables," you make a trench for rainwater to enter the hexayurt.) Camp Danger Hinges are used, so make sure you read and understand the Camp Danger Hexayurt Hinge Technique page first. Disclaimer: It is highly recommended that you first build a small scale model of the hexayurt from rectangular panels of 1:2 height/width ratio, and some thickness (not cardboard). Only a limited number of H13s have been built so far, and none of them have been tested on Burning Man yet. Some concerns have been raised about stability. Make sure you do not cut corners, and over-engineer. At least one person has reported that the design documented here works and is stable.

You will need 13 sheets of 4’x8’ rigid insulation panels, at least 1’’ thick. You will also need some 3’’ tape for covering edges, and some bidirectional 6’’ tape to build the hinges. The exact amounts required can be calculated using the information below. Remember to get plenty more tape for mistakes, last minute patch ups, and covering doorways and windows.

You will then have 8 rectangular full panels, 4 “left” panels, and 6 “right” panels. Flip one of the right panels so that the logo goes on the outside, which will give you 5 left panels and 5 right panels, as shown. Right panels are marked with a “*” in the drawings below. 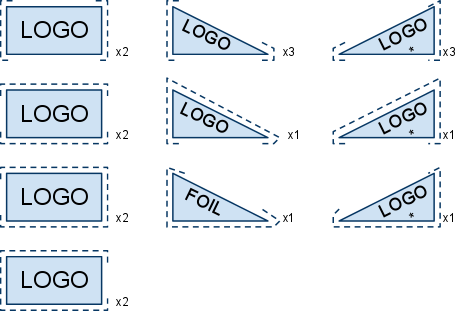 The drawing above is showing the logo’ed sides of the panels, and thus is the view from the inside when the left-most panel is attached to the right-most panel. The tight hinges are taped from the inside first (with no gap), which means the logo’ed sides close on each other. The loose hinges are taped from the outside first with a gap equal to the thickness of your panels. For the loose hinged edges, the non-logo’ed sides will close on each other so that another panel can be placed in between. This gap ensures that these hinges can also partially turn inside to form one of the vertices of the hexagon. Repeat this step twice to get two half-wall pieces. Optionally, you can combine all six wall-panels with alternating tight inward hinges and loose outward hinges, too. This option will lead to less taping on site, but it will also create a quite bulky single-wall piece. 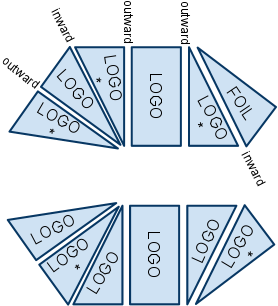 Again, the drawing is showing the inside of the roof, which is mostly logo’ed. When building a single H13 from 13 panels, it is unavoidable that one half-panel (the one marked as showing the “FOIL” side in the drawing) will have its logo side showing from the outside. If this is a concern (if this is for Burning Man, for example), this triangular panel can be taped over to hide the logo.

This design uses only tight hinges on the roof to produce two pre-taped pieces to be combined at the assembly site. Some of the hinges are taped from the inside first, and they thus can only turn inward, while others are taped from the outside first, and thus can only turn outward. It is a good idea to tape some perpendicular straps on outward hinges from the outside in order to not rely too much on sideways adhesive strength of the tape. --While any hexayurt can be done with just alternating tight hinges, the File:H13 Instruction.pdf Camp Danger H13 PDF guide will show you the use of some loose hinges. Loose hinges, at points of the roof where the hypotenuses of the triangles cause the roof to angle, will provide better rain protection (tight hinges here make a large gully in the roof) and better strength (because the loose hinge's angle stabilizes against gravity and cannot open further. Odd considering it's called a loose hinge. But it's for real--try both ways in the form of your model and see what you prefer.)

Step 5: Do a mock-assembly[edit | edit source]

Using less tape than needed for full assembly, try a mock assembly to make sure everything works. Tape the walls together from the 4’ ends to form the hexagonal wall base. Lay out the half-roof pieces as in the drawing, and tape the closest symmetrical edges together. The roof should rise up towards the camera.

Turn the roof over so that the outside is facing upwards. Get a few more people, and tape the roof on top of the hexagonal wall-base. This should look somewhat like:

Cut out doors, windows, or any other openings. Decorate and paint, or personalize any other way you want. Make sure you cover any exposed panel guts with 3’’ tape.

Regular 8' hexayurts are built with 12 panels: 6 for the walls, and 6 (cut through the diagonal to make triangles) for each of the parts of the roof. If the panels are 4' x 8', then the roofs goes from 4' to 8' at its peak. Height of human adults is between 5' and 6', so there is proper standing room in, say, slightly over 50% of the floor.

The (currently theoretical) H14, which uses 14 panels to put the same "gable" shape as the H13 on both sides of the hexayurt, has even more standing room: more than twice the available standing room of the good old H12. 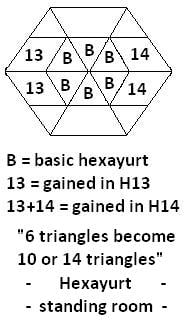 Vinay Gupta's blogpost on building an H13 out of plywood has a video walking through the ready building and a picture of the yurt.

Here is a great blog post about a plywood hexayurt that's been up for years as a working building on a farm!