This page is currently UNDER CONSTRUCTION ((with missing stuff signaled with double brackets like this)). Don't trust for building unless you make a CARDBOARD + PINS model first. Contribute questions and clarity if you can, maybe in the Discussion page. See you in a month, and good luck! LucasG 11:07, 28 July 2011 (PDT)

Before you start[edit | edit source]

Do watch the videos, and have a look at the links[edit | edit source]

((I've taken some snapshots from some of the videos in order to have still pictures for this wiki page.))

If power tools are available, use them. You'll need them to: 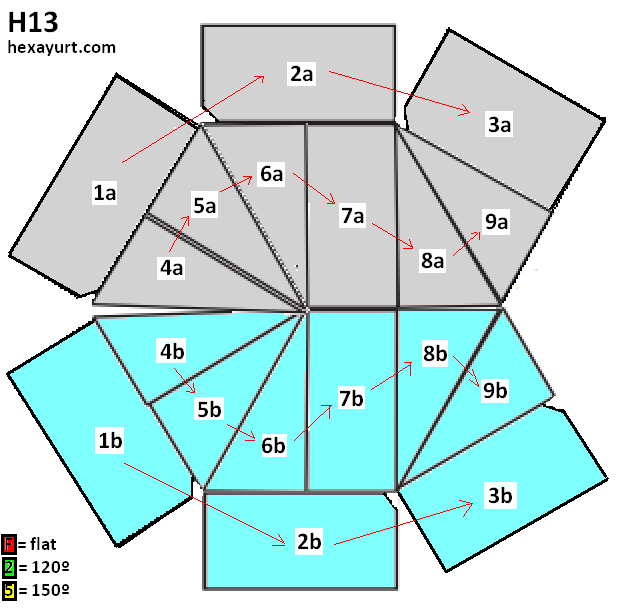 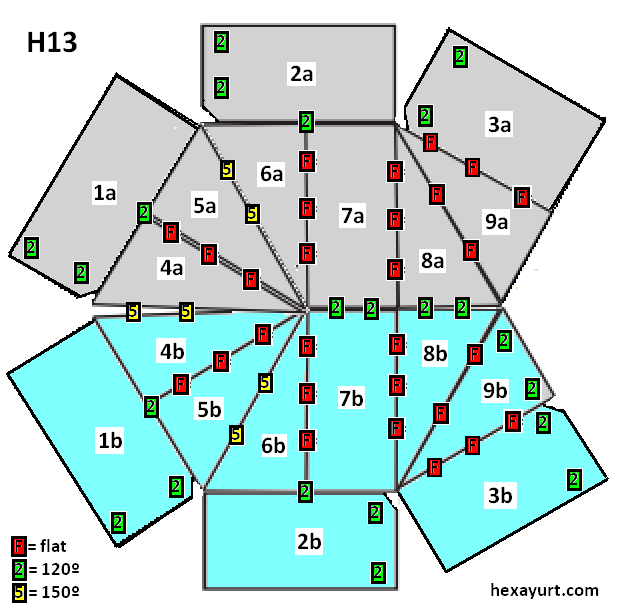 Polyiso panels are used full-size with no overlapping, but plywood is different.

((The following needs to be checked visually against the video above. "With enough eyes, all bugs are shallow" - Linus Torvalds. So thanks for double-checking!))

As for the normal roof cone - obey the normal order ((this needs further clarification, but for the moment look at the pictures, the video, and try with cardboard models and pins)), until you get to panel 7. 7a and 7b both go *over* 6a and 6b, then 8a and 8b go over 7a and 7b. At the top, along the roof line, 6a-7a-8a extend over 6b-7b-8b.

If the boards are trimmed, a little slot taken out of 7b and 8b, the whole thing should fit tightly at the roof line. The slot is analogous to the roof cone trimming. Let me try to explain.

Basicaly, where 6a overlaps 7a, there's a section where the wood is two layers thick. 7b is pressed against 7a, but at that point of overlap, 6a gets in the way. 7b is trimmed so that 6a doesn't get in the way. You wind up cutting a piece the thickness of one piece of plywood, and as wide as that overlap, out of the top right corner of 7b so that 7b can fit tight against 7a, basically.

This will probably make sense in a model if you overlap the pieces in the model ((this is what Vinay says - do so while further clarification and pictures are brought into this page - or better still, you bring the pictures and the clarity, thanks! LucasG 11:01, 28 July 2011 (PDT))).

((number)) 2" deck screws. Any head is fine. Non-countersinking screws are better because they don't weaken the plywood wood where the screw is by crushing it or cutting into it. "Wafer head" seems to be the name for these, but I (V) have never found them locally, so I use regular deck screws!

Sri Lankan corners: cut off one 6-inch corner of each of the 6 panels that will make the walls. This is called the "Sri Lankan corner" because it was invented in Sri Lanka. ((picture))

If you want to cut a window or two in one of the panels, this is when you do it, but make sure you don't cut through the edge of the panel, so that structural integrity is retained.

Cut triangles: 5 panels, through the diagonal.

Place the walls as an hexagon. To do this, you start by marking the hexagon with a string: place a peg at the center and draw a circle that's 7.5 feet radius, then use the radius from one point in the circle to mark the six corners of the hexagon. Each wall doesn't begin where the previous one ends, but 6 inches before (see figure).

Maybe place blocks and make sure they are aligned with the horizontal plane, with communicating vessels?

Start with 2-inch by 4-inch wood and cut 12 blocks. Each of the blocks has a 120º angle. There will be 2 blocks in each corner, one near the ground and the other near the roof.

Screw the blocks to join the walls together. ((XXX-number)) of 2" deck screws are needed for each block. 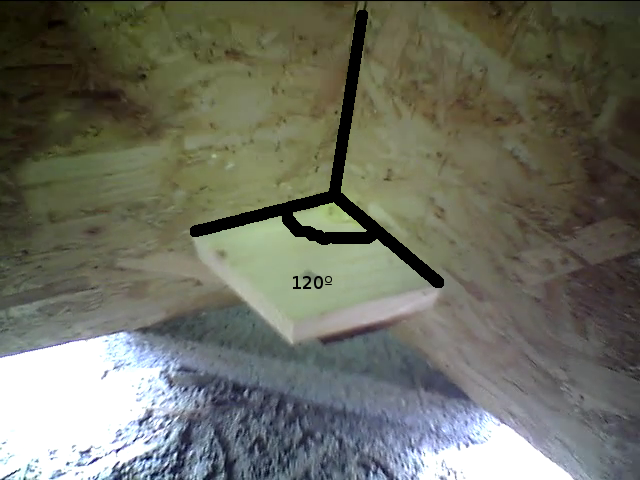 The roof is built from the back forwards.

Because we have the nice vertical boards, 9b goes in last, and can be screwed into place from the outside, so nobody is left stuck inside of the hexayurt in the same way as you get with the normal roof cone construction. This is very important and it's a much easier build because we don't have the same problems getting to the last two boards.

When the roof is lifted and put on the walls, however, 9a/9b tends to fall over 3a/3b because, well, there's nothing to stop it! On the rest of the sides, the roof cannot fall past the walls because the roof is at an angle. But these two wall pieces are both vertical, so it falls straight past. I think the answer is to put an 8' high 2x4 piece inside the roof, wedged up against the point to hold it up while the walls are lined up, then screw 9b/3b and so on (ah, that will be 3 more flat blocks each), and then screw the 8' 2x4 piece of wood into the vertical part to hold the point of the roof stable. ((V, please chech that the names of the panels and triangles referred to in this paragraph are okay! Thanks, LucasG 11:04, 28 July 2011 (PDT)))

This is just my (V's) best guess, of course, we're going to need to build a few more before we're completely sure! But the key is that it's actually easier than the regular version.

Also we haven't figured out the best way to do a door yet.

Figure: Near the hand there's the head of a screw, and symetrical to that there's another screw. Both are screwed through the panels to the 150º block. Three blocks per seam.

Beyond the very basics[edit | edit source]

Windows are easy: cut them before building the walls, don't cut the edge of the panel or you'll lose structural integrity.

((That's very local. As usual, have a go at it, ask the locals, document your solutions, thank you very much.))

Suggestion: Get IKEA to sponsor a designer to create visual sequence of assemply instructions (multi-lingual, does not assume literacy)

Page data
Retrieved from "https://www.appropedia.org/w/index.php?title=Hexayurt_project/_Hexayurt_H13_Plywood&oldid=601292"
Cookies help us deliver our services. By using our services, you agree to our use of cookies.
Category:
Maintenance categories:
Comments
Privacy policy · About Appropedia · Disclaimers · Mobile view · Content is available under CC-BY-SA-4.0 unless otherwise noted.
</html