There's a substantial amount of text at the discussion page. It will be restored gradually as soon as the outline is clear. Use it now if you wish. LucasG 07:49, 24 July 2011 (PDT)

Plywood hexayurt is the catch-all term being used for the family of frameless hexayurts constructed out of plywood or similar materials. The most notable alternative is OSB. They are not to be confused with the Timber Frame Hexayurt. Plywood Hexayurts lack any form internal framing. 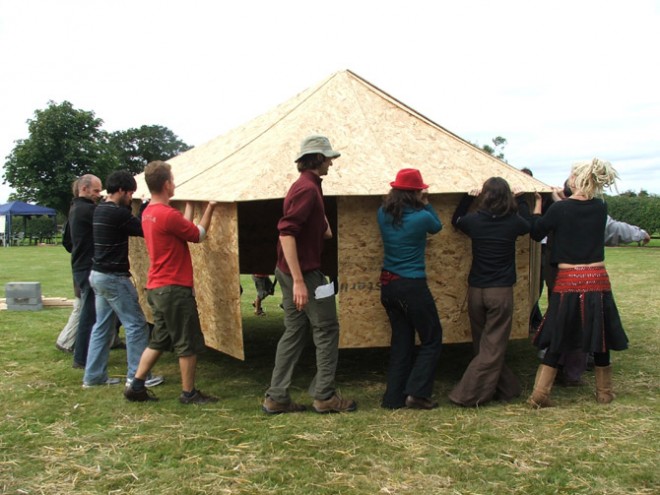 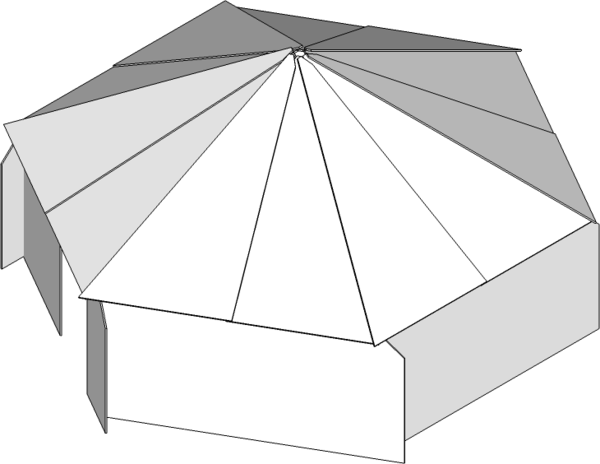 This is the primary hexayurt solution for disaster relief situations due to the materials used and ease of constructions. For disasters in extreme cold, use isulation board and the construction instruction in Hexayurt Playa

Hexayurts are basically made of panels and connectors. The design has been modified extensively because of issues that arise from constructing out of plywood with no frame. The concerns of Water-proofing, insect-proofing, fixing to the ground and portability are different from that of the more common polyiso hexayurt.

If the panels are from wood, then:

If unclear refer to the Sketchup model or videos in the links section.

2 all constructions stages except ‘Stage 4: lifting the roof’

≈18 for Stage 3: lifting the roof. Number depends on strength of the people and material used. Plywood is approximately 40kg a sheet and OSB is 20kg a sheet. So the roof can weigh 240kg or 120kg. You want a maximum of 15-20kg per person. Lasts roughly 5 minutes

6× 47mm×100mm lengths of 2m long carcassing timber or similar. This is approximately 2inches by 4 inches so please note that a lot of lumber called as “2 by 4” DO NOT actually measure 2”×4” for historical reasons.

1-2× Tarpaulin for floor and to cover the roof

Note: Always screw from the plywood into the block Use 2 screws are needed for each block face that meets a board.

Mark out a hexagon. First use the string to mark out a circle with a radius of 2.2m. Once the circle is drawn, mark one spot on the edge, put one end of the string there, and mark where the other end of the rope crosses the circle. Now start from that point, and mark the next crossing point. Continue all the way around to make the hexagon. Alternatively, hold the string in the middle and mark every 60°.

Cut off one 25cm corner of each panel. This is called the "Sri Lankan corner" because it was invented in Sri Lanka.

Cut a door and window(s) in one of the panels.

Cut 24 blocks at an angle of 120º angle. 18 are used for the walls. Safe the other 6 for later. There will be 3 blocks in each corner, one near the ground, one near the middle and the other near the roof.

Screw the blocks to join the walls together. The walls are not joined edge to edge, imagine a straight line down from the end of the "Sri Lankan Corner" and use this as the edge

Line up the corners to the hexagon you marked out.

Cut each of them in half through the diagonal. Note: Some materials have a water resistance coating on one side. If so you will want to make two piles of 3 cut each pile along different diagonals for each pile

Trim off the point of each of the 12 triangles. First measure 15cm from the tip along the medium length side of the triangle and cut it straight off. Then measure 10cm further along the same side and cut from that point to the middle of the new tip.

Use 2 triangles to create each of the 6 roof-pieces. This is done by overlapping 2 triangles by the width of a block (roughly 50mm). Use 2 blocks.

Join the roof pieces with the 150º blocks. Make sure that they are lapped properly. The to piece should protrude by 50mm. Use the center of the roof as guidance to how far up or down the individual roof modules should be slided before your screw in the screws.

They then carry the roof toward the hexagon slowly. When near the wall, allow Group 2 to pass the load onto Group 1 and then move out of the way. Group 2 then moves around to the side with the door ready to receive the load again.

Lower the roof into place and secure with the leftover blocks from Stage 1. Add additional screws at the corners, through the roof and into the top wall blocks.

A plywood hexayurt with reinforced corners and anchoring to the ground for high wind conditions.

The plywood version of Scott Davis and Dylan Toymaker's H13 design. Using one more sheet of plywood and switching the arrangementof the roof panels results in a structure with a full 8′ entry-way, much more interior walkable space SUP PEPLZZZZZ!!!!!!!!!!!!!

When screwing the block at the edges with an overlap, Screw the block to the sheet that is at the edge first. Leave about 1cm between the corner of the block and the edge of the sheet. Then screw the other sheet in place. this will "pull" the sheets tighter than if done the other way.

Screw four blocks near the corners of the door so that they overhang a little bit and give a lip for the door to rest on On the inner side screw two block around the middle. Secure one side with two screws. For the other side use only one screw, position he block and the screw so that dependent on the orientation the block it will either hold the door in place or allow it out. This will allow the door to “locked” from the inside until more permanent measures are in place Add a last block to the door as a handle. Diagrams pending

Take a sheet of paper, fold it in half and then half again. Now fold in a ‘Z’ it into thirds. Unfold and you now have a sheet that can be used to measure any multiple of 30°.