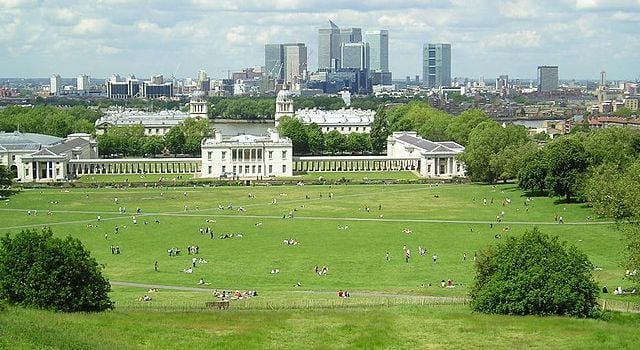 To mark the Diamond Jubilee of Elizabeth II, Greenwich became a Royal Borough on 3 February 2012, due in part to its historic links with the Royal Family, and to its UNESCO World Heritage Site status as home of the Prime Meridian.

Greenwich Students' Union is the university's students' union. In October 2019, the GSU Student Assembly voted to ask the university to declare a climate emergency and for the university and union sustainability strategies to consult with students in creating them. This call to action aimed to speed up the university's efforts at becoming carbon neutral. W

The Royal Borough of Greenwich has over fifty parks and open spaces within its boundaries. The Green Chain W, a linked series of linear and circular walks, include some of those open spaces within Greenwich. The Chain originates at three points along the River Thames and stretches to Crystal Palace Park. Greenwich is a riverside borough, and one of the largest open spaces is the Thames itself, forming the northern boundary of the borough. A sign posted riverside trail W forms a walkway for both pedestrians and cyclists. W

Page data
Retrieved from "https://www.appropedia.org/w/index.php?title=Greenwich_community_action&oldid=641632"
Cookies help us deliver our services. By using our services, you agree to our use of cookies.
Categories:
Maintenance categories:
Comments
Privacy policy · About Appropedia · Disclaimers · Mobile view · Content is available under CC-BY-SA-4.0 unless otherwise noted.
</html