From Appropedia
Redirected from Gabon 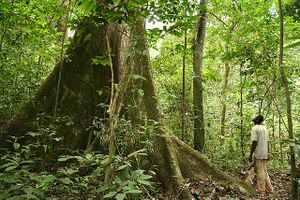 Gabon (; French pronunciation: ​[ɡabɔ̃]), officially the Gabonese Republic (French: République gabonaise), is a country on the west coast of Central Africa. Located on the equator, it is bordered by Equatorial Guinea to the northwest, Cameroon to the north, the Republic of the Congo on the east and south, and the Gulf of Guinea to the west. It has an area of nearly 270,000 square kilometres (100,000 sq mi) and its population is estimated at 2.3 million people. There are coastal plains, mountains (the Cristal Mountains and the Chaillu Massif in the centre), and a savanna in the east.

Gabon is noted for efforts to preserve the natural environment. In 2002, President Omar Bongo Ondimba put Gabon firmly on the map as an important future ecotourism destination by designating roughly 10% of the nation's territory to be part of its national park system (with 13 parks in total), one of the largest proportions of nature parkland in the world. The National Agency for National Parks manages Gabon's national park system. W