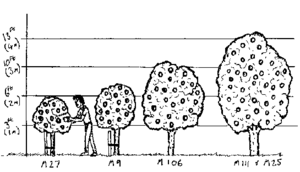 Propagation of fruit trees is usually carried out asexually by grafting the desired variety onto a suitable rootstock.

Perennial plants can be propagated either by sexual or vegetative means. Sexual reproduction occurs when male pollen from one tree fertilises the ovules (incipient seeds) of the flower of another, stimulating the development of fruit. In turn this fruit contains a seed or seeds which, when germinated, will become a new specimen. However, the new tree will inherit many of the characteristics of both its parents, and it will not grow 'true' to the variety from which it came. That is, it will be a fresh individual with many unpredictable characteristics of its own. Although this is desirable in terms of increasing biodiversity and the richness of the gene pool (such sexual recombination is the source of most new cultivars), only rarely will such fruit trees be directly useful or attractive to the tastes of humankind. A tendency to revert to a wild-like state is common.

Therefore, from the orchard grower or gardener's point of view, it is preferable to propagate fruit cultivars vegetatively in order to ensure reliability. This involves taking a cutting (or scion) of wood from a desirable parent tree which is then grown on to produce a new plant or 'clone' of the original. In effect this means that the original Bramley apple tree, for example, was a successful variety grown from a pip, but that every Bramley since then has been propagated by taking cuttings of living matter from that tree, or one of its descendants.

The essentials of our present methods of propagating of fruit trees date from the time of the Romans, who were apparently the first to discover grafting. Classical authors wrote extensively about the technical skills of fruit cultivation, including grafting techniques and rootstock selection. The oldest surviving named varieties of fruits date from classical times.

The simplest method of propagating a tree asexually is rooting. A cutting (a piece of the parent plant) is cut and stuck into soil. Artificial rooting hormones are sometimes used to assure success. If the cutting does not die of desiccation first, roots grow from the buried portion of the cutting and it become a complete plant. Though this works well for some plants (such as figs and olives), most fruit trees are unsuited to this method.

Root cuttings (pieces of root induced to grown a new trunk) are used with some kinds of plants. This method also is suitable only for some plants.

A refinement on rooting is layering. This is rooting a piece of a wood that is still attached to its parent and continues to receive nourishment from it. The new plant is severed only after it has successfully grown roots. Layering is the technique most used for propagation of clonal apple rootstocks.

The most common method of propagating fruit trees, suitable for nearly all species, is grafting onto rootstocks. These are varieties selected for characteristics such as their vigour of growth, hardiness, soil tolerance, and compatibility with the desired variety that will form the aerial part of the plant (called the scion). For example, grape rootstocks descended from North American grapes allow European grapes to be grown in areas infested with Phylloxera, a soil-dwelling insect that attacks and kills European grapes when grown on their own roots. Grafting is the process of joining these two varieties, ensuring maximum contact between the cambium tissue (that is, the layer of growing plant material just below the bark) of each so that they grow together successfully. Two of the most common grafting techniques are 'whip and tongue', carried out in spring as the sap rises, and 'budding', which is performed around July and August. 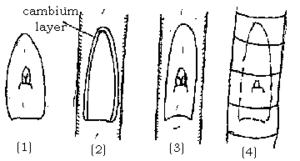 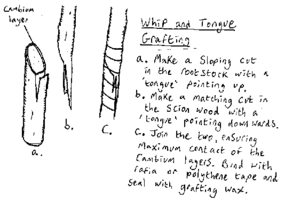 Another reason for grafting onto rootstocks is that this enables the grower to determine the tree's eventual size. Apple tree rootstocks are referred to by numbers prefixed by letters indicating the developer of the rootstock. "M" or "MM" indicate East Malling, a pioneer in the development of dwarfing rootstocks.

Rootstocks most often used, in order of eventual size, are;

The Malling-Merton series have been standard rootstocks for apples until recently. Now some are being replaced by new developments, including the Cornell-Geneva series. Some new rootstocks based on Siberian crab are being used in colder areas for more cold tolerance.

Pears are usually grafted onto quince rootstocks, which produce small to medium sized trees. Some varieties however are not compatible with quince, and these require double working. This means that a piece of pear graft-work compatible with both the quince rootstock and the pear variety is used as an intermediate between the two. If this is not done the pear and the rootstock could eventually separate at the graft. Varieties that require double working include 'Bristol Cross', 'Dr Jules Guyot', 'Doyenné d' été' and 'Williams Bon Chrétien'.

Until the 1970s, cherries were grown of the vigorous Malling F12/1, Mazzard (Prunus avium), or Maheleb (P. maheleb) rootstocks, which required much space and time before cropping began, thus the growing of cherries was not a realistic option on a garden scale. The introduction of the rootstock 'Colt' enables trees reaching a maximum height of 12 to 15 ft (4 to 5 m) to be grown, and if trained as a pyramid it is possible to restrict growth to about 10 ft (3 m). The popular sweet variety 'Stella' could even be grafted onto a 'Colt' rootstock and successfully grown in a pot on the patio.

Some species of fruit are commonly grown on their own roots; new plants are propagated by rooting, layering, or modern tissue-culture techniques. In these cases there are may be no great advantages to using a special rootstock or improved rootstocks are not available. Fig, filbert, olive, pomegranate, gooseberry, bramble, and other fruits are commonly grown without any special rootstock.

Though vegetative propagation of apple, pear, stone fruits, and many other species is a nearly universal practice, it does have some detractors. Here is an account of one advocate of own-root fruit trees.

Permaculture designer and fruit nurseryman Phil Corbett has for a number of years been working on an innovative project involving growing fruit trees on their own roots. His work is based on research carried out by Hugh Ermen of the Brogdale Horticultural Research Station, home of the National Apple Collection. Corbett writes; "Hugh discovered that there are several advantages in growing apples on their own roots -- that is, not grafted onto a rootstock. The graft union, which is a union between two genetically different individuals, always creates a degree of incompatibility. Not having this incompatibility, own root trees were found to have better health and better fruit quality. The only disadvantage of own root trees is that most varieties are more vigorous than is usually wanted. This means that trees may make a lot of wood at the expense of fruit bud production, giving big trees that take a long time to come into crop. Conventionally this vigour is controlled by grafting onto a dwarfing rootstock. With trees on their own roots, however, a number of traditional techniques can induce early cropping. Once cropping begins, the tree's energies are channelled into fruit production and growth slows down to a controllable level. The techniques that are usually sufficient to bring about cropping are:

Once cropping has begun, a normal feeding and watering regime can begin. The average cropping own-root tree can be maintained at a size very similar to the same variety on MM106 rootstock" (Phil Corbett, from The Common Ground Book Of Orchards, pub Common Ground, 2000).

He is also conducting research into the 'coppice-ability' of own-root fruit trees, including an experimental 'Coppice Orchard' project, wherein own-root trees are planted in north-south rows; "When the canopy of the orchard closes, a north-south row will be coppiced and the land in the row used for light demanding crops while the trees regrow. The trees on either side of the glade will have higher light levels on their sides and produce more fruit buds". Over time a series of parallel sheltered glades will be created which will be coppiced on a rotational basis, allowing for multifunctional use of land in order to produce not only fruit but also small wood products, soft fruit, vegetables and even possibly cereals, fungi and the more traditional bees and poultry. This is a project with much promising potential, and deserving of attention from the wider organic growing movement for the valuable lessons that will no doubt be provided over time.