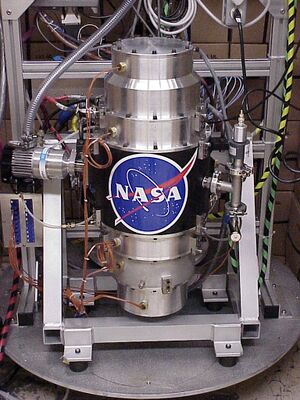 Flywheels can be used to store kinetic energy.

Energy storage is accomplished by devices or physical media that store some form of energy to perform some useful operation at a later time. A device that stores energy is sometimes called an accumulator or battery. Energy storage involves converting energy from forms that are difficult to store to more conveniently or economically storable forms.

A unique characteristic of electric power is that the amount of electricity generated is fixed throughout short periods of time, yet the electricity demand rises and falls throughout the day (this fluctuation in energy demand is often referred to as "the duck curve"). The development of efficient and fiscally accessible energy storage technology that allows electricity or thermal energies to be available to meet demand anytime would be a great breakthrough in global electricity distribution. Energy storage devices help in meeting the goal by managing the amount of power needed to supply customers at the time when energy needs are greatest, during what is called "peak load".

High voltage electronics, such as switches, inverters, and controllers allow electricity to be efficiently controlled for long distance transmission, a feature that allows the system to respond quickly to disturbances and to operate smoothly, thus reducing the need for additional infrastructure.

All forms of energy are either potential energy (e.g. Chemical, gravitational, electrical energy, etc.) or kinetic energy (e.g. thermal energy). A wind-up clock stores potential energy (in this case mechanical, in the spring tension), a battery stores readily convertible chemical energy to operate a mobile phone, and a hydroelectric dam stores energy in a reservoir as gravitational potential energy. Ice storage tanks store ice (thermal energy) at night to meet peak demand for cooling. Fossil fuels such as coal and gasoline store ancient energy derived from sunlight by organisms that later died, became buried and over time were then converted into these fuels. Even food (which is made by the same process as fossil fuels) is a form of energy stored in chemical form.

Some of the most frequently used energy storage devices are(regular or deep-cycle) lead-sulpheric acid-batteries placed at the home to overcome the regular power outages that occur in developing countries (as power plants in many developing countries don't always operate continuously like in developed countries). The advantage of these is that they are very easy to hook up to existing electrical systems and ie PV-solar panels.

Examples of energy storage are rechargeable batteries (which store chemical energy readily available to convert into electricity), hydroelectric dams (which store energy in a reservoir as gravitational potential energy), and ice storage tanks (which store ice frozen by cheaper energy at night to meet peak daytime demand for cooling). Fossil fuels such as coal and gasoline store ancient energy that has been derived from sunlight by the organisms that later died, became buried, and over time have converted into these fuels. Food could also be considered a form of stored chemical energy.

Other techniques (mentioned in the above linked document) are to use electricity to create a (combustible) gas, use electricity to move a weight (ie stones, water, ...) and then allow the water, stones, ... to power an alternator/dynamo at a time when electricity is wanted. Mobile devices are often powered using small electrochemical cells.

As mentioned above, there are myriad ways to store potential or kinetic energy for later use. Some more specific examples are: