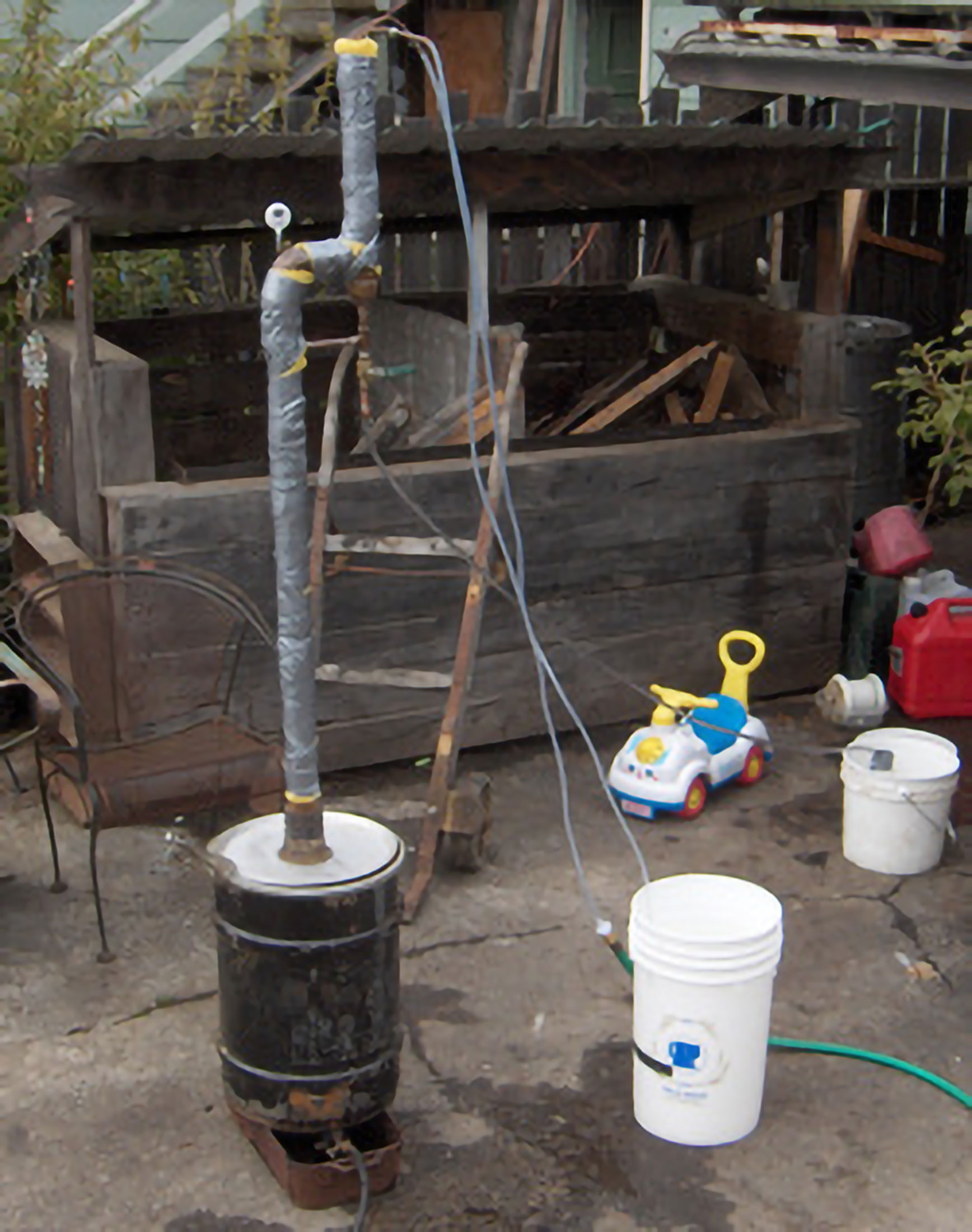 I made this still to determine the cost inputs and energy outputs of small scale ethanol production from local and conventional sources. I used this still to compare the costs and efficiencies of ethanol from organic sugar beets versus refined cane sugar. 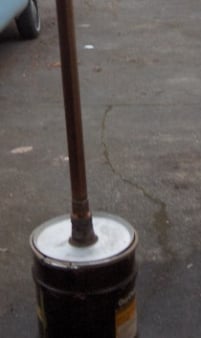 The 10 gallon boiler and 3 ft tall column made of 2 in diameter copper pipe. 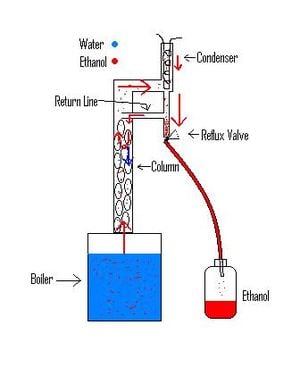 A valved reflux still sends a portion of the re-condensed distillate liquid through the return line and back to the column where it is re-distilled. Upon being re-distilled, it cools down the column packing so that the water vapor condenses and drips back to the boiler. Thus more pure alcohol goes to the condenser before collection.

There are many different types of ethanol stills that output a variety of alcohol percentages. I choose a still design that is capable of making high percent alcohol which requires less dehydration before being used as a fuel. An ethanol still heats the mash to the boiling point of ethanol 78.5 oC. The ethanol vaporizes out of the mash mixture leaving behind water and solids. The ethanol vapor then passes a cooling condenser that lowers the temperature so that the ethanol turns back to liquid before being collected. Although the boiler temperature stays below 100 oC, some water vapor comes out with the ethanol. The stills job is to remove water vapor and send it back to the boiler.

I choose to make a Valved Reflux Still. I began by making the boiler from a 10gallon barrel found at the scrap yard. I welded a brass flange and attached a 2ft long piece of 2in diameter copper tubing for the main column. I packed eight Stainless Steel scrubber pads into the column to act as packing which slows down the rising vapor and adds surface area to cool rising water vapor. As the water vapor cools on the packing it condenses and falls back down to the boiler. On the Top of the still I used a 90 degree elbow and a T joint, both connected together by a 3in long piece of the 2in tubing. A thermometer is inserted into a soldered sleeve on top of the 90 degree elbow.

The condenser slips into a 17in long pieces of 2in pipe attached to the top of the T joint. The condenser is made from 14ft of 3/16in tubing coiled around itself with both water inlets and outlets at the top. The inlet for cooling water going straight down the middle and then coils around itself back to the top. The condenser is hooked up to a garden hose that flows through at a rate of.6liter/min. The ethanol vapors rise up to the condenser and re condensate to liquid. The liquid drips down through bottom of the T joint and through a 1/2in diameter reducer. This is connected to the top of a 1/2in T joint that has a valve on the bottom and a return line coming from the side of the T back to the column. When the valve is closed, the liquid pools up and overflows back to the main column through the return line. The liquid drips on to the top of the stainless steel scrubber pads and cools them down. Thus less water is able to get through the top of the column before returning to a liquid state and the distillate collected is higher percent ethanol. The process of sending a portion of the distillate back to be re distilled is called reflux. The amount or reflux is controlled by closing and opening the valve. The distillate allowed to pass through the valve is collected in a jar as liquid ethanol.