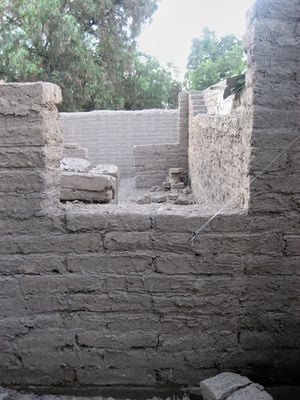 The DIF wanted to construct a space for the viejitos of Parras who do not have families to be able to relax and enjoy a meal and the company of others, and enlisted the help of the HSU Parras program.

Who: Three HSU students, Hannah, Jaqui, and Heather (project leaders), a government clown, and two DIF employees, along with help from the rest of the Parras AT group.

What: In Parras, Coahuila, at the DIF, a Mexican federal social service center, a project to construct a structure for senior citizens began in 2006. Our mission: to complete it and add an extension for a small kitchen, as well as a roof and porch.

Why: The DIF wanted to construct a space for the viejitos of Parras who do not have families to be able to relax and enjoy a meal and the company of others, and enlisted the help of the HSU Parras program.

How: The main room, or salon, had a completed foundation and 40cm of laid adobe walls, and about 550-600 adobe bricks were left over from the previous year, about 400 of which were usable for this year. In order to complete our project we had to dig and lay a new foundation for the kitchen, make as many adobe bricks as possible, and finish laying the walls for the entire building, as well as construct the proposed additions. 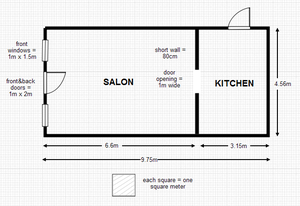 To begin we measured out the dimensions of the new kitchen and the existing walls, and also counted the number of adobe bricks already laid and those that could be salvaged from the previous year. We then developed our proposed process for the next five weeks. 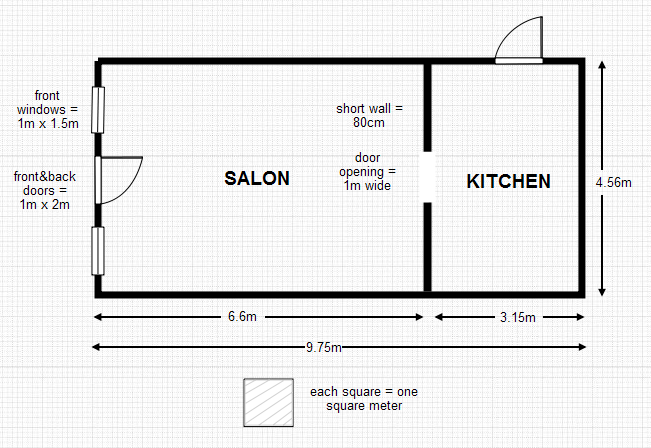 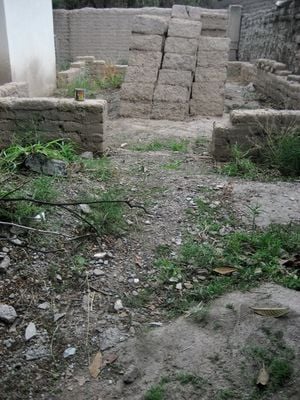 The site upon our arrival

We got familiar with the site, taking measurements and assessing the preliminary steps, and made a time table. We met with Ciro Liro, a clown and adobe expert, as well as two DIF employees, Bernardo and Adrián, who were in charge of procuring materials for us. At first a fire ant problem prevented us from digging out the foundation because the ant hill was located where we needed to dig. Ciro provided ant venom and after three days we were able to begin. 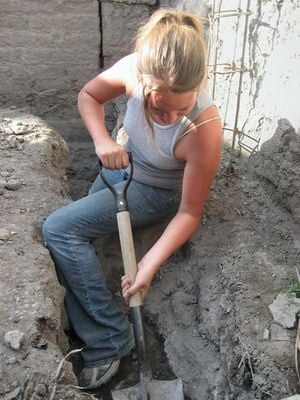 There was also a large amount of organic material that had grown inside the salon and needed to be removed, as well as a lot of inorganic material such as rusted rebar in the kitchen area. We wanted to ascertain the dimensions of the kitchen early, but due to scheduling conflicts with Ciro we were not able to measure it out until Sunday of the next week. 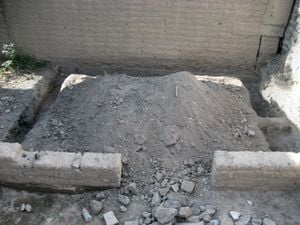 At last, the hole 'twas dug

We finally measured the dimensions of the kitchen and began to dig out the foundation, which was difficult due to three days of rain that week. There were a lot of old bricks and large rocks which we had to remove by hand from the ground, which slowed the process though the rocks were useful later for the foundation. We also came up against a cement wall and various protrusions of cement from the old adobe wall we were working against, which needed to be pickaxed to make room to shovel.

We also had not yet obtained a wheelbarrow, so a huge pile of dug-up dirt amassed next to where we were working and dirt routinely fell back in the hole we were digging. This week began our long, frustrating hunt for materials - mainly earth, aggregate, and cement, as well as the necessary tools (more shovels/pickaxes, wheelbarrows, etc). For lack of materials and the availability of our expert, we were hardly able to do anything at all.

It was no longer just Hannah, Jaqui and Heather for an entire week. We were fortunate to have the help of all eight students in the program, as well as our professors Lonny and Oona, and sometimes Ciro Liro. 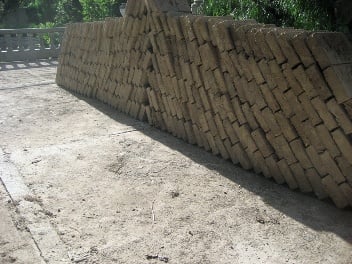 A window begins to take shape 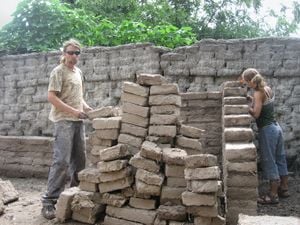 Build up corners first, then walls

On Monday the long-awaited cement finally arrived a full two weeks after it was expected, and along with continuing to build up the corners and walls of the salon we mixed and laid the underground concrete foundation. To do this we used shovels and made a pile of eight or nine shallow wheelbarrows of aggregate and made a shallow, oblong "dish", inside which we placed two bags worth of cement. We added water and thoroughly mixed with our shovels and pickaxes, then shoveled the mixed concrete in a wheelbarrow and dumped it into the foundation hole until the level of concrete was just underneath the top of the hole.

for information on how to do an above-ground foundation, see last year's explanation.

We tried to get a beam so that would support the front windows and door. Ciro said it was supposed to arrive on Tuesday. We continued building adobe with the bricks we made.

Issues: rain, lack of beam and more concrete, new adobe bricks were larger than old bricks: fitting them on was difficult.

After five weeks of hard work, our project is still not finished. We learned the value of receiving an expert opinion regarding the project, in its early stages. This way, a group can make one specific plan and stick to it very easily. Otherwise, different people's desires and plans can come into conflict, causing delays in receiving material and finishing the structure. Overall, our group worked to the best of our ability. We experienced problems with communication, which can be expected with a large group and linguistic barriers, but we learned how to make consensus decisions and troubleshoot on-the-spot using whatever knowledge was available.

Before conducting a plan of action, call up the Presidencia (or walk in yourself) and see if the expert, Ciro Liro, will be able to get enough time off work to help you with the technical processes. When meeting with your expert, your first question is not what you need to do, but what materials you need to complete the project. Talk to the DIF immediately about their budget, what money they actually have. Get the materials on your own schedule and tell the DIF they can reimburse you, no matter how far along in the ordering process they are. The earlier you get the materials, the faster work can be done. Ask (demand) to go with Bernardo or Adrián to get materials whenever possible.

What We Would Do Differently[edit | edit source]

Building adobe in a foreign country is more unpredictable than we ever could have imagined. Materials took weeks to appear. Our expert landed a new job that took most of his time. He was unable to help us most days. Three weeks into the project, the DIF employees tried to hire a new expert for us. Our new hope never showed up. We would have tried to find a new expert immediately if we had known that his schedule and ours would never coincide. Also, the materials were ordered through the Presidencia by the DIF employees, this chain of people made it very difficult to track where the materials were and if in fact, they had actually been ordered. We would have gone directly though the Presidencia ourselves so we would know if they actually had money. If we knew the money wasn't available immediately we would have bought the materials ourselves and later been reimbursed. However, the chain of messengers played a long game of telephone and we were told that the materials were ordered when they had not been.

All politics aside, which were a large part of our struggles with our project, we would have changed the sequence of events as well. The first week we finally obtained the dimensions of the kitchen and began digging the foundation. If we could have completed the kitchen foundation in the second week, we would have been able to accomplish much more building. The concrete was not ordered and in actuality did not appear at the site until the fourth week. The planks never came to the site. If we had gotten the planks and concrete the second week, we could have completed at least the below ground foundation. Then when we had 8 appropriate tech students working with us, we could have built up the above ground foundation much faster and then been able to build up the kitchen walls while building the living room walls.

Finally, if we had known that the concrete and planks were going to arrive so late, we could have scrapped the kitchen foundation building until the concrete had actually arrived. The first and second week, instead of digging, we could have organized bricks, obtained adobe mixture and started building. This way we could have easily had the walls built up on the living room in order to construct a roof the fifth week. Although we would have changed quite a bit about how the project was scheduled and organized, this project was incredibly rewarding and we learned much about Mexico socially and politically and of course, about how to natural build with adobe.