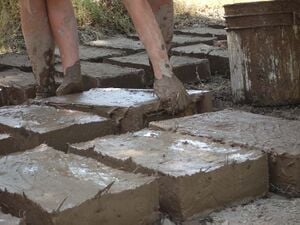 This 10 week project is a combination of social service and a comprehensive experience with natural building. The final goal of this project was to provide a refuge for homeless senior citizens within the compound of the Parras Desarollo Integral de la Familia (DIF) so that they can find shelter and companionship, as integration of the family and community is an important part of the Parras culture. DIF is a nation-wide government organization based in Mexico City. They are a social service organization providing communities with essentials such as childcare services, food drives, public education concerning etiquette, proper nutrition, child rearing, etc. while creating a community center and support network for those who need it.

The shelter was constructed out of Adobe, a natural building material that is widely used in desert areas such as in Parras, Mexico. By doing this project we hoped to raise public awareness of the benefits of using adobe. Adobe is a time-tested wonder, a building method that has low environmental impact, low overall cost and is ideal for warm climate area. This project also provided hands on natural building education for the participants of the Parras 2006 summer program and DIF volunteers. Throughout construction, we made efforts to recycle and reuse our materials.

The final construction of the adobe senior center consists of one large room measuring 4.4 x 6 meters. The adobe walls are 30 cm thick, making the building itself 5 x 6.6 meters. Approximately 1,300 adobes were needed to complete the shelter, and were made offsite. The building consists of one large community room which will be furnished with couches, tables and chairs and a TV (not complete as of November, 29, 2006). The DIF bathrooms and kitchen are in very close proximity to the senior center, therefore plumbing is not necessary for the building. 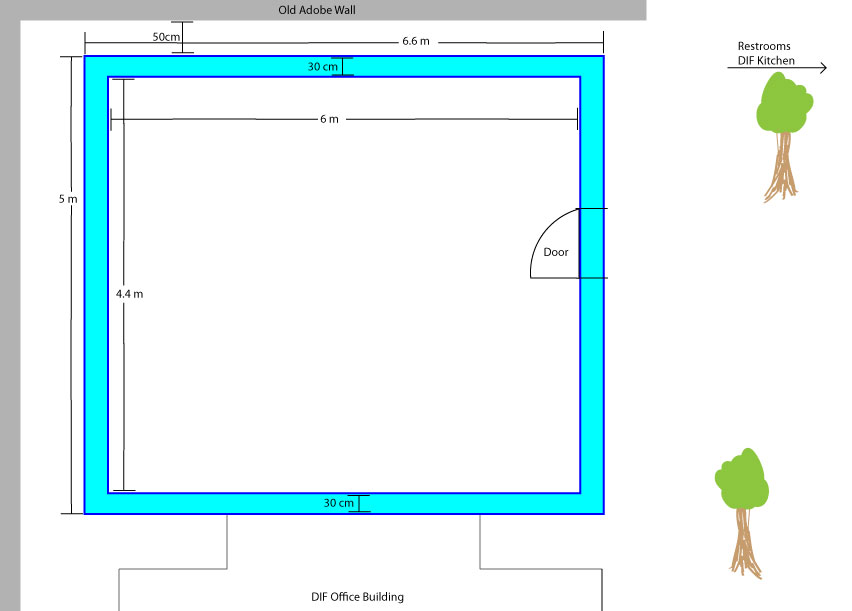 The following shelter was constructed in Parras de la Fuente, a small ranch town of approximately 44,000 citizens located in the northern state of Coahuila, Mexico. It was constructed in the far back right corner, behind the kitchen, of Parras DIF headquarters. The adobe bricks used to build the center were fabricated offsite from DIF. The fabrication site provided ample storage space to allow approximately 300 adobe bricks to dry per day. The bricks were transported to DIF after fabrication.

The total cost for both the aggregate and cement was 1,200 pesos.

The only paid labor on this project is for the expertise and guidance of Martin, aka Ciro Liro. He has had over a decade of experience with making adobe bricks and construction. Martin will receive 900 pesos paid by the municipal government of Parras. All other labor is purely volunteer.

Week One
The first step of the process was learning and perfecting the art of making adobes. Each day about 200 adobes were made in a three to four hour period with a group of about 15 workers. Each day the progress moved more quickly.

Week Two
With a quota of 1,300 adobes the adobe construction continued.

Week Three
The building site, having been neglected for some time, needed to be cleaned and prepared for construction. A dead tree was removed, an out-of-commission adobe oven was taken down, and all of the inorganic trash was taken out. The materials taken from the adobe oven were used to level the ground in the area.

Week Four
The three foot foundation of the adobe oven was removed. Before taking it down, the large rocks and sand filling it were taken out. The rocks were piled for later use in the foundation and the sand was saved to be used as mortar. Once removed, the walls were taken down with a sledge hammer.

Week Six
Tying string to the old adobe wall and the DIF kitchen and office buildings as points of reference, the perimeter of the building was established. Lime was poured over the string to mark the ground where the foundation would be. The following day the perimeter was dug about 60 cm (2 feet) deep, or until firm virgin soil was reached, and about a foot wide.

Week Seven
The foundation was filled using large rocks found on site and hand-mixed cement. Oiled wooden frames were set up in order to build the above-ground portion of the foundation.

Week Eight
During the final week, the walls were built approximately 3 feet high.

The building is currently, at least half built. Word from stakeholders, or Tybie should come by January 15, 2007. 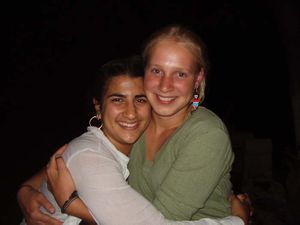 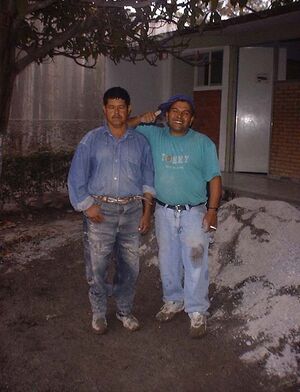