Clerck, a RepRap 3D printer hanging from the ceiling 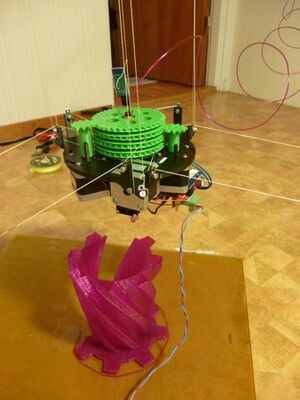 A RepRap 3D printer hanging from the ceiling.

The RepRap project first showed the world cheap small scale 3D printing in 2006. Their design was intentionally not very well thought out. The idea was that a 3D printer that could print its own parts would be improved through evolution like iterations, no matter the quality of the first design. This turned out to be quite correct, as a large community quickly grew around the first few RepRap designs. RepRap users started to experiment and remix all parts of the printer, including its Cartesian coordinate system.

All these printers tries to trade heavier geometrical computations for getting rid of hardware requirements or time consuming build steps. They all have frames, and there's still spare clock cycles left in their Arduino CPUs. The idea of the Hangprinter is to skip the hard custom frame altogether and instead rely on wire-connections to already-built rigid structures, like insides of houses. This design falls into the more general category of cable robots (see Wikipedia link).

Making this work would lead to potentially enormous print volumes for prices down to ca $300. Competitors' prices are:

Other large scale experimental printers include the Wasp's Big Delta Printer[11] and the KamerMaker, a scaled up Cartesian design.[12] Other experimental solutions for large scale printing include replacing the frame with line tracking capabilities and a support vehicle, like the Minibuilders.[13]

The presented competitors are very expensive and not very self reproducing, many of them are not even free design hardware. They don't satisfy the needs of for example the Open Source Ecology project, who wants to print structural plastic components like car body panels and redworm towers with OSHW tools.

The creator and the community are working on version 4 in September 2018. See new design goals from Tobben's blog

Design considerations for the first version

If an IMU unit (accelerometer + gyro) was added, this might be the only needed sensor. Homing could be done like this:

An IMU unit could be used during print the following way:

Since cheap 6-axis IMUs are really good at recording rotation, I expect the notion of "jerk" to include rotation (with expected rotation always 0). Timing will be really important, but Hangprinter-Marlin already has five nop operations in the middle of the stepping code (see the workhorse function in stepper.cpp), that could be utilized for IMU readings at precisely the right times. The nops are just there to wait for drv8825 stepper driver chips anyways.

Thanks to Dejay on forums.reprap.org for pointing out the possibility of a similar mechanism.