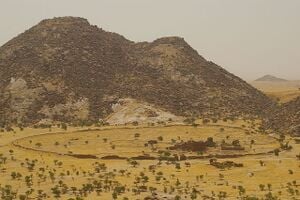 Chad ( (listen); Arabic: تشاد Tšād, Arabic pronunciation: [tʃaːd]; French: Tchad, pronounced [tʃa(d)]), officially known as the Republic of Chad, is a landlocked country at the crossroads of North and Central Africa. It is bordered by Libya to the north, Sudan to the east, the Central African Republic to the south, Cameroon to the south-west, Nigeria to the southwest (at Lake Chad), and Niger to the west. Chad has a population of 16 million, of which 1.6 million live in the capital and largest city N'Djamena.

Chad has several regions: a desert zone in the north, an arid Sahelian belt in the centre and a more fertile Sudanian Savanna zone in the south. Lake Chad, after which the country is named, is the second-largest wetland in Africa. Chad's official languages are Arabic and French. It is home to over 200 different ethnic and linguistic groups. Islam (51.8%) and Christianity (44.1%) are the main religions practiced in Chad.

Beginning in the 7th millennium BC, human populations moved into the Chadian basin in great numbers. By the end of the 1st millennium AD, a series of states and empires had risen and fallen in Chad's Sahelian strip, each focused on controlling the trans-Saharan trade routes that passed through the region. France conquered the territory by 1920 and incorporated it as part of French Equatorial Africa. In 1960, Chad obtained independence under the leadership of François Tombalbaye. Resentment towards his policies in the Muslim north culminated in the eruption of a long-lasting civil war in 1965. In 1979 the rebels conquered the capital and put an end to the South's hegemony. The rebel commanders then fought amongst themselves until Hissène Habré defeated his rivals. The Chadian–Libyan conflict erupted in 1978 by the Libyan invasion which stopped in 1987 with a French military intervention (Operation Épervier). Hissène Habré was overthrown in turn in 1990 by his general Idriss Déby. With French support, a modernization of the Chad National Army was initiated in 1991. From 2003, the Darfur crisis in Sudan spilt over the border and destabilised the nation. Already poor, the nation and people struggled to accommodate the hundreds of thousands of Sudanese refugees who live in and around camps in eastern Chad.

While many political parties participated in Chad's legislature, the National Assembly, power laid firmly in the hands of the Patriotic Salvation Movement during the presidency of Idriss Déby, whose rule was described as authoritarian. After President Déby was killed by FACT rebels in April 2021, the Transitional Military Council led by his son Mahamat Déby assumed control of the government and dissolved the Assembly. Chad remains plagued by political violence and recurrent attempted coups d'état. It is a least developed country, ranking among the lowest in the Human Development Index. Chad is one of the poorest and most corrupt countries in the world; most of its inhabitants live in poverty as subsistence herders and farmers. Since 2003 crude oil has become the country's primary source of export earnings, superseding the traditional cotton industry. Chad has a poor human rights record, with frequent abuses such as arbitrary imprisonment, extrajudicial killings, and limits on civil liberties by both security forces and armed militias.

Mahamat Zène Bada, the mayor of Chad's capital N'djamena, has noted that irregular rainfall patterns and deforestation in and around the city had led to major flooding in 1999, 2001 and 2008. The city is flanked by two rivers and most people rely on wood products for energy, which causes the deforestation.[1] February 27