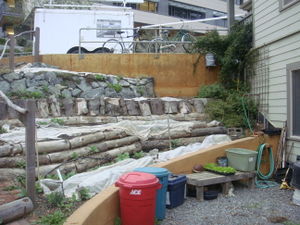 Figure 1: The CCAT garden beds and the existing gravity fed drip irrigation system. The storage bucket is scene in the background while the main water lines are visible on the back of the bottom terrace..[1]

This page was created for two reasons: 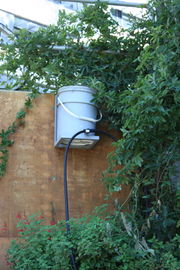 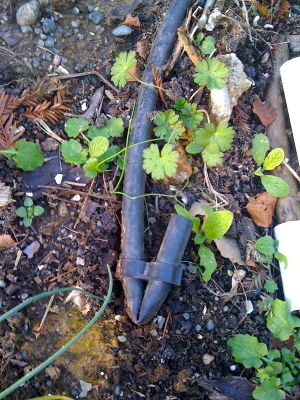 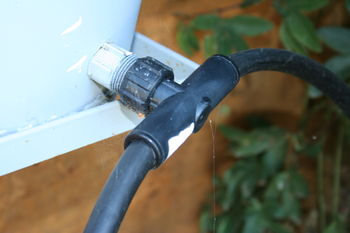 Figure 3: The T-fitting located at the storage bucket outlet splits the main water line to allow watering of multiple beds.[1] 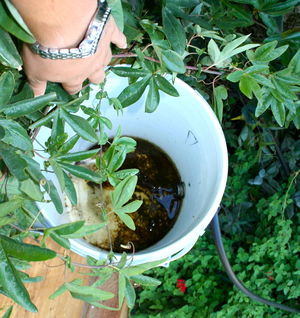 Figure 5: The existing storage bucket has debris and algae growth in standing water.[1]

The existing system is not working as the original design intended. The system has been all but abandoned (Figure 5). The main complaint voiced by the occupants of CCAT is that the existing system does not deliver water to the garden beds from many of the lateral drip lines (Figure 6). The CCAT residents have observed that the water flowing through the system is only emitting from the lateral lines near the terminal end of the main water line. 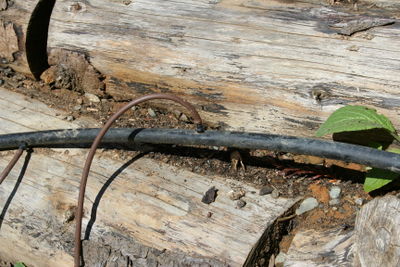 Figure 6: The lateral lines branch off the main water line and are designed to deliver water to individual plants.[1]

The current gravity fed drip irrigation system is not working as the original design intended. Some possible causes for the lack of performance associated with the current system are highlighted below:

The authors performed an assessment of the existing CCAT gravity fed drip irrigation system based on both an initial site visit and subsequent visits. The assessment includes several suggested system improvements. The proposed changes include:

Figure 7: Relocating the storage bucket to the top of the railing will result in an increase in the system head.[1]

Relocating the storage bucket to the top of the existing retaining wall would increase the system head by about one meter. The proposed new location for the bucket would also allow for easier access and maintenance of the system. Accessing the bucket at its current location requires users of the system to carefully walk amongst the garden plants resulting in a higher potential for crop damage by trampling as well as increased soil compaction.

The frictional losses in the system would be reduced by eliminating the excess length in the line.[4] The current system has an estimated ten meters of line coiled and laying in the garden bed area (Figure 8). The elimination of this coiled line would also increase the aesthetic value of the system. The system storage tank is not large enough to supply more than one main line at a time. Eliminating the T-filling and replacing it with a single line at the outlet of the storage bucket would increase volume of delivery per plant. The 90-degree bend fitting in the existing line has no apparent use and should also be eliminated from the system to reduce losses.

The current system is using emitters designed to be used with pressurized irrigation systems. The system would benefit by replacing the existing emitters with short path or "flag" emitters. The flag emitter is designed for use in systems with very low pressure such as gravity fed drip systems.

The installation of stabilizers on the main water line would reduce dips in the line (Figure 9). The current system has numerous dips in the main water line resulting in considerable head loss. The addition of the proposed hose stabilizers would also eliminate the need for the lateral water lines currently being used to direct the irrigation water to the plants. The hose stabilizers may be placed such that the emitters are located at the desired location to maximize water delivery to the plant.

The existing white storage bucket is allowing sunlight to penetrate into the stored water and facilitate algae growth. The algae present in the current system main lines and laterals may be resulting in reduced flow and system performance. Replacing the white storage bucket with a darker colored bucket will decrease the amount of sunlight passing into the stored water and reduce the growth of algae in the system (Figure 10).

The addition of a lid to the storage bucket will deter larger contaminants, such as leaves and debris, from entering the system. This will result in a more efficient and cleaner flowing system (Figure 10).

The existing 1/4" lateral drip lines are up to 1 foot in length. These lateral lines are increasing the head requirements of the system and adding to the decreased performance. Shortening the lateral lines and placing them on the under side of the main water lines will further reduce system losses.

The current system is lacking any sort of filter. The lack of a filtering component allows algae and particles to enter the main water line of the system resulting in decreased flow. The addition of a filter at the storage bucket outlet will reduce both fine and coarse particles from entering the main water line of the system. Reducing the concentration of particulate matter in the system will result in increased system performance (Figure 11). 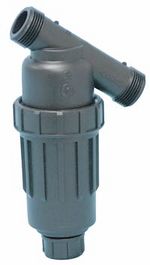 Figure 11: The proposed hose filter will reduce the amount of debris flowing into the main water lines.[10]

An itemized list of the costs associated with the proposed system improvements is included below (Table 1).

As of October 2014, the Gravity fed drip irrigation has been retrofitted with new t-fittings and irrigation lines. The old lines were corroded, leaky and clogged with debris. The system is operating fine now however, the irrigation system is no longer gravity fed, it is pressure fed from a garden hose hookup at the top of the trellised garden. A source who uses the irrigation system at CCAT says that the irrigation lines were connected to the rainwater catchment system but the hookup did not produce the gravitational force necessary to efficiently get water out of the lines. Another problem with the rainwater catchment system is it did not successfully remove all of the large debris from the water which would then get clogged in the irrigation lines. This blockage prevented some lines from producing water at all. With the garden hose hookup, the system gets more than enough water volume and pressure running through it to function correctly. The CCAT workers use the irrigation system once a week for 20min in the winter and 2-3 times a week for 20-30min in the summer months. The garden hoses were being used at the time I investigated the irrigation system so I could not try it out for myself. The source I spoke with assured me the lines were dripping water without a problem and the system has never been better since the introduction of the garden hose attachment.