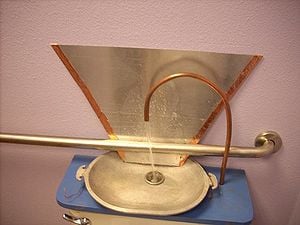 The Wash n' Flush is a Humboldt State University environmental science 410 senior project implemented by Jeffrey Steuben, Annie Welbes and Tim Dower which is located in the downstairs bathroom at CCAT. This is a toilet modification that allows users to save water by utilizing the wastewater from handwashing to flush the Toilet.

If you think of this project as a way of doing a DIY version of an Aqus Toilet, you'd be mostly right.

These are also commercially popular in Japan.

The goals of our project were:

We thought about the fact that clean, drinkable water is being used to flush human waste down the toilet. We consider this to be environmentally and socially irresponsible. Therefore, we took action. 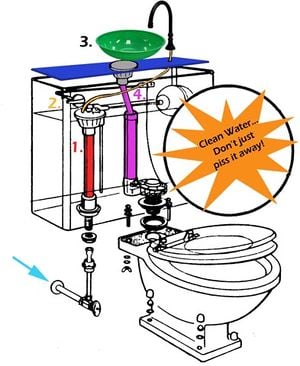 Painstakingly photoshopped diagram of the Wash n' Flush (1) Clean water flows in (2) Water is diverted towards the faucet (3) It flows out into the basin--Wash your hands! (4) Then drains through toilet's overflow tube to fill the bowl

The following materials and tools were used for this specific project. If replicating, you may not need the same equipment or materials. Feel free to get creative!

The Steps to Success![edit | edit source]

Yes, you do. Find an awesome step-by-step process to create this system at http://www.instructables.com/id/Hack-a-Toilet-for-free-water./

As of October 2013, the CCAT's water-saving-designed Wash n Flush is still fully operational. Here you can see it in proper working action!

According to a kind CCAT guide, the Wash n Flush provides "a lot" of water with which to wash hands! Indeed, the water from the Wash n Flush sink pipe flowed forth approximately another 20 seconds after the video ends--quite an ample amount. Though the fundamental functionality of the system has remained intact, time and usage has left its mark on the Wash n Flush. Below are the observable changes since its creation.

As of October 2014, the CCAT Wash n Flush toilet is still fully operational. The video below was taken on October 15th, 2014.

Although there are visible signs of wear and tear on the parts of the Wash n Flush toilet, the system is still functioning properly. According to an on-site source, the toilet gets used an upwards of 20 times a day, 7 days a week. Of the two people I interviewed at CCAT, neither of them reported any problems occurring with the system in the last 2 months since they had been present at the building. Not even a backup or broken flusher!

The Wash n Flush is a reliable water-saving system, but this model does require some basic upkeep. End of analysis.