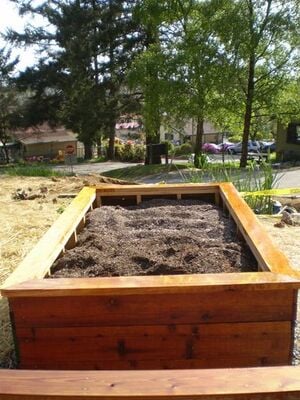 The (Campus Center for Appropriate Technology) CCAT recently changed houses, moving from the Jenkins House (which was temporary housing given to CCAT by Cal Poly Humboldt)to the Buck House. CCAT was forced to destroy the Jenkins house, thus leaving CCAT with a huge empty plot of land. CCAT has allocated this land for appropriate technologies to be constructed. Unfortunately, since the foundation of the Buck house was destroyed, the soil is not suitable for garden use, due to the high percentage of toxic chemical residue left over by the Buck house. This meant that to turn the space into a garden would be impossible, unless they found a sustainable way to build garden beds. The garden beds would serve as a solution since plants would be growing in controlled beds of soil, instead of soil with toxic in it. Also the site in which the house used to be on, has soil which contains to much clay to grow food in it. By building garden beds and growing within a controlled environment will make the plants grow healthier and also will prevent toxic chemicals from leaching their way into whatever will be grown in the beds.

The opportunity I have taken on for my project is building garden beds for CCAT. CCAT is interested in having garden beds built in their front lawn. This is because they want to use the land as efficiently as they can. The toxic soil presents itself with a little bit of a challenge, since my goal is to make sure that none of the toxins in the soil leak their way into whatever is growing in the beds.

Garden Beds are raised beds that provide a control environment for crops to grow. Raised Beds are rather simple to assemble, but if used efficiently can help maintain a weed-free garden all year round. Garden Beds, unlike conventional row gardening, can be less labor intensive, easier to maintain and can use garden space more effectively. They can also allow you to grow a diversity of different varieties of plants in a smaller space. For garden beds to be successful, special planting techniques must be understood, such as companion planting, crop rotation, succession planting and interplanting. Soil compaction occurs from walking in the garden, garden beds can be a solution to soil compaction and promote better drainage.[1]

When deciding where to build a garden bed, one of the most basic concerns is how much sun is the bed going to get and at what time of day will the bed receive the most sunlight. The best spot to put a garden is in a somewhere that receives at least 6 hours of sunlight a day, preferably 8. It is also important to consider nearby trees a concern when deciding the spot of your garden bed. Over time trees will grow, thus increasing the area they provide shade too. It is important to put your garden beds somewhere, where there are not a lot of trees to avoid this issue. Soil is also another main factor in the final quality and quantity of what you produce in your garden beds.[3]

There are three different types of garden beds. They include ground bed, raised beds and containers.

When building a garden bed, one of the most important things to take in to consideration is the size and dimension of the garden bed. Beds should be no wider than 4 ft. This is so the gardener can have easy accessibility to both sides of the bed when gardening. The beds should be no higher than 3 feet, so they are easy to garden in.

This is a rough version of the basic design we used for the frame of the beds. Once the bed's frame was built 1"x8" was used to side the frame.

1. The first thing we did was locate a spot in which would be appropriate to place the Garden Beds. CCAT had an idea of where they wanted them, so they flagged off 2 4x8 ft. plots for us to start construction.

2. We then used a garden hoe, to excavate the land and made it flat, so we could begin construction.

3. We laid down a layer of cardboard (which will desolve in the soil) to serve as a barrier between the soil in the beds and the ground soil. This will help prevent any weed seeds that were in the the ground soil from growing up into the soil we place in the beds.

5. After we assembled the frame, we began to side the exterior of the bed. This was done with garden grade redwood. We used screws to hold the pieces of redwood in place, this is so that if CCAT ever has to take apart the beds they can do so without destroying the wood.

6. The next step was placing a top on the beds. Since the garden grade redwood was really rough and CCAT wanted people to be able to use the beds as a place to sit, We purchased some nicer grade redwood for the top of the bed.

7. We then sanded down the edges, as a safety pre-caution.

8. Gravel was added to serve a drainage barrier between the soil in the beds and the top soil on the ground. This will help the beds drain quicker and hopefully prevent puddling from happening around the beds.

9. We then varnished the beds with a coat of Linseed oil, to prevent the wood from decaying. This protective layer will help prevent damage from the rain.

10. Potting Soil, that was donated from a friend were then added to the beds.

How "Appropriate" was this ENGR305 project[edit | edit source]

Originally we estimated the cost of the project to be over $1000.00, but because we shop around to local stores we were able the make a deal with Almquist Lumber in Arcata, who were very generous in donating free milling of Arcata Community Forest Redwood.

All the materials used were purchased locally. Local products were chosen whenever they were a viable option. The redwood used for the siding of the beds was redwood that was sustainable farmed out of the Arcata Community Forest after a huge storm that happened during December 2006.

Use of Recycled Materials[edit | edit source]

The soil that was placed inside the beds was reused from someones previous garden. We also salvaged a whole bunch of screws out of the yurt at CCAT. The cardboard used was salvaged.

Unfortunately time was not on our side in building these garden beds. Appropriate Materials proved hard to find and sometimes way beyond our price range. Also, building the beds took longer then we thought. Coordinating schedules was often times chaotic. Unfortunately we were not finished on time, but the project was still a success. Most of the criteria set for the project was met with the exception of time management.

A week before the creation of this appropedia page, the camera used to take the final pictures of the project was stolen and with it so were the pictures.

Special Thanks to Rowan Gratz for all his handy craftsman ship and to Almquist Lumber for their donations.

As of October of 2014, the two raised garden beds located in front of the Cal Poly Humboldt CCAT House are still in tact and thriving. The only change that has been made since the completion of this project has been the pivoting of the garden beds to make room for a palate and straw plaster wall segment to welcome people to the CCAT. The wood siding shows some signs of weathering, but the plants living in them seem to love it. There were a lot of veggies on the vine that looked close to harvesting. Currently, there are pickling cucumbers and tomatoes in the largest one and smaller herbs in the smaller, covered planters. This project really seems to have been a success as both beds are continuously fully in use year round by various CCAT and HSU students and volunteers. The most common and if only negative feedback and constructive suggestions made by volunteers and workers who take advantage and benefit for their use of the raised beds continously is simply the lack of more raised beds available for gardening activities due to the fact that the beds available are taken full advantage of and utilized to their max potential.