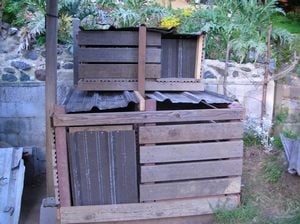 Compost is a mixture of decaying organic materials (plants) that is used for to fertilize and condition land. Compost can be anything from a pile of sticks and brush to food scrap bins using worms to digest organic materials (vermiculture). The main purpose of compost is to recycle food and garden wastes in to fertile soil.

As plants grow, huge amounts of organic materials are spread across landscapes in the form of leaves, needles, branches, and other leafy matter. These "dead" materials are broken down by an armada of bacteria, fungi, insects, birds and animals to produce topsoil. All of these "composters" recycle important plant nutrients by consuming plant material and excreting a more broken down form. This is natures fertilizer recycling nitrogen and other nutrients back in to the soil profile to be absorbed by next seasons growth. This process is very slow adding just inches of soil every thousand years.

How does this do anything for me?[edit | edit source]

Why does CCAT want a Composting system?[edit | edit source]

CCAT has had several composting bins throughout the years. All of the other systems had at least one of the following four problems: broken down due to age, was taken apart during the multi-year moving process, was not efficient, or was too accessible to rodents. I attempted to fix all of these problems by designing a more permanent system out of non-biodegradable materials. More on the design below...

There are many benefits that come from Composting:

This comprehensive composting system will be a system that decomposes kitchen and yard wastes. The compost bins should hold a large amount of material, be easy to maintain, aesthetically pleasing and be appropriate for the space and users. A three-tiered system will allow for multiple phases of compost to be "curing" simultaneously. Finished compost material will be used to amend CCATs present and future garden soils. Ideally, the system will be maintained year round. Compost can work year round especially in milder climates such as Coastal California.

There are many ways to build a compost pile. As long as each design fits the needs of the users, almost any design can be an efficient composting system. Below are a few of the shapes, sizes and purposes of different composting bins.

Creating healthy compost requires that you feed the organisms good food in healthy proportions. The little beasties that do our dirty work of chewing up the material like almost anything that is made of plant matter. Kitchen rinds, veggie leftovers, husks, even rotten plants are all delicacies. Maintaining the proper nutrient balance is also important for creating balanced compost. Adding grass clippings, kitchen wastes or manure supplies nitrogen and little carbon while sticks, hay, and leaves provide almost exclusively carbon. Avoid substances such as dairy products and meats. These wastes create odor problems and can attract flies and other rodents.

Composting microorganisms need a decent amount of water to survive. Desiccation (drying out) damages the microbial populations and the overall effectiveness of your compost pile. Saturating the pile decreases the amount of oxygen available to microbes causing the material to sit and rot as opposed to breaking down. Many materials that can be added to a compost pile contain moisture but often times it's not enough. Rainfall will affect this factor so monitor the soil around your pile for excessive moisture. Cover the pile with a tarp, lid etc. to prevent too much water from entering the compost pile. A good moisture content will not drip any water from a handful of compost just resting but will if you squeeze the material; like a sponge. But you don't want to add water to compost until the saturation point, the microbes will pull plenty of moisture out of the composting material. If you live in a dry climate, occasional waterings may be needed to prevent the piles from drying out too much.

I proposed several designs to CCAT that I felt would be appropriate. With a little guidance I determined that CCAT needed a large system able to process a lot of garden material that was easy to use. I have included all of the designs I drafted. Not all of the designs were meant for CCAT per se but are viable designs that have been used by many a gardener. The designs are presented in order from easiest and cheapest to build to most involved and costly. However the management time for each system varies as does the functioning purpose. For example, simple chicken wire bins are simple and cheap to construct but can be visually displeasing and cumbersome to turn the piles. On the other hand, a three tiered vertical system takes a lot of time and money to construct but the management process takes a fraction of the time.

When reexamining my criteria of easy upkeep, esthetically pleasing, durable design, security, and capacity variablity I found this project to be a success. One of the major goals of this project was to make composting easy for CCAT. Turning compost can be a significant sink of time unless the design makes the process easier. Tiering the design almost on top of each successive cell minimized the square footage of the bins while maintaining ease of turning. The aesthetics of the project, while not exactly as I imagined, are up to par for the time frame.

Another key aspect of final design was the material. Trex, a recycled plastic-wood composite can withstand high temperatures and continuous moisture, an ideal combination for compost bins. Trex is commonly available throughout the United States. Rodents have been an issue of major consideration for CCAT and many another gardener. Mice and rats are especially adept at finding homes inside compost piles or bins. The three tiered design makes many sides inaccessible to rodents but makes other areas more accessible. For example, the areas around the roofs and doors for the bins need to be adjusted in order to increase security.

Variability in compost capacity was one idea that became a design criteria. During the summer months, CCAT has a much lower organic material output as school is not in session. The bins need to be able to accommodate the output at the peak of use (during the school year) while maintaining an appropriate paced decomposition process at minimum inputs (during the summer).

Overall, the whole process was a success. This project was created almost entirely with recycled materials from CCAT. The three bin system is sturdy enough to have someone standing on any of the three levels. Unfortunately, the compost system is so large that it will take about six months before efficiency testing can be done. Repairs should be very easy as almost all sides of the bins are exposed to air.