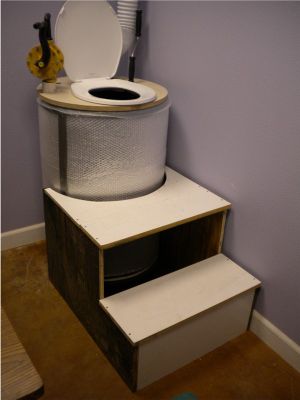 The composting toilet at the Campus Center For Appropriate Technology (CCAT) was designed by students in Humboldt State's engr215 class. The purpose of project CCATBox was to design a composting toilet system to be used at CCAT in order to save water and recycle the nutrients that were being flushed away. This page will detail the design and use of the CCATBox.

The CCAT house, located on the Cal Poly Humboldt campus in Arcata, CA, is an example for sustainable living and strives to educate the public about appropriate technologies. A composting toilet is an appropriate technology because a composting toilet will recycle human fecal matter, changing a waste into a resource. Humboldt State's engr215 class was given several ideas for things needed at the CCAT house. These ideas were open ended and the solution was left to the students. A composting toilet was one project, other projects include:Public Health Bike Blender, CCAT Kitchen effluent particulate filter, greywater grease trap, something for kids, CCAT cob protection and beautification, and a cloths dryer.

The system consists of three barrels that are cycled between receiving raw waste and composting. As one barrel is being filled the other two barrels are composting to breaking down the organic matter. After a barrel has been composting for a year, the compost will be used to fertilize trees near the CCAT house.

The design of the waste barrels was based on a design from the Sun Frost company, located in Arcata CA.

The waste barrels are 55 gal. steel drums. Each barrel will be lined on the inside with a drum liner, made of thick durable plastic sheeting, formed specifically to fit inside the barrels used. The liners protect the steel from corrosion and make cleaning easier. Fixed to the outside of each barrel is an insulation jacket. This insulation keeps heat generated by microrganisms in the compost mass inside the barrel. Each of the three barrels sits on a round wooden base which has five evenly spaced steel castors to for movement. Located in the bottom of each barrel is a steel barbeque grate with a steel mesh. The grate and mesh together prevent solid waste from reaching the bottom of the barrel and create a cavity at the bottom for fluid to drain to. This cavity also allows air flow to the bottom of the compost. The grate is held 2.5 inches above the floor of the barrel by four pieces of three inch diameter PVC pipe. In each barrel there is a two inch PVC pipe that extends from the lid to the barrel floor. Each pipe is held in place by a hole in the grate and a hole in the lid that the pipe fits through. The function of this pipe is to allow the hand crank pump to reach the fluid at the bottom of the barrel without contacting the solid waste. Also in each barrel is a steel hand mixer with corkscrew tip used to mix and aerate the compost mass.

In order to exhaust odors to the outside and allow for evaporation a venting system is necessary. The venting system has a main vent located in the bathroom ceiling that goes through the roof to the outside. Connecting the three waste barrels to the main vent is vinyl hose, the type used for drying machines. These hoses can be easily removed from the barrel lid for easy movement of the barrels. Attached to each lid is an AC fan. The fan blows the dirty air from the barrel through the vinyl hose and out the main vent.

How The System Works[edit | edit source]

The process works by having the individual barrels cycle through three stages in which raw waste is added, composted, and then used as fertilizer for trees.

Stage One is "The Throne," shown in figure # and is where the CCAT residents will be going to the bath room. There is a lid with a toilet seat, stir rod, vent fan and hose, and urine pump. There is a step stool box to easily get on top of the barrel. A vinyl hose will connect the lid to the main vent that goes out through the roof. With only the three CCAT residents using the toilet, the barrel will be ¾ full in an estimated three to four months. Once the barrel is ¾ full, the barrel will be cycled to stage two.

At stage two, no new waste will be added to allow the fecal matter to decompose. There is a lid which has a hole for the stir rod, pump sleeve, and ventilation hose. Lid is connected to the ventilation system. There is also a thermometer to keep track of how hot the compost pile is to insure proper composting. After four months and another barrel is ¾ full, the stage two barrel will be cycled to stage three and the stage one barrel cycle to stage two.

Stage three is the last stage and is for continued composting to insure that pathogens are destroyed and the compost is ready to be used as a fertilizer for trees. After another four months and the stage one barrel is ¾ full again, the stage three barrel will be taken outside, the compost dumped out and spread around the trees near the CCAT house. The barrel liner, stir rod, grate, and pump sleeve will be cleaned and the barrel will start the process over again at stage one.

To prep a barrel for use, make sure the barrel has all needed components. The barrel should have: plastic inner liner, steel grate with wire mesh, pump sleeve inserted through grate, stir rod, insulation jacket, and the barrel should be on a rolling cart. A 6 inch layer of dry wood shavings should be placed in the barrel covering the grate before use. (Note: Do note use redwood as redwood will prevent proper composting) Put on the barrel lid, step stool box, and attach the venting hose.

The system should be used primarily for solid waste and only urinated in while going poop. Toilet paper can be put into the system but nothing that is not compostable. After each use, the solid waste should be covered with wood chips. The fan for stage one can be turned off by the switch on the cord (if the fan is distracting) but should be left with the toilet seat closed when no one is using the toilet. Stop using the composting toilet once barrel is ¾ full. Wash hands when done.

Once a week, stage one should be pumped using the hand crank to get as much fluid from the bottom to the top as possible and then mixed up using the cork screw stir rod. The compost should be thoroughly mixed to the bottom to allow aeration throughout the compost. Be careful not to damage the barrel liner or the bottom grate. Stir rods should be left in the barrel, even when switching stages. The first couple of weeks after a barrel switches to stage two, the fluid level at the bottom should be checked and pumped if necessary. If pumping is necessary, remove the pump from stage one and insert pump into the stage two pump sleeve. Put pump drain into the hole and pump fluids then return to pump to stage one. Stage two and three should also be stirred once a month.

After a barrel has cycled through stage three, the barrel should be taken outside and the compost dumped out. The compost should be used to fertilize trees or non edible plants. The barrel liner, grate, stir rod, and pump sleeve should be cleaned off with water. After handling the compost, wash your hands. Check the condition of the grate screens and other barrel components, replace or repair as needed. Afterwards, return barrel to stage one to start the process over again.

This is an experimental composting toilet. If you have information on how the system is working, or suggestions, please update this site and let us know how things are going.