As populations grow worldwide and natural resources diminish it has become important for people to consider and implement more sustainable means of living. A composting toilet is an easy solution to this growing need. A composting toilet turns human waste into usable compost. It requires little to no water, excludes the need for elaborate sewage treatment systems. The system is sanitary and safe when implemented properly. As a team, The Composting Loo's,: Ian McBride, Megan Gerdes, Jessica Jewett, and Ramin Moazzami designed Duchamp de Loo. Duchamp de Loo is a prototype composting toilet system, for WaterPod, that can be easily duplicated by individuals interested in installing a sustainable toileting system. For complete details of the project and viable alternative designs see our full project document.Duchamp de Loo 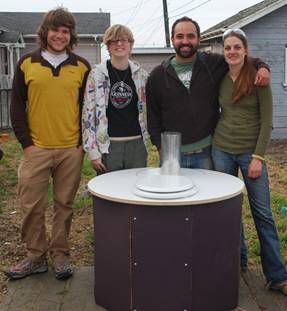 WaterPod is a floating art/sustainable living exhibition on a barge. As part of the Spring 2009 Engr215 Introduction to Design class at HSU, students worked to make sustainable projects for the crew aboard WaterPod to use and educate the public, during their six month voyage around New York waterways.

Duchamp de Loo, is a composting toilet system that can be used and can educate people about environmental ways to get rid of human waste. The many features of the design include: the toilet seat, a urine catcher along with urine storage, the human manure bin, an additives bucket, a stirring stick, a ventilation system and access doors to allow you to retrieve your compost.

The WaterPod project will be traveling on a barge throughout the New York waterways. They will be educating the public about many different ways you can help the environment that would be affordable and be easy to maintain. The team came up with an environmentally friendly way to get rid of or use the WaterPod group member’s excreta.

Below is a table of criteria, which was taken into consideration for the design of Duchamp de Loo, it is in order of weighed importance.

The design is constructed to be as simple as possible but still be effective. Multiple different processes are involved when using the toilet system. There is the urine catchment system, the fecal matter catchment, the ventilation system and the composting system. Below is a picture of Duchamp de Loo. 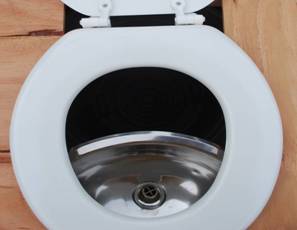 The urine catchment bowl is located towards the front of the seat to collect urine. Urine directed into the bowl where it flows down the piping. From there the urine passes through an oil barrier. The oil barrier works as a sealant keeping the smell of the urine trapped below the oil due to it being less dense than urine. The urine then travels into a urine storage tank. From there it can be diluted with water ratio of 10:1 and can be used as fertilizer for plants. Below is a picture of the toilet seat open in order to be able to see the urine catcher.See figure 2. 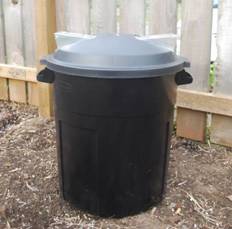 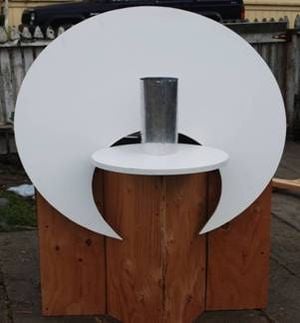 Fig 4: The back of Duchamp de Loo with lid open and ventilation pipe. 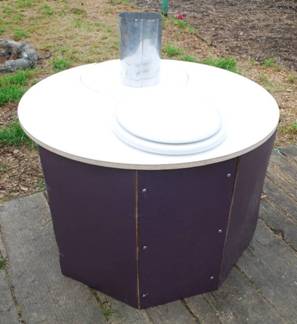 The ventilation system is a simple vent connecting to the storage area located under the toilet seat. The vent will start at the top of the toilet platform and will go straight up to the roof. At the top of the vent (located above the roof level) there will be a rotating cowl to provide moving air flow. At the bottom of the vent the client will have an option of installing a solar fan to further prevent smell if rotating cowl doesn’t provide enough ventilation power. Figures 4 and 5 show the placement of the ventilation system.

This table shows what materials we used to build Duchamp de Loo.

The design we created was meant to be altered to the needs of the builder. The materials used should consist of what is most available. Most materials on this list can be substituted for other things. The best choice of materials is recycled and reusable things to help the output cost of building this structure.

To construction of the frame is the bulk of time spent. The shape and dimensions of the structure can be change to fit your needs. The drainage system can also be changed to fit your design. The piping is constructed quickly, by connecting joints and pvc piping. After those two things are built the rest is just placing components into their necessary places. This system was designed to change to the needs of the builder, this allows the design to less problems when implementing it at home.

Duchamp de Loo is a prototype toileting system. The frame design, which consists of panels that bolt together and also includes access through a side door and lid, is an innovative design based on; WaterPod's requests for a circular toilet; a desire for easy access for cleaning; and the project design need for shippablity. For a home version this frame could easily be modified to a standard four sided box for easier construction.

Also much of the design is based on the fact that the toilet will be used on a barge as opposed to a house or farm. This added to issues in the storage of the compost (during toileting and after the excreta is removed). In a home situation excreta can be diverted farther away from the toileting area, for example to a basement. On a farm or were earth is present the storage of excreta can be recessed into the ground and therefore diverted farther away from the toilette. Also when the humanure is removed from the toilet for storage during the composting process being on a barge changed the equation. Under more normal conditions when the humanure can be stored outside on soil, aeration holes can be drilled in the bottom of the storage container without so much concern for excess moistener leaking out, because it could drain directly into the ground (rather than onto the deck of the WaterPod barge).

Our design is best suited for a situation with limited vertical space and an absence or low availability of space containing soil. The next steps for the design would be modifications that could be implemented given other living conditions.

Also the urine separation system could be upgraded to a toilet set that replaces the need for the sink underneath. These urine separating toilet sets are in production and available online. The removal of the sink from inside the box would free up space underneath the toilet and would refine the design.