The research project was a collaboration between Cal Poly Humboldt's Engr308 Technology and the Environment and Zero Waste Humboldt (ZWH) during the Fall of 2019. The client liaison on this project is

The objective of this project is to analyze and compare the impacts of recycling beer bottles to local beer bottle washing in the terms of embedded carbon dioxide emissions and embedded energy. While researching, we were able to conduct a comparative examination between the life cycle analysis' for both recycled bottles and washed bottles. The glass beer bottles we used for observation were from Lost Coast Brewery in Humboldt County. 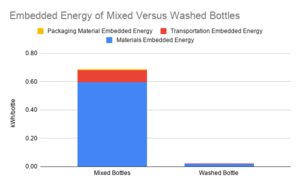 Embedded energy of the production of a single mixed bottle versus a single washed bottle. Source as produced by File:Bottle Washing Analysis.xlsx. 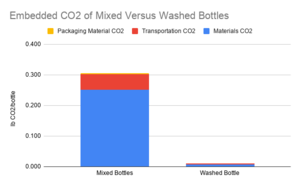 Embedded CO2 of the production of a single mixed bottle versus a single washed bottle. Source as produced by File:Bottle Washing Analysis.xlsx.

The assumptions used to obtain these results can be seen below in further detail in the section titled Caveats.

Based on the numbers shown above, we are able to conduct a comparative analysis showing the embedded energy and CO2 between a single mixed bottle and a single washed bottle. The calculations and assumptions used to aquire these results can be seen in further detail in the following spreadsheet:

The spreadsheet allows for others interested in performing a similar analysis to easily input values pertaining to their particular study area. It is our hope that with this information and the pre-assembled spreadsheet, other institutions will be able to reach similar compelling conclusions that have the potential to influence future policies. 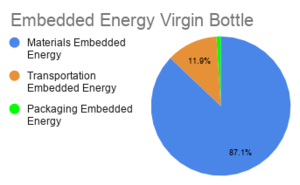 Embedded energy in the production of a virgin beer bottle by source as produced by File:Bottle Washing Analysis.xlsx. 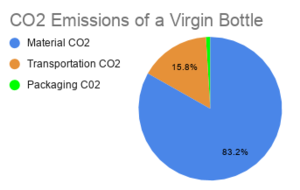 Carbon Dioxide emissions from the production of a virgin beer bottle by source as produced by File:Bottle Washing Analysis.xlsx.

The bottles analyzed in this study were 12oz glass bottles, produced by a company in Los Angeles, California and then transported to Lost Coast Brewery in Eureka, California. We measured embedded energy of a virgin bottle by accounting for materials, transportation, and packaging. A virgin bottle is defined as a bottle that has completely new materials. Therefore, the life cycle analysis was determined through the manufacturing processes necessary for the creation of a new glass bottle. The embedded carbon dioxide comes from the melting of materials, heating water, and other CO2 emitted during transportation. The embedded energy for a virgin bottle is 0.72 kWh/bottle and releases 0.323 pounds of CO2 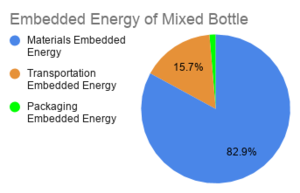 Embedded energy in the production of a mixed beer bottle by source as produced by File:Bottle Washing Analysis.xlsx. 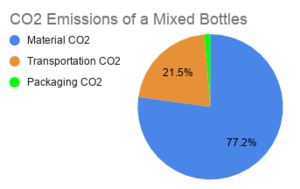 Carbon Dioxide emissions from the production of a mixed beer bottle by source as produced by File:Bottle Washing Analysis.xlsx.

The recycled bottles analyzed in this study were the 12oz glass bottles from Lost Coast Brewery in Eureka, California. These bottles were produced by the company Saxco based out of Sacramento, California and were transported to Lost Coast Brewery in Eureka, California. It was estimated that 20% of all the bottles purchased were recycled. This is a user input that we assumed based on dialog with Lost Coast Brewery and is changeable on the spreadsheet. As recycled materials are made into bottles again, the melting process was found to be similar to creating a virgin bottle. It takes a similar process and emits a little under that of a virgin bottle. Further, the transportation was less in a recycled bottle because of the difference in distance. The embedded energy a mixed bottle was 0.69 kWh/bottle and released 0.306 pounds of carbon dioxide emissions. 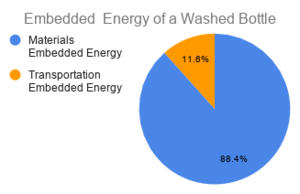 Embedded energy in washed bottles (including making the bottle and washing it 35 times) by source (note that materials include the washing process) as produced by File:Bottle Washing Analysis.xlsx. 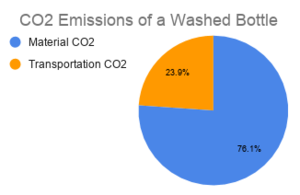 Carbon Dioxide emissions from washed bottles (including making the bottle and washing it 35 times) by source (note that materials include the washing process) as produced by File:Bottle Washing Analysis.xlsx.

We predicted that the bottles being washed were 20% recycled bottles to begin with (although the bottle might need to be thicker for washing, which would raise the embedded energy and CO2 somewhat). It was assumed that transportation would not emit extra energy for a washed bottles because consumers could drop off their bottles during a regular shopping trip. Embedded energy and CO2 came from each time a new or recycled bottle was made, along with the process of running the bottle washing machine. The amount of times a bottle can be re-washed ranges from 25 to 50 times and is a number a user can input - we used 35 for the following findings. The embedded energy in a washed bottle is 0.021 kWh/bottle and releases 0.010 carbon dioxide emissions.

During the Fall of 2019, Cal Poly Humboldt chose to support the Zero Waste Humboldt, specializing in providing waste reduction solutions through public education, advocacy, and technical assistance and training,[1] to end the use of transporting beer bottles to be recycled and to promote local bottle washing. This project hopes to influence Lost Coast Brewery's possibility of investing in a bottle washing machine. Students in ENRG 308, kept in contact with Scot, the manager of Lost Coast brewery, to determine factors such as bottle sold, materials, and where shipments go etc. By analyzing the materials used, transportation, and the packaging, we were able to determine embedded energy and carbon dioxide emissions within a virgin, recycled, and washed beer bottle. This type of bottle washing is a common practice in many European countries and our findings show why. The energy used to wash a bottle is far less than a mixed bottle consisting of virgin and recycling materials. This literature review will go over the embedded energy and CO2 emissions of the individual products, the energy, and carbon impact of transporting the products, as well as creating a total energy and carbon dioxide impact of the product once the virgin bottle is bought.

Embodied or embedded energy (EE) is defined as the energy used during the entire life cycle of a product. For example, the EE of a virgin bottle or mixed bottle could include extraction and processing of raw materials, manufacturing, transportation, distribution, use, reuse, recycling. Assuming that in all cased disposal is needed, this was kept out. The process of returning a used bottle to Lost Coast Brewery is assumed that it takes no extra transportation. This was a portion of EE calculations for the three bottle types. And if a bottle washing machine was purchased by Lost Coast Brewery, people who drop off bottles would be coming for more than just a drop-off. EE calculations are used to conduct life cycle assessments (LCA). LCA is a well-explored concept and has been used as an environmental management tool since the late 1960's.[2] LCA provides a tool for evaluating the relative environmental impact of various materials and calculates externalities otherwise excluded from pricing. Our LCA will include emissions and the EE of the materials and shipping.[3]

For Trucks the Fuel efficiency of Class 8 Truck by Vehicle Weight Range on Flat Terrain at 65 mph 9.2 miles/gal[4] which we then convert into km which is 14.8 km/gal.

It was found that Humboldt County transfers their beer bottles to Sacramento California and/or Los Angeles, California.[11]

The efficiency for a variety of trash trucks was averaged at 3 miles per gallon which was then converted to km instead of miles[12] which ended being 4.8 km/gal.

On one truck they can transport up to 20 pallets with holding 4,290 bottles per pallet

After completing the initial analysis, there are various alterations to the methods that could be made to create even more accurate results. These include:

Page data
Retrieved from "https://www.appropedia.org/w/index.php?title=Bottle_washing_analysis&oldid=647904"
Cookies help us deliver our services. By using our services, you agree to our use of cookies.
Categories:
Maintenance categories:
About Appropedia · Policies · Contact · Content is available under CC-BY-SA-4.0 unless otherwise noted.