The Black Mamba bicycle is commonly found in Africa. The overall goal of this project is to make open source models of as many bicycle parts as possible. This will hopefully allow someone to set up and print many of the parts of the bike at a lower cost then it would typically be. This page is the design of the black mamba bicycle pedal. 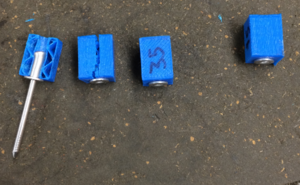 In order to ensure the fill of the pedal could easily support the pop rivets, cubes of different fill were tried with the rivets. The figure to the right shows the rivets after a load was placed on the rivet trying to move it in and out. This was to simulate the load that would be placed on the pedal while the bicyclist was pedaling. This shows that between the 35-45% no cracks had occurred.

The next test that was tried was printing the pedal in just 2 pieces. This would have one end and two grips joined together. This would reduce the need of rivets to 2. After i applied a load the end-piece broke, I believed this was due to the direction the layers were going as it broke parallel to the boundaries. In order to change the angle of the layers, and to allow for simple prints, the 4 piece model was chosen.