From Appropedia
HOME MADE YEAST MAKING AND USING YEAST FOR BREAD

Generally when one mentions yeast, aromatic loaves of fresh homemade light bread come to mind. And so they should. Aside from acting as a leavening agent in bakery products, yeast is also the ingredient responsible for the tantalizing aroma that arises during baking.

Though probably today the most commonly known and used are store-boughten packages of dried yeast, there are several other different kinds. The recipes that follow show two examples of different ways to make yeast--dry yeast cakes made from hops and an everlasting yeast "starter"--and also how the yeasts are used in making bread.

The dry yeast cakes are made in part by boiling the blossoms of the hop vine. These flowers contain a fragrant yellowish oil called lupulin. The use of this oil as a preservative in beer and as a narcotic drug originated in Germany before Charlemagne. Since then its use has become wide spread and the vine cultivated in other nations, including America.

The hop vine is related to the hemp and mulberry plants in the nettle family. The plant itself is twenty-five to thirty feet in length with rough lobed leaves and flowers that grow on catkin clusters. It is quite possible that many people in the Ozarks have never seen a hop vine, because although some Ozarkians have had limited success cultivating it, it grows best in sandy coastal regions.

Recipes for making yeast from hops have been passed down from mother to daughter for generations. Many women stopped making yeast in the late 1800's when it became readily available in stores, and consequently stopped teaching the art to their children. None of the staff's mothers knew how but not everyone's families have adopted the use of the commercialized product. Ella Dunn, one of the few who has kept alive the tradition of making yeast, told us one way to make it and Mary Scott Hair was kind enough to send us some hops. With written instructions from Ella and our fingers crossed we chanced making the yeast cakes on our own. We had a few let downs and difficulties but we at least ended UP with a product that made bread, so apparently we did something right. 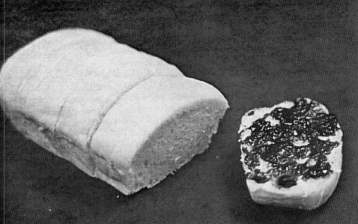 Boil 3 or 4 peeled potatoes in unsalted water. When done, drain the potatoes and mash them well, but save the potato water to use later. Cover the hop blossoms with water and bring to a boil. Drain off the water and save it, too. (Ella's mother dissolved a dried yeast cake left from her last batch into this water as a booster.)

Put flour in a pan and slowly stir in the potato water you saved. Be careful not to use too much water. Mix slowly so that the flour won't be lumpy. If the mixture is too liquidy it might be necessary to cook it until it is a thick paste-like dough.

Add mashed potatoes and sugar. Mix well and then slowly add the hop water until you have a medium soft dough. Let rise double. Then punch down and work in enough corn meal to make a stiff dough. Roll out the dough on a board to about 1/2 inch thick and cut into cakes. Let the cakes dry, turning them often to make sure they dry evenly. When you think they are good and dry, hang them up in a muslin bag for a few days to make sure they won't mold. After this you can store them in fruit jars or however you wish.

We followed this recipe using the called for amounts of ingredients and found it made two large pans of yeast cakes. Whereas this amount would be fine in a large family where bread is made often, it was much more than we needed. You may want to cut it down some, especially the first time you make it. 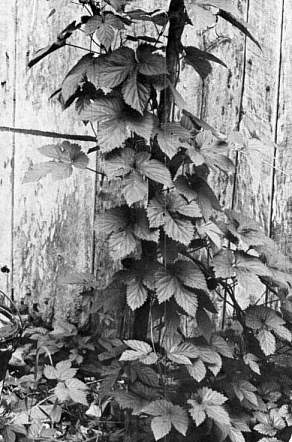 The hop vine (above) originated in Germany and was popular with Pepin the Short, father of Charlemagne. The cone-shaped female blossoms contain a yellowish oil, lupulin, which is useful as a narcotic drug, as preservative in beer and in making yeast cakes.(by Doug Sharp) 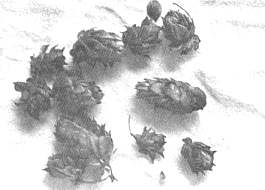 Of course, yeast isn't much use unless you bake with it. This is Ella's mother's recipe for making bread from the dried yeast cakes:

Crumble the cakes into the water, add one tablespoon sugar and put in enough flour to make a soft sponge. Beat the mixture until it is very smooth. Let this rise over night. The next morning add butter, salt and remaining sugar and work in enough flour to make a smooth dough that doesn't stick to the hands. Knead well. (Ella's mother made her work the dough for an hour.) After kneading leave dough in a warm place and let it rise double.

Grease the bottoms and sides of the baking pans. pinch off dough for the loaves. Air pockets make bubbles in the bread when it is baking so try to knead the loaves Well. My own mother uses packaged yeast when she makes bread, but even so she always names each one of the loaves after my brother, sisters and myself and then "spanks" us as an extra precaution to get rid of air pockets. 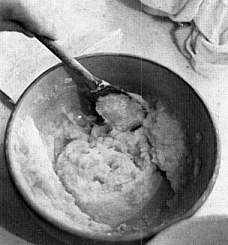 Metal reacts with the acid in both the yeast and bread dough to spoil the flavor. For this reason use wooden utensils and some type of non-metalic bowl.

Another way is to twist the loaves. After forming the loaves, lay them in the greased pan and turn them over to oil the tops of the loaves, too. Then let them rise double again, and bake at 350°F for about an hour Or until the top is golden brown.

Ella said, "The German way to tell when a loaf is done is to touch your nose to the top of the loaf. If it doesn't burn your nose, it is done.!'

The second type of yeast everlasting yeast starter--is a living yeast that must be kept alive by regular feedings or use. It also must be stored in a cool place. This is one of the oldest known yeasts, dating back to 4000 B.C., and is actually more widely used than the dried yeast Cakes in spite of the added difficulty of preserving it. Often women found it necessary to make bread as many times as twice a week to keep the starter alive. But even if the starter did die there were many ways Of making a new one. The following recipes were shared with us by Mary Scott Hair, or better known to many as Samanthy.

Boil potato in the unsalted water until done. Drain, but save the water. Mash potato then add sugar and salt. Cool to lukewarm, add enough potato water to make one quart of mixture. Cover and set in a warm place and let ferment. If you like, you can add a package of "boughten" yeast to speed up the process, but it will be just as good if allowed to ferment without the yeast. This recipe is about right for a large family requiring more than one loaf at a baking.

one potato (about the size of a large hen egg)
3/4 cup potato water
2 Tbsp. sugar flour

Boil potato, drain and save potato water (unsalted). Mash potato well, and then add potato water, sugar and enough flour to make a fairly stiff batter or soft dough. Keep in a warm place until well fermented. Then put in a wide mouth jar and cover loosely--never use a tight fitting lid. In about five or six days it should be ready.Old-fashioned Light Bread from Everlasting Yeast StarterIn order to make bread from the starter first set the sponge. To do this, use the following ingredients:

Get a large bowl and put the starter, potato water or sweet milk (heated to a little more than lukewarm), sugar and enough flour to make a stiff batter. Beat well, cover loosely and set over night in a warm place. The next morning the mixture should be nice and bubbly. If it isn't, no use going any further. You'll have a flop!

If the sponge is bubbly, take out of this mixture the starter you want to keep for the next time you make bread. Put it in a wide mouth jar and Put in refrigerator. You'll probably want a lid on it because the odor will transfer to other foods but don't put it on too tightly. 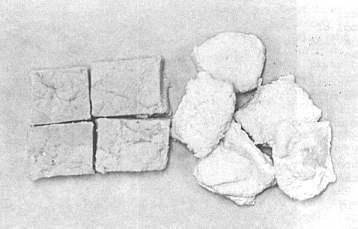 The recipe for making yeas cakes from hops calls for cornmeal to stiffen the dough. White cornmeal was added to the cakes on the right and yellow cornmeal to the ones on the left. Although their appearance is quite different, their use and results in bread making are the same. Now you are ready to make the bread dough using the sponge and the following ingredients:

To what remains in your bowl after taking out your starter, add unsalted potato water or milk, salt, sugar and melted shortening. Add enough flour to make dough that will handle well. Beat until the batter can't be beaten, then turn out on a well floured board and knead until it is soft and smooth. Put in well greased bowl, cover with some type of cloth and let set in a warm place until the dough has doubled in bulk. Punch the dough down and pinch off your loaves. Shape and put into pans. Let your loaves rise double or until they almost reach the rims of the pans. Bake in moderate (350°) oven for about 45 minutes. When done turn the loaves out of the pans at once and grease sides with butter or shortening. This recipe will make two small loaves or one medium size loaf and a pan of rolls.

We discovered that both of these yeasts are much slower working than commercial yeast. If you are used to using the store-boughten product, be sure to allow enough time for the dough to rise.