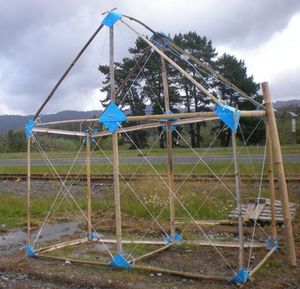 The Rock Root J.A.S. (Figure 1) design project was constructed for the World Shelters Foundation from the Spring 2010 "Intro to Design" class at Cal Poly Humboldt. Team HERE ON EARTH has proposed to use concrete rubble as an anchor to hold fast the original shelter design. The Rock Roots design is being proposed to World Shelters to be used as a shelter for refugees, particular in Haiti.

On Tuesday, 12 January 2010 a magnitude 7.0 earthquake hit Haiti approximately 25 km west of the capital with catastrophic results.[1] The Haitian Government reported that an estimated 230,000 people had died, 300,000 had been injured and 1,000,000 had been left homeless.[1] World Shelters has taken a steps to aid the citizens of Haiti.Their goal is to implement a new structure that was easy to install and withstand a class 1 hurricane, thus the Just Add Sticks (J.A.S.) structure was designed.

The J.A.S. structure was developed by World Shelters as a low cost and compact shelter kit. It is a transitional design to provide permanent housing for its users. The kit provides 192 sq. ft. of shelter. The J.A.S. structure was an inexpensive design and utilized the surrounding resources, however, it was not hurricane resistant. Team HERE ON EARTH consists of Wesley Nickerman, David Wittmers, Chetco Jamgochian, and Jamie Larrabee.

HERE ON EARTH's mission was to retrofit the current design of the J.A.S. (Just Add Sticks) structure to make it capable of withstanding a Class One[2] hurricane. This retrofit was to be low cost, use a minimal amount of materials, and be easily implemented into the current design.

The criteria listed below are the guide lines specified by the client, World Shelters. The Rock Roots J.A.S. structure is designed according to the criteria.

The final solution used a combination of anchors (Figure 2) and a drainage system (Figure 3). To protect against flooding, a series of French drains filled with crushed rubble to redirect water, was implemented. To protect against wind, a series of buried anchors are installed to the structure's corner joints. The French drains channel the water into the drywells; drywells allow the water to drain below the topsoil. Two anchors are attached by nylon cord to each joint and buried into the French drains. These anchors sufficiently hold the structure to the ground *see testing results.

Team Here on Earth tested the J.A.S. based on water and wind. The water testing was primarily brought to us by nature which dumped 2.3' of water into the french drains.[3] This water was efficiently redirected into the 3.5ft drywells. To imitate wind a 3:1 pulley system attached to a weight scale was used to apply a load in 50lb increments until the bamboo bent at 225lb pressure per node. The Rock Root J.A.S. design implements sufficiently held the structure in-place. However, the cut bamboo did not hold up to the stress created by the pulley system.

The bamboo failed in testing the J.A.S. design. The anchors held the base in place and the french drains redirected water to prevent flooding. When building the J.A.S. team Here on Earth used quarter pieces (~3' diameter) for the skeleton of the structure. The testing has proven the quarter piece bamboo too weak.

Team Here on Earth recommends using half or full, non-split bamboo, as well as, conducting further testing of the structure and components including any changes to the J.A.S. design.