From Appropedia
Redirected from WorldShelters Rubble to Resource 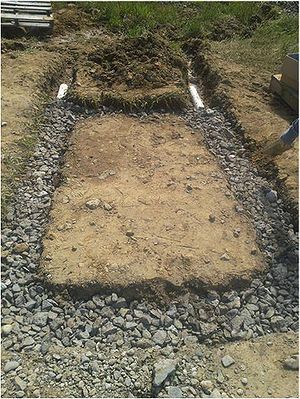 The goal of the Engineering 215 Spring Semester of 2010 Rubble to Resource project was to find a use for the rubble created by the January earthquake in Haiti. The Rubble Trench Foundation is designed to utilize this rubble and to employ as many Haitians as possible in the process of constructing rubble trenches.

On Tuesday, 12 January 2010 a magnitude 7.0 earthquake hit Haiti.[1] This earthquake caused massive damage in 3 major cities and the countryside surrounding the epicenter.[2] The Haitian Government reported that an estimated 115,000 people had died, 200,000 had been injured and many more have been left homeless.[2]

World Shelters worked with the Engr215 Introduction to Design class at Cal Poly Humboldt to create solutions to improve areas in disaster. Team Rubblution was assigned the task of creating a solution that utilized rubble to rebuild Haiti. Team Rubbultion designed a rubble trench foundation to use rubble created in Haiti's 2010 earthquake to support relief structures.

After the 7.0 earthquake in Haiti during January of 2010, many buildings were reduced to rubble, which is now inhibiting the construction of new buildings. With no place for this rubble to go, World Shelters has asked the Rubble to Resource project to find a solution, so that the rubble in Haiti could be used as part of the reconstruction of Haiti. 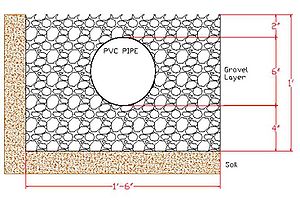 The Ruble Trench foundation system uses recycled concrete rubble left over from buildings that were destroyed in Haiti during the 7.0 earthquake mid-January 2010. Figure 1 shows the complete foundation.

The Rubble Trench Foundation System can be used to support various new building structures in Haiti built by World Shelters and other organizations, and could be used in other locations.

This design provides more support against hurricanes and earthquakes than previous foundation systems used in Haiti. The Rubble Trench Foundation System provides work to unskilled laborers in Haiti and other locations where World Shelters works.

Throughout the length of the project we have recorded the time we have spent on each phase of our process, as seen in Figure 3. In total we have spent 143 hours on our project. A majority of our time went into our Literature Review, in which we researched how rubble has been used or removed in the past, and into our Implementation and Testing phase, in which we dug our half-scale trench and tested it. 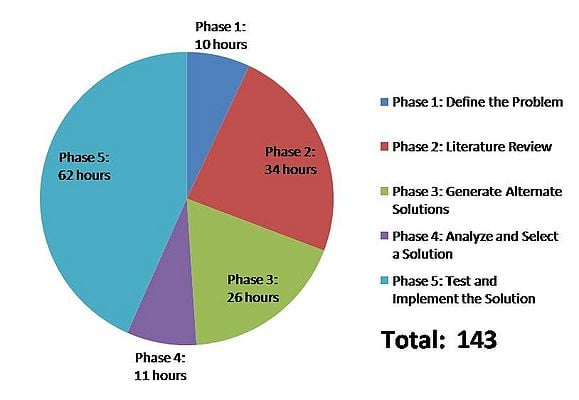 Because Rubble Trench Foundations will most likely have immovable structures place on top of it, there is no way this design could undergo maintenance until said structure is removed. 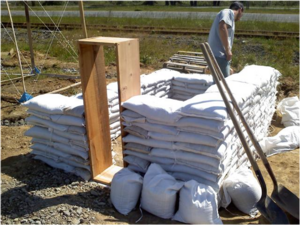 The Rubble Trench Foundation that was tested by team Rubblution in cooperation with team Humangineers. Team Humangineers project used dirt as a resource to build relief structures out of soil-filled bags, and was called WorldShelters Bags of Shelter. These bags were placed directly on top of the trench and provided direct weight on top of the Rubble Trench Foundation. The trench was built to a half scale model for an 8' x 6' structure.

The structure was left in the rain for three days and settling was calculated based on the initial and final heights of the sand bag structure. The north side of our trench had approximately 3500 lbs whereas the south side had about 1900 lbs. The north and south side's final settling amounted to 2" and 1" respectively. Further testing results are found in the results table. 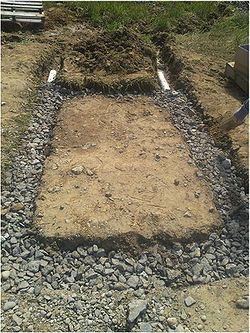 From the settling values located in table above, it is recommended to place weight greater than 2,000 pounds directly on top of the Rubble Trench Foundation. It is also recommended to first build a test rubble trench in new locations to test the settling for different variables including soil composition, precipitation, and distance from the water table.

The testing that was covered in our research is not comprehensive enough to make the Rubble Trench Foundation suitable for sites outside of Arcata Ca, US. Site specific conditions including soil composition, precipitation, and other variables need to be considered. Test structures need to be made on site where building is desired in order to properly prepare for these variables.