A New Experience on An Old Stove

Wood Cook Stoves? I'd never heard of any kind of stove other than gas or electric. All I knew about gas or electric stoves was that they cook the food I eat. Since I've always had a tremendous curiosity, I volunteered to help with this story when I heard that Sylvia Gunter still used a wood stove in cold weather.

When I first saw Sylvia's stove, the first thing I noticed was the oven. How could it have an oven if you have to burn wood to cook? How did you adjust the heat if there were no dials to turn? Where were the burners? Where did you put the wood? How did it work? Questions, questions. Sylvia looked at me as if to say, "Poor Genetta," and answering one question at a time explained to me.

The wood was put in the firebox at one side. The fire then heated the entire top as well as the oven, requiring no burners. The heat was regulated by moving pans away from the fire, building a hotter fire and regulating the dampers. It was really a very simple piece of equipment.

When I left Sylvia's, I thought I knew a lot about wood stoves. But surprise! Lois Beard heard about our project and invited Sally and me out to actually cook a meal. I found there was lots I still didn't know. Her stove was half electric and half wood. One side has electric burners, the other side has a firebox and cap lids. The oven can be heated either from the electric coils or wood heat. She has all of the advantages of both kinds of fuel. We cooked an Ozark meal of chicken, gravy, sweet potatoes and cornbread on the wood side for us to get the experience. We were getting hungrier by the minute, smelling the delicious chicken frying, so instead of waiting for the slower wood to heat up the stove, we cheated. We made a quick switch from the wood side to the electric, just until the food was almost done. Then to keep it warm, we pushed it back to the wood side away from the fire. But I learned how to operate a wood stove while Sally remembered her childhood experience.

The warmth from the wood stove on that chilly March evening made Lois' kitchen a cozy place for us to experience old-time and modern Ozark cooking and hospitality. 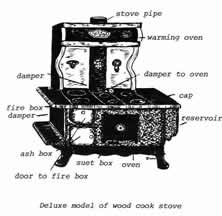 Before I started school and later during summer vacations I lived with my great-grandmother. Her way of life was completely different from what I was used to at home. One thing I remember so well was that she cooked on a wood cook stove, even though she had an electric range.

I remember waking up early each morning to the smell of breakfast and jumping up to go help, but Mama Keith and the wood stove were ahead of me. The eggs and bacon would be through at the same time as the biscuits. I never remember eating breakfast with one thing being cold, except for the orange juice.

Every once in a while I was lucky enough to get up in time to help build the fire in the stove. To light the fire Mama Keith would remove the two lids and take out the cross bar above the firebox. She put scraps of paper, corn cobs, kindling and up to eighteen inch sticks of wood in the box. From above she would light the paper with a match, then replace the cross bar and lids as the wood started burning. She would always do this because she was afraid that I would burn myself. I remember she finally let me build the fire when I was about ten or eleven.

To help the fire get started she would open the damper to let air into the fire. This helped the fire burn fast so that the stove would get hot quicker. As the stove began to get hot, she would close the damper to slow down and control the fire. One damper was located on the back side of the stove in the center. Another damper was under the door on the left side right by the firebox. She further controlled the fire by a damper in the stove pipe that moved a plate-like valve in the flue that controlled the air flow.

While the stove was getting hot, Mama Keith would fix the orange juice, set the table, put the biscuits in the pan and get the bacon and eggs ready to fry. To see if the stove was hot enough, she would sprinkle drops of water on the surface that would sizzle, pop, dance and suddenly disappear. This fascinated me because I always wondered where they went.

I remember standing on a velvet covered box on the right side of the stove away from the fire, so I could watch her cook. It was an adventure to look through the fire grate at the fire burning in the stove--much more exciting than at home looking at a sterile electric coil. I could hear the wood make popping sounds as it burned down and would notice the faint smell of wood smoke. During the cold season the welcome heat from the stove made Mama Keith's kitchen even more desirable. When it was hot outside, she would leave the back door open to keep the house as cool as possible. If I was playing outside, I could still hear the wood crackling and see the smoke drift out of the chimney.

When she started breakfast, she would put the skillet right above the firebox to get it hot enough to cook the bacon. If the fire was too hot, she would regulate the heat by moving the skillet and pots to the right away from the hottest part of the fire. If some of the food was done before the rest of the meal was ready, she would set the pots on the right side of the stove to keep warm. If she wanted something to cook faster, she would remove a cap from the stove and set the pan down in it to have closer contact with the fire. She added more wood through the little door at the left. She always had a kettle sitting in the center of the stove at the back, sending steam into the air.

By the time the top was hot enough to cook, so was the oven. After she opened the oven damper which sent the heat to the oven, she would test the oven by putting her hand in. Her many years of experience told her the oven was the right temperature to bake the biscuits. Some ovens had thermometers on the door to take the guesswork out of baking, but Mama Keith relied on feel.

Her stove had a warming shelf above the cooking surface that made a handy place to put food to keep warm from the rising heat. Other styles of stoves had warming closets that were similar to the shelves, except that they were enclosed with doors.

Mama Keith's stove was not a fancy or deluxe model like some that had doors opening into the oven from two sides, or had a cap that had one or two smaller caps within it that could be removed to set smaller pans closer to the fire. Some stoves had little fancy shelves under the warming ovens and some had fancy decorations all over. She said all that fanciness only made them harder to keep clean.

While we ate breakfast, she put the kettle on the stove to heat water for washing dishes afterwards. Some stoves had a reservoir on the right side that provided hot water whenever the stove was burning. When you needed hot water, you could dip it out with a dipper. This water could get boiling hot, depending on how hot the fire was.

The stove top was easy to clean because there were no burners to clean around. If anything spilled while cooking, it would sizzle dry. To clean the top an old piece of paper or a paper towel was rubbed over it when it was cool. After breakfast we used her stove as a garbage disposal by throwing the egg shells, paper napkins, and scraps of food into the firebox for quick disposal. 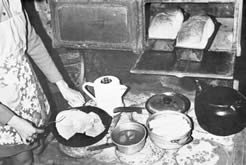 Many things can be cooked at one time on a wood stove.

As the wood burned in the firebox, the ashes fell down through slots into the ash box. To clean the ashes we would open the door to the ash box, pull the box out and empty it into a big pot that we later dumped. Then with a small shovel we cleaned out around the area where the ash box sat in case ashes fell to the side. The box was put back in place and the door shut. Ashes would also gather above the oven under the cooking surface. This needed cleaning occasionally, as well as cleaning out the little suet pan under the oven. A special T-shaped tool would rake out these ashes that collected under the oven.

The biggest chore in caring for wood stoves was polishing. Mama Keith would put on stove black about every two weeks to make it black and shiny. She wouldn't cook any meal on the stove for company unless it had been cleaned and in perfect order. She would say to me, "Everything has to be perfect," and to her a meal wasn't perfect unless it was cooked on the wood cook stove. 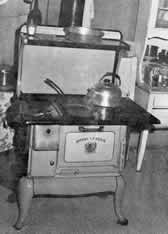 Stove with warming shelf. Notice damper on left side of firebox.

Light the fire from above.

Replace cap with stove hook and wait for fire to burn well.

Wood stoves are economical to operate, especially in the Ozarks where many people have their own wood or it is readily available.

The same fuel will heat the room as well as cook.

Hot water is available at all times in the built-in reservoir.

The same fuel will keep a kettle steaming at all times for more healthful atmosphere. Food can be kept hot without burning by moving the pans away from the fire.

Food can be kept warm in the warming ovens.

There is more cooking space on top of the stove for the whole top is a cooking area, allowing ten to twelve pans at once.

Food in big kettles and canners will cook more evenly as heat is not concentrated in one place.

The firebox makes a handy place to dispose of trash and garbage.

The smooth top is easier to clean than individual burners.

Wood stoves are self-sufficient, not dependent on outside fuel sources or breakdowns or shut offs.

There is very little to wear out or break down. Some stoves 100 years old are still being used.

There is more labor involved. You have to carry in wood. The fire is sometimes hard to start. It takes longer to heat up the stove to begin cooking.

Wood is dirty, requiring more cleaning in the kitchen.

The ashes need to be cleaned out.

The heat is not constant.

You must guess the temperature of the oven.

You can't regulate the heat accurately without much experience.

You have to keep adding wood and adjust the dampers.

The stove heats up the room making it uncomfortable on hot days.

When cooking is finished, you must let the fire burn down, or scatter it.

A wood stove takes up more space because of the stove pipe.

The stove pipe is not very attractive in the room.

The nearby wood box takes up space, is dirty and often unsightly.