This module will cover the V-Y (V to Y) and Y-V (Y to V) Advancement Flaps which utilize basic geometry to either recruit tissue or redistribute it to achieve some form of reconstruction – primarily for releasing scars and closing defects. This page will address the functions, indications, limitations, complications, and step-by-step details for V-Y and Y-V advancement flaps.

See the Thinking Like a Reconstructive Surgeon page for more details on other reconstructive options and an overview of the thought process that reconstructive surgeons utilize to determine the most appropriate reconstruction for a given patient.

The first reports of V-Y/Y-V Advancement Flaps were published by Dieffenbach in 1831 who described the use of a Y-V mucosal advancement flap to treat patients with acquired microstomia.1 His technique included triangular scar excision at the oral commissure followed by a Y-to-V advancement to widen insert tissue into the defect created by the scar excision. This technique was later modified by Kazanjian2 in the 1950s and Converse3 in the 1970s to address other forms of microstomia arising from burns and congenital malformations.

While initially described for use of peri-oral reconstruction, all three surgeons later described its use for other areas of facial reconstruction, especially the cheek and forehead regions but it was Johannes Esser in 1917 who first described the island pedicle flap which created the V-Y variant of the advancement flap in which all three sides of the advancement flap are incised to create an “island of skin” that is perfused by underlying named vessels or “pedicles.” Nearly 50 years later, work from Emmet and Barron determined that the islandized V-flap in the V-Y can survive off of random pattern blood supply (i.e. subdermal plexus) rather than requiring a defined pedicle, and, therefore, significantly improved its clinical versatility.

In 1992, O’Donnell, Briggs, and Condon proposed a variant of the islandized V-Y called the “Horn Flap” which utilizes a crescentic or curvilinear shape whose subcutaneous pedicle originates from the concave edge of the flap and allows a greater arc of rotation that allows for more advancement than a traditional “straight” V-Y flap.4 Another benefit of the “horn” or crescentic V-Y flap is that the curvature can be tailored to the topographic features of the site of reconstruction to create a curvilinear scar that is more natural appearing and easily hidden within the lines of the face, boundaries of anatomic subunits, and rhytids. Lastly, the curved design allows for more potential flap orientations to be considered, which means that reconstructive surgeons have a greater number of options to achieve the ideal reconstruction. 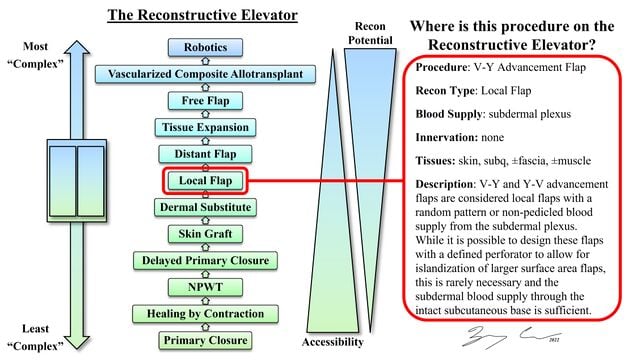 The V-Y and Y-V Advancement Flaps are classified as random pattern flaps (see Flap Classification Page, section "Flap Classification") because the triangular flap which is advanced in the process of the surgery is solely perfused by the subdermal plexus (see Flap Classification Page, section "Skin Anatomy"). The subdermal plexus is part of a complex vascular network that supplies the skin and subcutaneous tissues and is fed by perforators from underlying larger-caliber arteries. Each axial artery supplies blood to a defined area of skin known as "angiosomes," and the perforators that branch off the axial arteries supply smaller subunits known as the "perforasomes," which feed into the subdermal plexus. Because the V-Y and Y-V Advancement Flaps are random pattern flaps and are perfused by the subdermal plexus, it is critical that the flap is planned and marked appropriately to ensure vascularity is preserved within the underlying subdermal plexus that remains connected to the flap.

Location & Landmarks: This flap can be used anywhere on the body in a broad spectrum of sizes and orientations. As a result, there are no specific locations or landmarks for this flap. However, like any reconstruction, it is important to consider the nearby anatomic landmarks and anatomic subunits that need to be preserved and/or reconstructed.

Vasculature: The flap is random pattern or non-pedicled which means that is perfused by the subdermal plexus. It is possible to design the flap to include a perforator but this is not necessary nor often available.

Innervation: These flaps are not innervated as the incision and advancement process usually disrupts the cutaneous nerves. However, it is possible that a cutaneous nerve may be preserved in the case of Y-V flaps and some islandized V-Y flaps.

Donor Site & Defect Size: As discussed in detail below, the flaps are tailored to the size of the defect and can be made any size to match the reconstruction site granted adjacent tissue is available for advancement. The impact of the flap design on donor site will be discussed in greater depth below.

Functional Impact on Donor Site: There is no specific functional deficit from this flap since the donor site is closed primarily and no functional structures are disrupted. 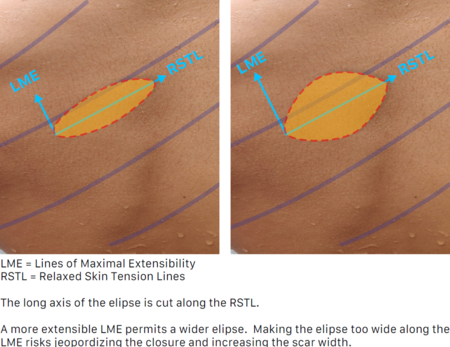 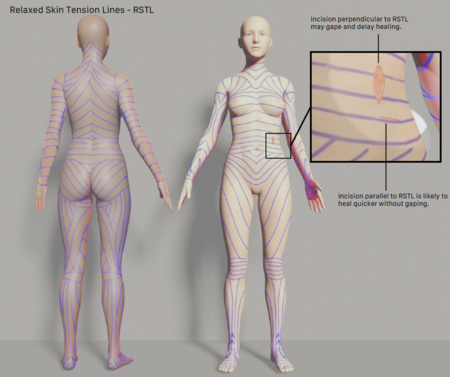 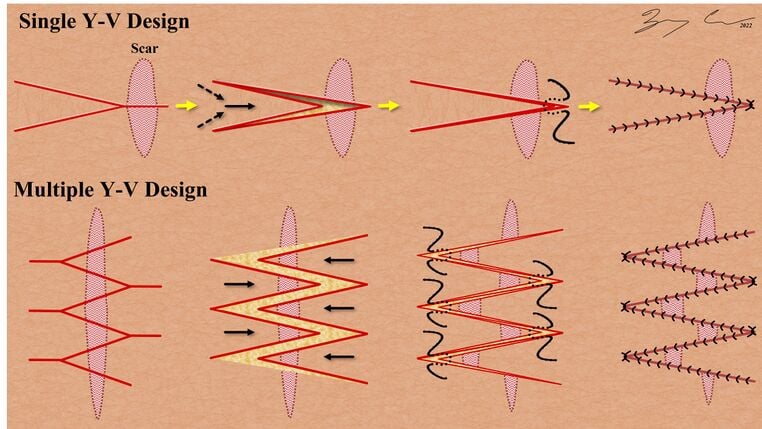 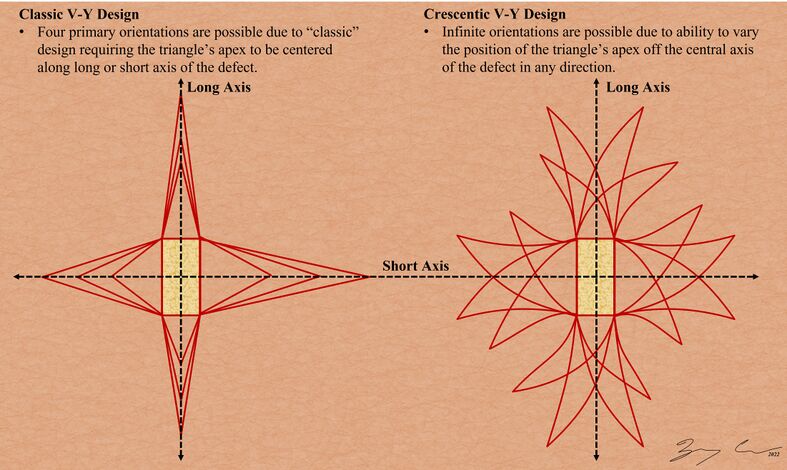 In addition to the orientation and angle of the z-plasty, it is possible to use multiple smaller z-plasties in place of one larger one. The figure below shows an example of one larger z-plasty next to 3 small z-plasties in-line with one another. The top two are before transposition of the triangular flaps and the bottom two images are after transposition. Not only does this show the change in the orientation of the limbs, but the overall change in length and width of the flap areas are compared. In both instances, the same amount of length gain is achieved with one large or multiple stacked z-plasties (i.e. 75% additional length with 60 degree angles in this example). The key difference is that compared to the length gained along the central axis, the single large z-plasty narrows or loses overall width in a 1:1 ratio whereas the 3 smaller stacked z-plasties only narrow the overall width by one-third relative to the length gained. Because of this geometric difference, multiple, small z-plasties are frequently used to release scars in areas with less tissue laxity or adjacent skin to recruit. The multiple stacked z-plasties also "deforms" the surrounding area less than the single larger z-plasty because of that decreased narrowing, and this can be advantageous in areas close to other important anatomic structures or landmarks like in the face, hands, or genitalia. 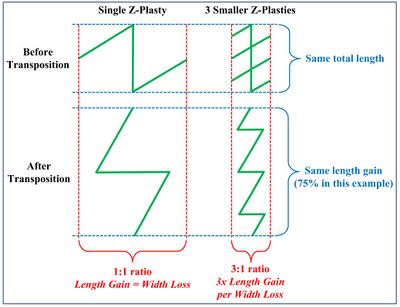 Page data
Retrieved from "https://www.appropedia.org/w/index.php?title=V-Y_Advancement_Flap_-_Background&oldid=632987"
Cookies help us deliver our services. By using our services, you agree to our use of cookies.
Categories:
Maintenance categories:
Comments
Privacy policy · About Appropedia · Disclaimers · Mobile view · Content is available under CC-BY-SA-4.0 unless otherwise noted.
</html