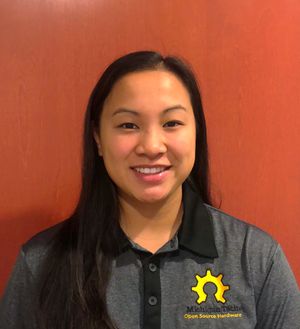 Hello, I am Erica Umlor. I am currently pursuing a Computer Engineering Bachelor Degree and a Psychology minor. I am in the middle of my fourth year at Michigan Tech and will be graduating spring of 2020.

This semester I worked with Zach and Dan on the GM Robotic Arm project. The arm's purpose is to remove a 3D from the bed so a new print can begin. This would make the process possible without being in the lab at all. Using Octoprint, we can start the print from anywhere with internet, and with the arm, we can clear the bed. When I joined this semester, the arm was mostly assembled, so I do not know much about the specific mechanics of it, but I did most of the programming for the arm. I wrote some step by step code in DDE in JavaScript. They are small line commands that tell the arm to move to specific places. There is a large cage that we have assembled. It has a 3D printer and robotic arm inside. It also has some cool LED strip lights that light it up. As of right now, there are several limitations with the arm. We have to push a button on the laptop to start the robotic arm once the print is finished. Also, the code for the arm only works for one specific print. I learned a lot about how the arm works and hope to continue working on it next semester so it can be used to its full potential. Next semester the plan is to try and make the arm and the 3D printer talk to each other. When the print is finished, it will somehow signal the arm to begin the motions to remove the print from the bed. This way we don't have to push the button on the laptop. We also want to eliminate the need for the laptop. We have a raspberry pi that can start the print outside of the cage, and we think it will be possible to use DDE on it. The next step to improving the project will be to add some sort of feedback on the gripper. There was some issues with the first servo that we used for the gripper. The conclusion was that we pushed the limits too hard and stripped the gears inside. If we have feedback from how hard the gripper is squeezing, we can eliminate that issue. I am glad that I got to gain experience working on this project this semester.

This semester I was in charge of the team working on this project. Haddington notified us that they designed a new DEXTER arm that is more compact and easier to build. They put us on the list for a swap out.

The first few weeks of the semester I introduced the arm to the new members of my team. After a few weeks we met up and tried to calibrate the arm again. The results of our calibration are in the PDF below. The calibration was unsuccessful and we emailed Haddington for some help. It is now the end of the semester and we have no response to our results. The calibration of the encoders is not needed, but it would be useful if the arm knew where it was when we started it up every time. Instead we have to accurately start the arm in the correct position before we turn it on. 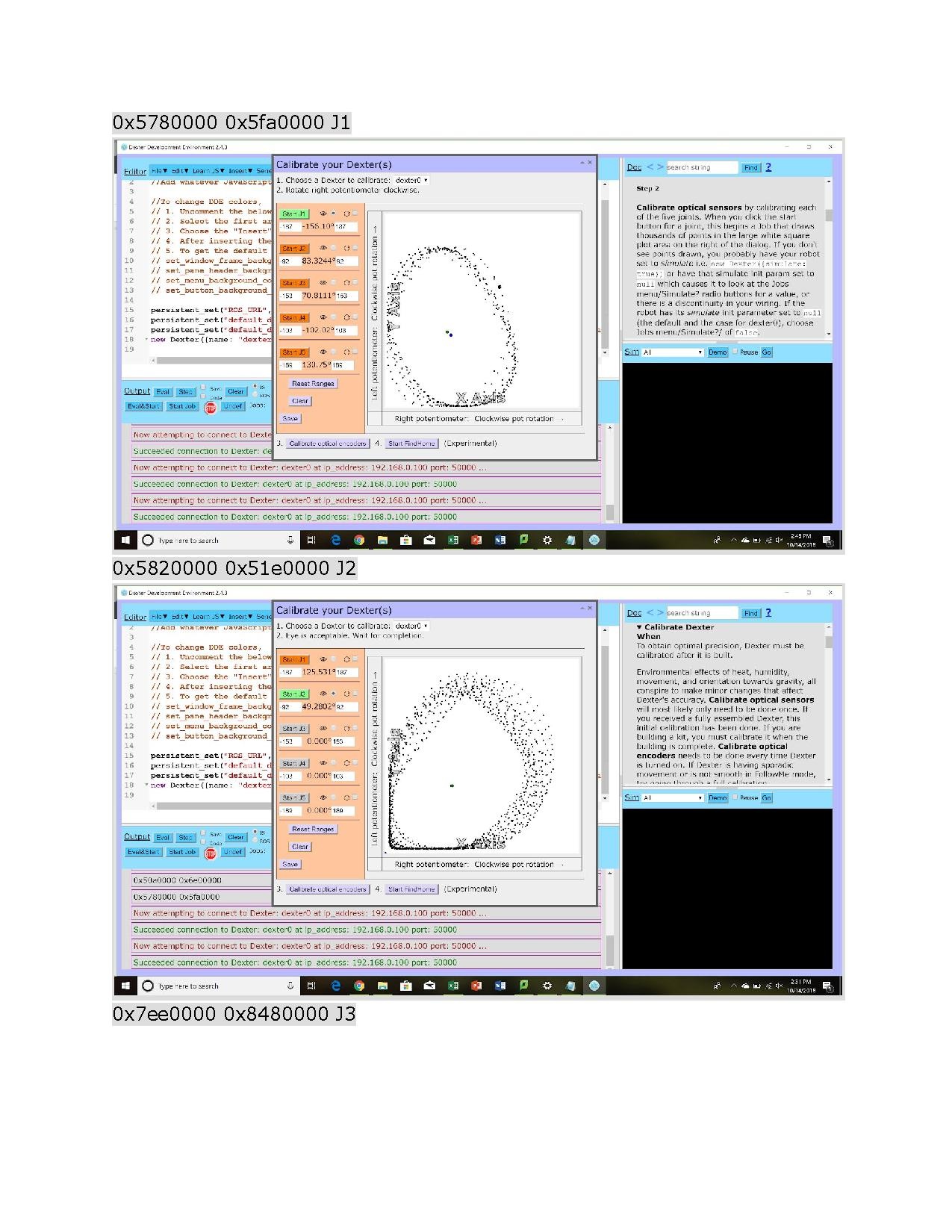 We set up a video chat with Haddington and talked about there progress over the summer while we were all gone. They didn't make a lot of progress on the wireless communication between the arm and the 3D printer. They told us they designed a new gripper that has built in feedback so we don't have to worry about it squeezing too hard. We figured out how to use an Xbox controller and the laptop to control the arm. It lets you move the arm and then pull coordinates from wherever the arm is currently at. We haven't figured out how to control the gripper with it yet.

We continued to figure out how to use the Xbox controller to move the arm. We were using the teach me code built in for the controller and are going to write our own so we can move the gripper too. The new gripper was on Thingiverse, so we 3D printed those parts and then ordered the motors and bearings. We built the new gripper and then realized we needed to order another bearing. We didn't get it until the last week of the semester so that will be finished next semester. Some pictures of the new gripper are below. 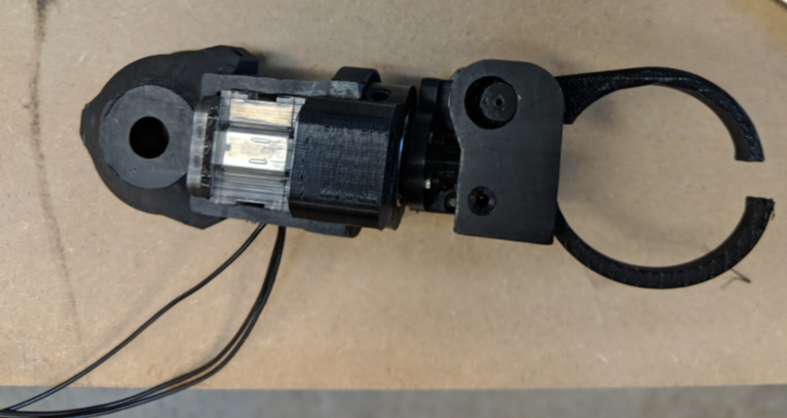 Goals for next semester

This semester I worked on three projects, the Robot Arm, filament dryer and lasersaur. I worked on robot arm before spring break and then the other two projects after break. This semester the President, Zach, had us make a power point for each project. We were to update these presentations weekly with things we finished in the week and things we want to complete in the next week. This was a great way to keep track of our progress over the semester.

We got the bearings and assembled the new gripper. We wired the new gripper to DEXTER. When we ran the demo code, everything except the gripper worked. None of the commands worked so we did some research on the gripper on gitHub and Haddington's website. We found an update for DEXTER that was for the new gripper. When we went to update the arm, the start up file got deleted somehow, so we couldn't connect to the arm. We emailed Haddington and they responded about a week later saying they would try and get us the new image file for the SD card. They didn't get back to us with the image file until after spring break. We decided to attach the old gripper back on so we could still use the arm to attempt to take off the removable build plate.

I was still the team lead for this project, I just wasn't working directly with it. I scheduled the meetings and oversaw the groups work. They found a new more responsive contact at Haddington that sent the new image file for the SD card. They got the arm back to its original state and had a working demo for the most part. The old gripper also doesn't work so that will need to be fixed next year. The new firmware changed some of the settings and controls with the Xbox controller so they were practicing with that.

Goals for next semester

We want to have a working gripper and have several more demos. I personally will not be on this project next semester because I will have my senior design project.

I worked on this project with Drew. I modeled part of the cart system where the belt goes into. I modeled a belt mount that can hold a bearing in it.

We printed all of the parts for the lasersaur. The carts didn't fit the belt and the belt mounts didn't fit either so we redesigned them and printed them again.

We had the cart system fully assembled and the x and y moved correctly. We saw that the y axis would move the opposite way so we reconnected the motor a different way and then it stopped working.

We tried turning on the laser and it wouldn't register the @fire command. We soon realized that it didn't work with a Mac but did with any other laptop. We connected an external stepper motor driver to see if that could solve the issue with the y motor. This would allow for more current to go to the motor. The configuration on the smoothie ware site didn't work. We tried hooking up a different stepper motor to see if our motor was the issue, but that motor didn't work either.

I worked on this project a little with Zach. I wrote the code that turns the heat lamps on and off depending on the temperature inside the box. I also wired a solid state relay into the power cord so the heat lamps could be turned on and off without having to unplug them.

Overall and Plan for Next Year

The last week of the semester I worked on documentation in google drive and here on the appropedia page. I made a new lasersaur and filament dryer project page. (Since the project isn't complete there isn't anything on those pages. All the files that are we used are on our shared google drive. They will be posted to the project page once we are complete with the project. Next year I will be mostly working on my senior design with Zach and Drew.

This semester I began my senior design project. Here is the project page. We created a gantt chart at the beginning of the semester and have updated it throughout the semester. I am the Software lead. This semesters goals for the project as a whole was to get the robot built and moving. I was in charge of the wire following system. This consists of a circuit that can transmit a specific frequency through a wire that is up to 100 ft long. This wire will be buried in the garden in the path that the robot should take. Then there is another circuit located on the robot that has two inductors on it. These inductors will act like antennas off of the robot to read the frequency of the buried wire. The values will be sent to a raspberry pi that will tell the robot to turn left or right depending on how close it gets to the wire. I found these circuits on a website and built them in the lab. I created 3D printed wire sensor holders that will be the physical antennas. Here is that project page. Testing will be completed during finals week and I will begin researching and working on the website user interface. We have met with GM three times this semester to get some guidance and feedback on our project. Next semesters plans for me will be to create a web page so the user can control the robot from their phone or laptop. Then I will also be working on programming the moisture and nitrogen sensor feedback.

We ordered the PCBs for the wire generating and sensor circuits. They arrived during week 4. I soldered the components and tested the sensors with some code that I wrote. I also started learning how the ODrive motors worked and wrote test code for that. I combined the motor and sensor code together to run a complete test on the guidance system for the Growbot. Testing was to be completed after I got back from Spring Break, but unforeseen circumstances prevented this.

I mostly worked on documentation, due to the COVID-19 pandemic. My team leader took the Growbot home and tested some of my code. It was difficult editing the code efficiently without the Growbot in hand. Our team continued to meet with GM and attend EMI meetings on Zoom. We participated in the online version of Design Expo 2020. I created the OSHE Growbot Guidance System page for my part of the Growbot Project. I also made this page with some additional instructions Wire Following System.