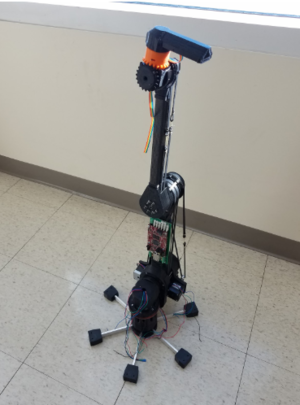 DEXTER robot arm
The Open Source Hardware Enterprise from Michigan Technological University is working on the DEXTER robot arm project. It is sponsored by General Motors and was started in Fall 2017.

The goal of this project is to automate the 3D printing process. It started when the OSHE was asked by the university to print hundreds of husky statues that took 8 hours each to print. Instead of having to remember to come into the lab every eight hours and start a new print, it would be much easier if the process was automatic. We want the robotic arm to know when the 3D print is complete, remove the finished print, and then tell the 3D printer to begin again.

The automation project utilizes the opensource 3D printer the Prusa i3 M2 developed by Prusa Research as well as the opensource robotic arm named Dexter developed by Haddington Dynamics. The enterprise houses these two pieces of equipment in a safety cage that was developed with the guidance of General Motors.

--Built the automation cage with the guidance of GM

--Worked on completing the modular gripper for Dexter