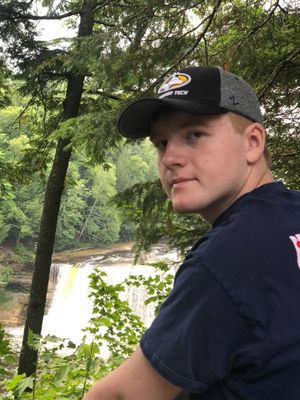 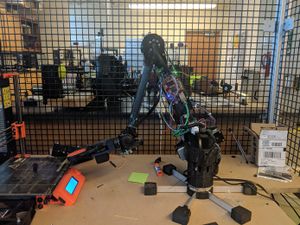 GM Robotic Arm: This semester I joined a team working on automating the 3D printing process with the Dexter robotic arm developed by Haddington Dynamics. The 3D printer that we are using to automate the 3D printing process is the Prusa i3 Mk2. To start I was introduced to the functionality of the Dexter robotic arm. I learned the basics of DDE’s (Dexter Development Environment) functionality. I created a short test program to run on the arm with the help of the rest of the members on the, you can find the short program here: Media:Dexter_Introduction_Demo_code.pdf. After my introduction to the arm was complete, we worked on an Ideas for removing 3D prints from the print bed and came up with the idea of removing the print bed itself instead of the print because there will always be a consistent place to grip even if the size and shape of the print changes.

For a break down of all the materials used in the Dexter Modular end effector, download the BOM here: Media:Dexter_Gripper_BOM.xlsx (not all products are still available at the sources listed)

GM Robotic Arm: This Semester we updated the firmware on the Dexter robotic arm to the most recent release (Firmware information). The most recent firmware changes support for the RC servo motors, requiring an update to the Demo code. To solve this problem, we changed the EESpan call to “'w' 65 dutycycle” to send a signal directly to its address instead of calling the servo function. A new 3D printing automation demo program can be found here:(will be added soon). We also worked on updating the cage set up for demos, in the update we created new fan mounts and updated the cage’s lighting. 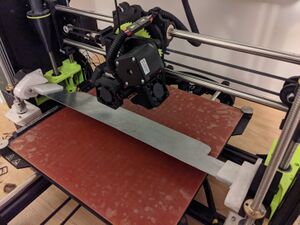 Print Farm Automation: This semester we took a step back to look at the goals of this project, we created a list of goals that we decided to focus on with this project:
- Consistent Print Removal
- Minimal Modification to the Printer
- Low-Cost Components
- Print Que for Printing
With these goals, I focused on the mechanical aspects of the project. I was able to design and 3D print the first version of the cart for the print remover system (link to be added). I also finished designing the z-axis movement system(image, and link here), To assemble it we still need to order parts so it won't be built until next semester.

General: This semester I helped reorganize and clean our lab space. To reorganize the lab we set up a printer wall with all of the enterprises 3D printers so that they could all be accessible for easy use. To help keep the lab clean we allocated storage space for each project team, giving each team plenty of room to be organized.

Print Farm Automation: This semester I was able to fully assemble the first version of the print remover for testing. with the scraper fully assembled I've started to wright test gcode to move the system (example test gcode can be found here). The gcode is able to send a command to the two z-axis servo motors to move the scraper down to the print bed and a command to the y-axis servo motor to move the print into the scraper at the end of the print. Currently, the system isn't finished and I have not tried to set it up to automatically run at the end of the print yet. I will be working on this over the summer and next semester.

General: This semester I Worked with each team in the enterprise to create a video summary of each of our projects for the 2020 Desing Expo at Michigan Technological University.