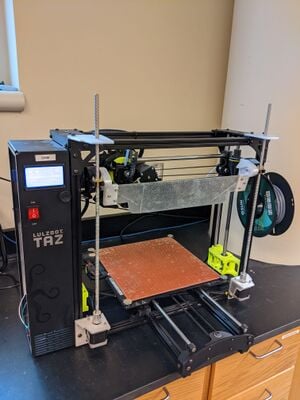 The problem our team identified is the level of difficulty in producing a large quantity of prints. More specifically, it is inefficient to require human intervention at the beginning and end of each print. If this problem were addressed, it would allow the operator to queue several prints, leave, and return to collect the completed prints.

To develop a simple, low cost, open source solution for automating FDM printing at the hobbyist level. Automation of a consumer grade 3D printer would include configurable software to modify G-code, part removal hardware which can be installed externally to the 3D printer without modification, and a part storage solution which could accept multiple iterations of any potential design printed with the project solution. The project will feature a few solutions designed to be simple and cost effective in order to keep the barrier to entry as low as possible. The parts sourced for the project will be 3D printed when possible, use M3 nuts, bolts, and washers, one small piece of sheet metal, and only requires two external stepper motors, couplers, and lead screws. This project would maximize the productivity of most consumer-grade 3D printer designs and would massively reduce the amount of time hobbyists waste before and after a print's execution. When completed, the solution should ideally be equal to or more reliable that the base printer model.

FDM printing has revolutionized the way industry leaders, researchers, and hobbyists alike design, prototype, and manufacture new parts and products. It has granted individuals access to the same level of quality and efficiency as could only be achieved previously by more costly large-scale productions. While individuals have had access to these advantages in recent years, they have not benefited from the automation potential offered by manufacturing of this kind. Products designed and manufactured using the FDM printing process are extremely time consuming at the hobbyist level, as human intervention is required both before and after the machine's operation. If the FDM printing process were completely automated through queue, print, and removal, the productivity potential of each machine could be realized by both the hobbyist as well as the manufacturing industry.

This project started when the OSHE was asked by the university to print hundreds of husky statues that took 8 hours each to print. Instead of having to remember to come into the lab every eight hours and start a new print, it would be much easier if the process was automatic. We want the robotic arm to know when the 3D print is complete, remove the finished print, and then tell the 3D printer to begin again.

In order to begin the assembly (and design) of the project, actions should be taken to accommodate the situation accordingly. Example files will be provided, and can be modified or used as-is to meet similar design restrictions.

WARNING: Read directions completely before attempting. While using any part, program, or printer for the first few times, exercise caution and restraint while maneuvering the scraper. Collisions can damage both the scraper and printer. Be ready to stop the machine at a moment's notice, and if any part is questionably placed or maneuvered, turn off the machine and verify that the intended operation was taking place and all parts are in order. Make sure the Again.py, init.txt, and iter.txt scripts have the right heights and movement commands for your printer before starting a print. This may take some trial and error to get just right.

In order to assemble, affix each printed part to the printer in the order the actions are listed (i.e. start with left motor bracket and end with scraper). Use washers on all printed surfaces to avoid crushing them, and use caution when tightening. When affixing the scraper clip to the hinge mounts, insert the nut into the bottom side of the hinge mount, and insert the bolt from the topside. Then glue the bottom side of the hinge mounts to the rail carts. If desired, accommodate screw holes to attach the hinge mounts to the rail carts. When inserting the bolts into any part of the scraper such as the scraper cover, scraper clip, or scraper rib, use caution to avoid collisions with the printer frame, printer head, or printer bed. Orient the screws properly to minimize the chance of collisions, and file the screws to an appropriate length if needed.

To wire the stepper motors, refer to the wiring and board diagrams the manufacturer has provided for the printer. The TAZ 6 files used for this project are available below. There are several potential points where a harness can be made and the dual extruder signal can be used, but for the purposes of this project the connection was made on a board inside the printer rather than the external (intended) dual extruder harness. Crimp the four necessary wires into the pins, insert into the connector, insert connector into the intended spot, and connect the loose wires to the stepper motors with the wire nuts. The wire nuts are highly recommended, as it is easiest to wire the motors through trial and error due to the variability of wiring schemes. Be sure the stepper motors are not connected to the lead screws while testing. Once both motors move in sync in the intended direction and no longer skip any steps, move on to the next part.

To operate the print queueing feature, simply run the Again.py program in the same directory as the dependent .txt files and the desired G-Code files before moving the completed G-Code to the file storage location intended for printing. Follow the instructions as they appear in the console. NOTE: In order for the program to operate correctly, you need to include the file extensions (e.g. .gcode) and verify that the scraper moves as intended. Additionally, all of the automatic movement features present in Again.py, init.txt, and iter.txt should be tested under close supervision multiple times in a row without re-initialization.