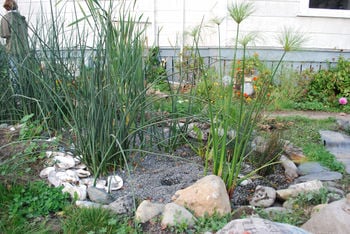 This page is dedicated to describing the Bottoms Greywater Marsh located in Arcata CA. Construction on the marsh began April 2009. The marsh was built by employees and volunteers of Cal Poly Humboldt's Campus Center for Appropriate Technology (CCAT), as a service learning project, and is currently in the testing phase of development. The system's owner is former director of the CCAT at HSU. His desicion to build a greywater marsh arose from a desire for a garden pond and an interest in greywater systems.[1] This page will describe the overview of the workings of the Bottoms Greywater Marsh. For more information on the plumbing of this system see The Bottoms wildlife pond greywater plumbing.

Greywater is defined as wastewater from domestic activities such as dishwashing, laundry, and bathing, that is recycled and reused for various tasks, especially for gardening or flushing toilets.[2][3]

Water from toilets is regarded as blackwater because it contains bodily wastes.[4] Wastewater containing substantial amounts of food residues or high concentrations of toxic chemicals from household cleaners, etc. also falls into the category of blackwater. Blackwater is not recycled and flows into a septic tank or sewer. 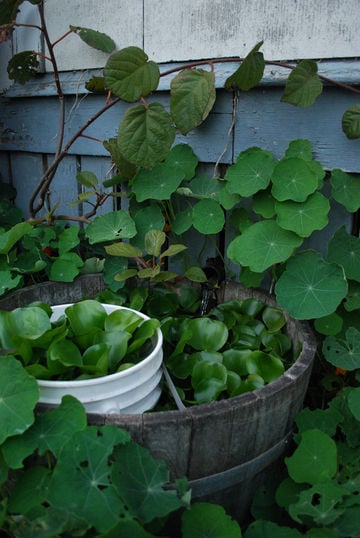 The plumbing in the house is separated into two parts, greywater and blackwater. The blackwater flows to the sewer to be treated at the water treatment plant, the greywater flows into the marsh to be treated on-site. The greywater marsh is made up of four parts: oil separator/settlement tank, treatment marsh, storage (pond), and overflow basin. Figure 1 is a flow chart illustrating the process. 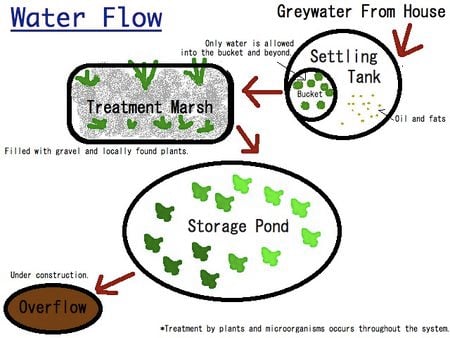 How the Marsh Works[edit | edit source]

Three sources within the residence contribute to the greywater effluent used for the system: the shower, the bathroom sink, and dishwasher. Water from these lines flows to a drainage pipe extending outside. The process of bioremediation begins after effluent from the drainage pipe flows into a settling tank located at ground level.. The house sits two and a half feet above the ground to make draining possible. 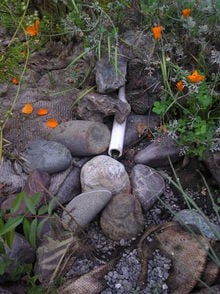 The settling tank, shown in Figure 2, consists of a wine barrel containing water hyacinth and a partially submerged, bottomless bucket. The purpose of the water hyacinth growing inside the settling tank is to aid in decreasing the water's turbidity by removing floccules (i.e. micro-organism aggregate or colloidal particles floating in or on a liquid) and organic matter. The root structure also facilitates the coagulation and breaking down of oils towards the surface by creating a favorable environment for various organisms. The bucket acts as an oil separator. Nearly all lipids (i.e. fat, wax and oil) are less dense than water. Consequently, only water is allowed to enter beneath the bucket to the outflow pipe, leaving the fat and oil floating on the surface of the wooden barrel. The water then flows through the outflow pipe and into the treatment marsh depicted in Figure 3.

The dimensions of the marsh are roughly twelve feet long, two and a half feet wide, and three feet deep. 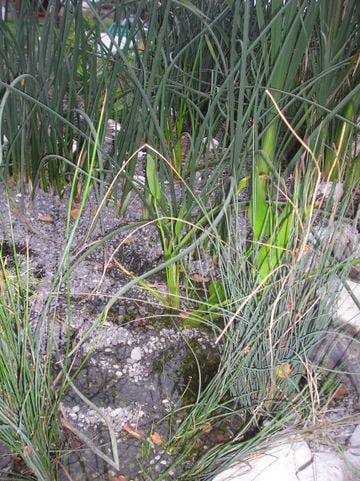 Eighty cubic feet of pea gravel was used to fill the marsh. The gravel aids in the filtration process and provides support for root structure for the variety of plants in the marsh. These plants absorb nutrients and inorganic matter from the greywater upon contact with their roots. Two baffles, one near the marsh surface and the other near its base, were constructed several feet from each other. The baffles effectively help maximize the marsh's ability to filter by increasing the flow of water and forcing as much as possible through the pea gravel, over plant roots, and down length of the marsh. From the marsh, the outflow pipe in Figure 5 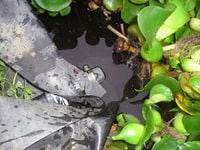 leads to the storage pond pictured in Figure 6.

The dimensions of the pond are roughly four feet deep and ten feet wide in diameter. The pond is the main area where water is stored and where the final steps of bioremediation occur. Water hyacinth is used extensively in the storage pond. These plants are known to reduce nitrogen levels, heavy metals, pathogens and other organic compounds from water. The removal of these compounds is evident in the considerable difference in the coloration of these plants, from one end of the pond to the other, suggesting a gradient in the water's nitrogen levels as the hyacinth begins to absorb nutrients near the drainage source, shown in Figure 6. The water hyacinth's rapid growth further aids in the extraction of nutrients from the water as the plants require constant removal. Later, the plants are used for compost material.

To safeguard against possible flooding from rain, an overflow pond is being built which would allow for the accumulation of any excessive water amounts. As the storage pond reaches its maximum capacity, water will flow through a pipe into the adjacent pond. By having an overflow pond, the surrounding water systems will be safe from potential contamination due to flooding. 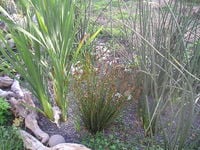 Figure 7: Examples of plants used in the treatment marsh. (Photo by J. Vasquez)

All plants are locally available and/or native plants. Everything is collected from nearby wetlands.[1] This method was a cost-saving measure as well as a security measure as these plants are known to be suited to the Humboldt climate. Figure 7 is a photo of the plants contained in the treatment marsh. All the plants are flourishing and have multiplied over the summer. The main plant used for treating the nitrogen rich water is water hyacinth. Papyrus and cattail are also used to leech pollutants from the water.

The overall building cost of The Bottoms Wildlife Pond Greywater Marsh was inexpensive compared to other greywater projects.[6] Although, increasing the time needed to construct the project; all the labor was provided through friends and family, thereby reducing the total cost to $610 USD[1]. Table 1 illustrates the costs of material components.

Work on The Bottoms Wildlife Pond Greywater Marsh began in April 2009.[6] The majority of the project is completed, but there is still work being done. The overflow pond is not finished and there are still some small jobs to be done on the surrounding ponds as well. The site still needs to be tested for efficiency and to confirm that the marsh is functioning correctly.

As of now, the efficiency of the system is hard to judge. The building process started in April of 2009, and the marsh is still a work in progress. No testing has been done to judge the effectiveness of the marsh. So far the main indicator of success is that since being built, there have been no leaks detected, and the marsh has begun to attract various birds and amphibian species such as the Phoebes Fly Catcher, Barn Swallow and the Pacific Tree Frog.[1] Another indicator of success is that there is a visible color gradient displayed by the water hyacinth in the storage pond (Figure 5) indicating that the plants are successfully removing nitrogen from the water.