Please leave any comments on the Discussion page (see tab above) including additional resources/papers/links etc. Papers can be added to relevant sections if done in chronological order with all citation information and short synopsis or abstract. Thank You.

Though complete detailed study is present in the 'Search List' provided above, below mentioned data is either the interpretation of the subjects or directly taken from the report as it is

Solar energy has been evolving as a mainstream form of renewable energy generation since the early 1990’s. Solar energy presents itself as an opportunity for airports and aviation industry to satisfy on-site power demand and to reduce energy costs. While solar energy is seen beneficiary in all matters but in aviation sector particularly, it does introduce some new and unknown issues. The biggest one is said to be the possibility of glare (or reflectivity) and frequency interference in communication systems. The earlier mentioned two and a few other challenges have made the FAA FAA review and lay down approval process of this technology.

For the airport environment, PV can be placed in locations that are not used for aviation activities and therefore have little value to the airport or for alternative developments.[1]

Its because of the availability of ample space and huge demand of power by the airports themselves has led to the huge interest of the power sector towards airports! But before going ahead there are a number of new challenges specific to aviation industry-

There are 3 subjects of major concern here apart from airport sponsor’s Federal obligations regarding financial self-sustainability and retention of airport revenue, as well as national environmental policy-

Often 1000W/m^2 is used in calculations as an estimate of the solar energy interacting with a panel when no other information is available. According to researchers at Sandia National Lab, flash blindness for a period of 4-12 seconds (i.e., time to recovery of vision) occurs when 7-11 W/m^2 (or 650-1,100 lumens/m^2) reaches the eye. [2]

One has to consider whether the reflected light is “specular” or “diffuse”. Specular reflection are more concentrated type of light reflections and occurs when the reflecting surface is smooth and polished. The exact percentage of light that is specularly reflected from PV panels is currently unknown. Outside of very unusual circumstances, flash blindness can only occur from specular reflections. [1]

FAA has no specific standards for airport solar facilities and potential glare, the type of glare analysis that is needed may vary. Depending on site specifics (e.g., existing land uses, location and size of the project) an acceptable evaluation could involve one or more of the following levels of assessment:[1]

(1) A qualitative analysis of potential impact in consultation with the Control Tower, pilots, and airport officials

(3) A geometric analysis to determine days and times when an impact is predicted.

Not all discussed necessarily power producers but are called, as they save the electricity used for the purpose they solve

Disadvantage - The central receiver tower will certainly breach airspace and other issues like reflectivity (Major as it is based on reflection instead of absorption compared to solar PV, thermal plumes, radar interference.

Advantage - No problems regarding reflectivity, thermal plumes, radar interference or even airspace breach

Disadvantage - Suitable for domestic use compared to airport system

Advantage - No problems regarding reflectivity, thermal plumes, radar interference or even airspace breach

Disadvantage - These systems are especially effective in sunny climates with long heating seasons.

It is important to understand that not all the vacant land in an airport system can be used for Solar power generation. Locations like mentioned below must be clearly understood-[1]

In determining a proposed solar projects compatibility with aeronautical activities, following should be considered-[1]

RPZ - As the name suggests is not usually available for any kind of construction but exceptional cases like 'Solar Project Siting at Fresno Yosemite International Airport' do exist, where after proper consideration some exceptions were made.

2 projects carried out, one with single axis tracking system and the other with fixed mounted- Fixed mounted turned out to be more profitable as it was more robust and less affected by wind/ dust/ wear & Tear thus, reducing maintenance cost and frequency! 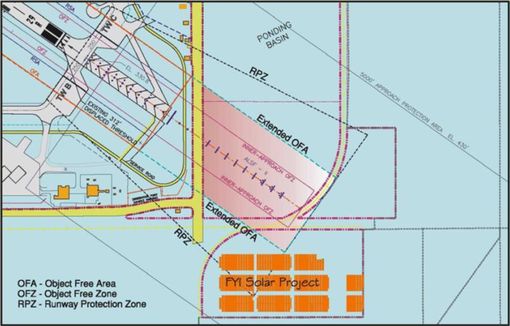 This airport used RPZ area after finding out that, This area, due to its location relative to air traffic, was unusable for any land uses requiring regular presence by people. In addition, unmanned structures were constrained to only low profile ones that did not penetrate into the approach zone. For those reasons, the land had little value which made it a very suitable location for a solar project. 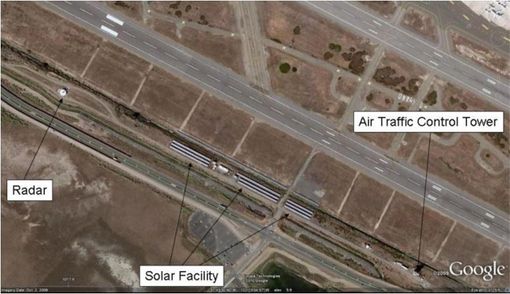 A great example where three of the major concerns of an airport+Solar colaboration was solved.

The electricity conversion efficiency for today’s photovoltaic panels is between 6 and 20% of the total energy available. In comparison, the burning of fossil fuels is about 28% efficient. Also, as operating panels age and degrade, their efficiency goes down (on average about 0.5% each year).

Often 1000W/m2 is used in calculations as an estimate of the solar energy interacting with a panel when no other information is available. According to researchers at Sandia National Lab, flash blindness for a period of 4-12 seconds (i.e., time to recovery of vision) occurs when 7-11 W/m2 (or 650-1,100 lumens/m2) reaches the eye. Using the previously mentioned value for solar irradiance, this would mean roughly 20 W/m2 are reflected off of a typical PV panel. This is close to that of water