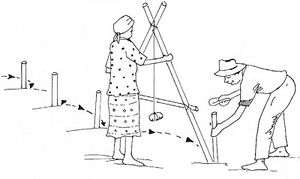 According to United Nations Environment Programme (UNEP), the volume of freshwater resources is about 2.5 per cent of the total volume of water on earth. Of this freshwater, only 30 per cent is stored in the form of groundwater which accounts for 97 per cent of all freshwater potentially available for human consumption.[1] However, much of the groundwater we rely on is slowly being depleted from underground aquifers through pumping. The overpumping of groundwater is causing water tables to fall across large areas of northern China, India, Pakistan, Iran, the Middle East, Mexico, and the western United States. Scientists have recently estimated in India that groundwater is being depleted across the country's north at a rate of 54 billion cubic meters per year. This is putting the nation's food supply and the region's 114 million people—are increasingly at risk.[2]

As a result of falling water tables, many rural communities around the world are facing problems such as increased pumping costs, drying up of wells, deterioration of water quality from salt water intrusion and reduction of water in streams and lakes. This is a result of a greater amount of water being withdrawn than deposited back into the aquifer. Groundwater recharge is what replenishes underground aquifers and can be increased through infiltration. Infiltration is the process of which of water on the ground surface enters the soil and flows into the unsaturated zone. The following information provides background information and design options for a small-scale infiltration system for the purpose of groundwater recharge. This system consists of constructing swales and berms to trap precipitation run-off and promote infiltration. A step-by-step design is provided as well as external links for additional information. 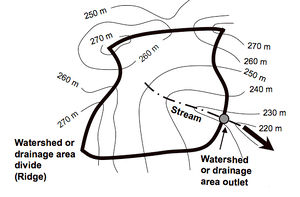 Watershed Delineation
A watershed is an area of land where surface water from precipitation drains into a body of water. This area also contains drainage areas in which water from a smaller portion of land drains through a downstream point. A drainage area is bounded by a divide, a line made up of a group of high points around the drainage area. To deliniate a drainage area, start with a contour map and draw a divide. The divide line runs through the highest points and is perpendicular to the contour lines on the map. An example is shown in the image on the right. At a smaller scale, delineation can be used to determine the drainage area for an infiltration trench or swale.

Infiltration
InfiltrationW is the process of water seeping through pore spaces in the subsurface soil due to gravity and capillary forces. During a storm, infiltration largely determines how much surface runoff is generated.

Surface Runoff
Surface RunoffW is the remaining portion of precipitation that becomes overland flow and accumulates in local streams and rivers. This excess water flow travels in a down-gradient direction and drains to a common point within a watershed. Runoff occurs when the soil had reached its maximum infiltration capacity.

The required infiltration area can be used to determine the dimensions of the swale:

The Water Budget
The basic components of the hydrological cycle include precipitation, evaporation, evapotranspiration, infiltration, overland flow, streamflow and groundwater flow. For a large watershed, a conceptual mathematical model of the overall hydrological budget is shown below. Using this model, the factors affecting groundwater recharge are identified.[3] This equation shows that storage will increase if surface runoff (R) decreases. It is also important to note that a change in storage is susceptible to factors such as precipitation, evaporation, and transpiration, all things which we have no control over.

Soil Permeability
Permeability is a measure of how easily a fluid, can pass through a porous medium such as soil. It is also governed by soil porosity which is the pore space between soil particles. The pore sizes and their connectivity determines whether a soil has high or low permeability. High porosity soils such as gravel and sand have high permeabilities which allow for greater amounts of infiltration. Low porosity soils such as clay have very low infiltration rates. The table below shows a range of permeability for various types of soils.

The combination of following structures can be used to increase infiltration of precipitation for the purpose of groundwater recharge. Further information can be found in Technical Specifications and Installation.

Swales are a type of structure that promote groundwater recharge. Similar to a trench, swales are dug into the ground in order to retain run-off water. The water then spreads and slows down allowing it to infiltrate into the subsurface. This creates a groundwater plume that replenishes underground aquifers and supports the growth of vegetation in areas down-gradient to the swale.

A berm is an earth barrier separating two areas of land that can be built to serve a variety of purposes. Berms are often used to control erosion and sedimentation by reducing the rate of surface runoff. As a result, berms either reduce the velocity of the water or direct water to areas that are not susceptible to erosion. This helps reduce adverse effects of running water on exposed topsoil. Berms are typically small mounds composed of soil, gravel or rocks and if well maintained can last for many years.

Groundwater recharge can significantly increase water supply levels in underground aquifers, however not all regions in the world use groundwater. Communities that are reliant on groundwater and face yearly decreases in water table levels will experience the most change from groundwater recharge. Benefits communities have seen in the past are listed beneath regions that can benefit.

Most monsoon rains flood fields, filling rivers and streams with water that rushes out—unused—to the sea. This is the very water that could help the farmer year-round.[4]

Swales should be constructed along contour lines. This ensures the water will flow into the swale and not around it. The soils in the area should also be semi-pervious to allow for infiltration. The swale should also be placed down-gradient of areas with high runoff rates. This may include impervious surfaces such as roads, pathways or soils of low permeability.

Another important consideration is the location of the community's drinking water well. Any groundwater recharge that occurs as a result of the swales will move down-gradient towards the nearest surface water such as a small stream, river or lake. The groundwater tends to follow the topography of the land, allowing it to act as a general guideline for determining subsurface flow patterns. It is important that the well is located down-gradient of the swales in order for the underground aquifer to be replenished.

Swales are most effective when placed on a slope. This allows for efficient rainwater capture. A small incline is also an acceptable location because a slope of about 2.5 cm for every meter in length is enough to move water.[5] The swales can also be placed in sequence along the slope. Additional swales will capture any spillovers that occur uphill.

Three common types of soil include clay, sandy soil and loam. The following are described below.[6]

The following table shows percolationW rates for different soil types.It is recommended that loam with a percolation rate of 15 mm/h is the minimum used for an infiltration swale. The water will not be able to infiltrate at a fast enough rate to increase groundwater recharge if infiltration rate is too low.

Swales and berms are relatively easy to construct and do not require a large amount of materials or tools. To dig the swale, a shovel or any other type of digging tool can be used to remove soil. A measuring tool might also be useful for determining the depth and side slopes of the swale and berm.

For material used to form the berm, low permeability soils such as clay and rocks are recommended. Once dug, the swales can be filled in with bulk materials such as leaves, rotten wood or straw. High permeability material such as gravel can also be used. Usually materials found in the surrounding region are used in the construction of these structures.

The following images are cross-sectional models of the structures in the inflitration system.

This image is a conceptual model for combining a swale and a berm for the creation of an infiltration system. This is a cross section of the swale and it is shown located on a slope, with the run-off flow in the direction of the structure.

The following swale was designed by Dan Palmer for an arid climate and can be used as a guideline.[8] The measurements can be flexible and a length greater than 2m is recommended.

1. Swales should be constructed on contour to the landscape. Contour lines can be determined using an A-frame. When an A-frame is placed on the land, level ground is located when the string is in the center of the frame. You can use the A-frame to map level areas along the ground. Along the level point, place stakes as markers. At the end, you will have marked out a contour line.

2. As a rough guide, contour lines can be marked out 20 meters apart. Once the contours have been marked out decide how many swales to install. The swales should be placed down-gradient of areas that produce runoff such as roads. If there are no impervious surfaces in the area, the swales can be built at different levels along a slope or at lower elevations where more water will accumulate.

3. Once you have marked out the location of your swales, you can start digging. Swales are recommended to be at least 2 to 3 meters in length and 50 cm deep. When digging it is important not to compact the soil in the trench because this will reduce the infiltration capacity of the soil.

5. Use the excavated material to create a berm along the downhill side. This will help catch water in the swale during intense rainfall events. The core of the berm can be compacted while looser materials can be layered on top. The permeable layers will provide further runoff capture and infiltration while the impermeable core will prevent surface runoff from travelling further downhill.

6. Piling up stones or gravel along the uphill side of the berm will reduce erosion from water flows, especially if high water flows are going to occur during the wet season.

7. If desired, the area just downhill of the berm can be vegetated with seedlings, seed or sod. This will help prevent erosion and in the future, the vegetation may be able shade the swale and reduce evaporation. Infiltration from the swale will make the soils more suitable for plant life in areas down-gradient of its location.

It's recommended that materials from the surrounding area be used in the construction of the swales and berms. A basic swale does not have a cost because it only involves the digging of a trench and relocating the material into a berm next to the swale. Additional soil materials such as rocks and high permeability soils can be bought if they are not available in the area. Their cost will depend on a number of factors including the location of the swale. Vegetation can also be bought once the swale is constructed but price and type of plant will vary depending on geographical location.

The cost of a small dam structure using locally available materials is estimated at US$ 200-400 compared to a percolation pond structure that is estimated at US$ 5000 - 10000.[9] Swale construction can be physically demanding without the use of machines but it is very affordable and an efficient option for groundwater recharge.

Page data
Retrieved from "https://www.appropedia.org/w/index.php?title=Swale_Design_for_Watershed_Management&oldid=624016"
Cookies help us deliver our services. By using our services, you agree to our use of cookies.
Categories:
Maintenance categories:
Comments
Privacy policy · About Appropedia · Disclaimers · Mobile view · Content is available under CC-BY-SA-4.0 unless otherwise noted.
</html