From Appropedia
Redirected from Sunbrella 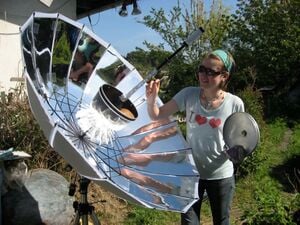 An umbrella by rain, a parabolic solar cooker by shine... a Sunbrella!

The energy used for conventional cooking comes from a variety of sources: wood, gas, oil, coal, electricity, etc. Though solar cooking seems to be its own category, it is the basis for all the rest. The Sun's energy powered the growth of the tree; plants and animals buried on the ocean floor a hundred million years ago anaerobically decomposed to produce crude oil[1]...

The difference between using conventional techniques, such as wood, oil, and gas, and using pure solar energy is the number of transfers the energy has to undergo (as well as the byproduct of usage, of course). To use gas, for instance, the Sun shines, the tree grows, the animal eats, the fungus feasts, the gas burns, and then the pot heats. To use pure solar energy, as with a Solar Cooker, the Sun shines… and then the pot heats. Simple, straight-forward, and seemingly much more efficient for the purpose of cooking food for human consumption.

Solar cookers are solar concentrators where precision and efficiency has been sacrificed for ease of construction and use of readily available materials. Inexact geometries that still allow for water boiling or bread baking temperatures are used. Some calculations relevant to the design of solar cookers with paraboloidal reflectors can be found on the Sun related calculations page.

There is a whole spectrum of Solar Cooker designs, each with their own unique costs, benefits, and optimal conditions. Some examples...

Parabolic reflectors [2] concentrate sunlight into a focal point. The more exact the shape, the tighter the focus. When a parabolic solar cooker is not aimed correctly, the focal point disperces, creating off-axis parabolic reflection. Thus, frequent adjusting of parabolic solar cookers must occur to keep the focus in place. This focus creates very high temperatures, ideal for areas like Humboldt County where the Sun is not very strong or direct [3].

As a student taking Appropriate Technology at Cal Poly Humboldt in the spring of 2009 with access to incredible human resources (Bart Orlando and Lonny Grafman), I couldn't imagine a better time or place for me to cooperatively design, build, test, and enjoy an umbrella solar cooker.

Amazing opportunities for growth present themselves at every angle of this project, fore I am able to…

This project was truly made possible by the one and only Bart Orlando. Bart is an appropriate technology visionary who, among many other things, converts commonly found items into solar cookers. He mentors and works with students in the Humboldt area to design and create innovative technologies such as the Parabolic Basket Solar Cooker for non-industrialized cultures and the Papasan Chair Solar Cooker for industrialized cultures. He is a teacher at heart and creates educational displays and demos everywhere he goes, from events and schools to farmers' markets and co-ops. His mission is to reduce the negative health and environmental impacts of using wood and other conventional methods of cooking and make solar cooking accessible to all… who cook food. ☺ Thank you, Bart, for your dedicated work, guidance, and friendship. More examples of A.T. projects Bart has envisioned can be seen online at Projects With Bart [4].

This project was inspired by another Sunbrella made in 2000. Thank you to all who document their work online!

An umbrella is a mighty appropriate tool in Humboldt County, as is a cooker that utilizes a clean renewable resource. Thus, we decided to combine the two to make an incredible apparatus: an umbrella in the rain, a solar cooker in the Sun... a Sunbrella!

The guidelines we used when designing the Sunbrella, as well as by which we judged our success, make up our criteria. You can also think of them as goals...

The frame is like the skeleton, it is what holds the parabolic shape of the cooker. Since our frame is an umbrella, we searched far and wide for one that had the right size, shape, and shaft.

After many weeks of searching the Humboldt region, we decided to purchase an umbrella off Ebay: a white, 60 inch diameter, 16 panels, and straight handle, and a 2.5 inch tip that extends from the shaft (so it is really strong). About a week before we were done, we found the perfect umbrella almost identical to this one except better because it is rainbow colored, silver shaft and ribs (instead of black), and has a higher focal point. You'll see pictures of both throughout this page.

The reflectors are what, as I'm sure you can guess, actually reflects the sun rays. There are many materials available on the market that have varying degrees of reflectivity, durability, price, and so on. A great reflector comparison table was made by another Engr 305 student in 2008. Ideally, a very high thread count cloth-like material, like liquid lame, would be permanently sewn onto the panels for ease of set-up. This material was not readily available but is out there*, so we instead decided to create individual reflectors that would slip onto the panels when being used as a cooker and stored when not. We settled with mylar and cellulose acetate.

The reflectors took a lot of time and energy to construct. We had to undergo several trial-and-errors to find the right size reflector -- it wasn't as easy as it seems. We found that the umbrella's panels could not be covered with isosceles triangle reflectors because of the curvature, which caused a gap between the reflectors in the middle when bowed to fit the curve. So, we decided to widen the angles of the triangle and allow one of the sides down by the most acute angle hang over into the next panel area.

The stand is the mount, or base, for the solar cooker. It is crucial that the stand be easily adjustable so the solar cooker can track the Sun with minimal disruption to the cooking process. The stand obviously must also be strong enough and well grounded to support the Sunbrella with food in it.

We brainstormed quite a few different designs for the stand, two of which we actually tried:

The cookware is what facilitates the cooking of the food, including a pot, it's base, and ideally a windshield (oh, and of course a mixer and a pot holder). Usually, parabolic solar cookers do not have a shaft running right through the focal point. This creates some challenges, but in turn enables creativity.

Since the umbrella does not always have to be a Sunbrella, convenient storage for the reflectors and other components would be nice. We decided to use a length of PVC piping with two end caps. We cut a wedge of foam to secure the umbrella inside the tube. The reflectors are simply wrapped in cloth and eased inside. More ideas have come up for the container, and can be found in the Further section.

Setting up the Sunbrella is amazingly simple, and only takes one person about 10 minutes! It's as easy as....

Once all the reflectors are in place, watch out for off-axis parabolic reflection. This scattering of light could hurt someone's eyes or possibly start a fire if the time is right and flameable materials are around. When not using the cooker, either face it 180 degrees off-axis, or cover with a sheet.

Now for the fun part! Experiment with baking, frying, sauteing... Check out some great solar cooking tips and recipes on the internet and in books for inspiration.

Be sure to always wear UV protective sunglasses when using the Sunbrella and have pot holders and towels handy while cooking. Also, keep an eye on how illuminated the pot is... parabolic solar cookers need to be adjusted every 15 minutes or so to keep an accurate focus on the Sun.

Turn the Sunbrella away from the Sun and undo what you just did... simple! Be sure to take care of the reflectors. Stack them together, leaving the cellulose acetate side up on both ends for protection, and wrap in cloth. Storing the Sunbrella in the container is pretty intuitive, but just in case you were wondering...

So, in the end, how well did we satisfy our criteria? Though I don't want to be making excuses, time constraints were the number one reason for hasty decisions that didn't necessarily fit our criteria... but we tried!

A project is never done, as there is always an infinite number of ways to improve and adapt a technology. We had fun dreaming up some of the possibilities to take the Sunbrella (as the Merry Pranksters put it) FURTHURRRR!!

Please add (and try!) your visions! 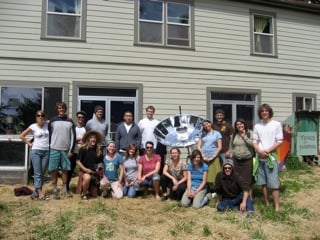 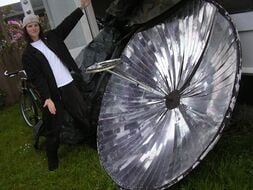 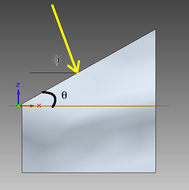 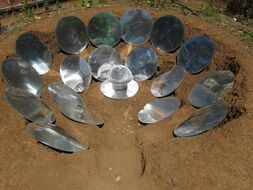 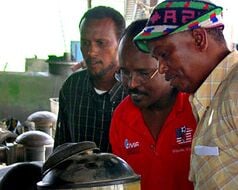 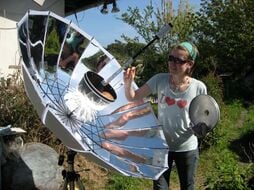 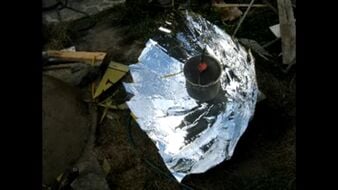 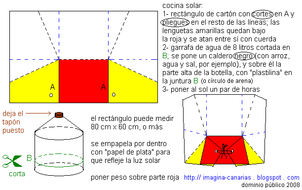 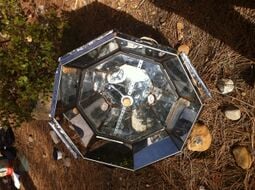 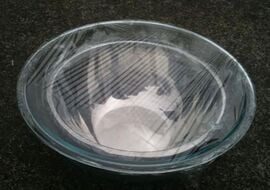 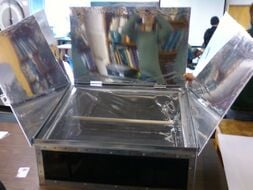 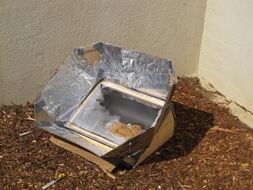 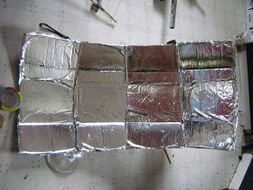 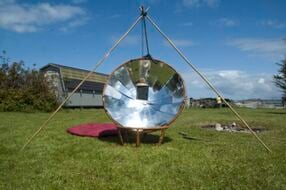 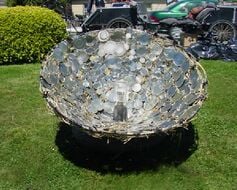 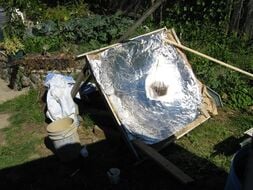