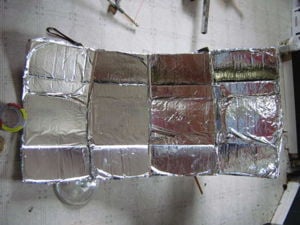 I now think that "compound" parabolic dishes have numerous advantages. (A compound parabolic solar cooker can also be made with the mathematician and I can add instructions later.) Use hardiplank, cardboard, plaster concrete or cob to make any size or shape parabolic reflector with this device! Solar cookers can be made from waste cardboard boxes covered with kitchen foil. Mostly people use math to figure out the parabola or use a template. Lots of mcguyver types are not into math and waste cardboard comes in all shapes and sizes with cuts all over the place so templates are not always suitable.. This method of making a solar cooker is suitable for a one off or assembly line and will work with ANY cardboard Box. Please try one and spread the word about this way of making parabolic cookers. I cook in dark glass containers and use an oven bag to reduce thermal heat loss. Currently, I use My cob solar cooker to sterilize soil. At 5 pm when i come home, my soil is still at about 60 C (after cooling down for about 3 hours!) And suitable for growing seedlings. I feel that this method of making solar cookers will prove very adaptable, very affordable and find use all across the world.

Parabolas are hard to make unless you have some fairly fancy math skills. But there is another way! The mechanical mathematician! This little genius solves the parabola for all points on the curve! Using some string to help him maintain a constant distance from the focus, to the curve, and vertically up to a horizontal line above the focus. The string is attached at the focus of the parabola and goes through a point on the parabola (on a piece of metal for hanging curtains) and ends up tied at the pipe joiner. There are many ways to make the mechanical mathematician, and the other one was used to make a cob solar cooker. Which works good. It was made from old metal chairs and junk!

This was a square box , it has 4 segments. I divided it lengthwise into 3 equal pieces using 2 lines (in yellow), I scribed them a little, cut with the sissors to extent the cuts to them and bent it over at the lines to mark the line bend into the cardboard. This gives 12 little same sized rectangles in the box. 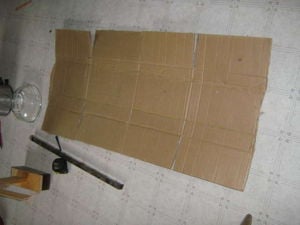 Each segment was 1 ft wide so I put 1ft kitchen foil across each segment and glued it. The glue mix was half Elmers glue and half water, mixed well and smeared lightly across the cardboard. I used a sponge to smooth on the foil. You start in the middle of a foil piece and sponge to the edges. It works well! 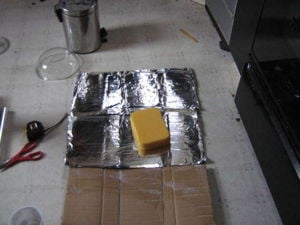 Gluing all done! Have a cup of tea. 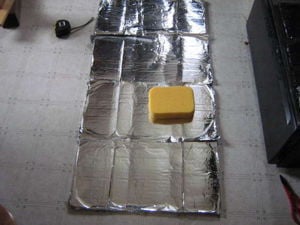 The mathematician can be made in many ways. Mine includes a piece of waste trim that is the slide bar at the top, a T-joiner for plastic pipes and a curtain rail that fit snugly into the T-Joiner. The string is strung from a hook on the central post at your favoured focal point, through a hole in the curtain rod and is tied on to the top of the T-Joiner. Some rules! The T-Joiner has to be at right angles to the slide bar which in turn must be at right angles to the central post. Directly under the hooks on the central post, there is a screw which goes down about a half inch through the bottom of the wood piece at the bottom of the post. And right under that screw, there is a hole in the dark piece of wood (just a little bigger than the screw). The dark piece of wood sits on the aluminum foil, screw goes in the hole and the top gadget can swivel around while the bottom piece stays in one spot. (This means less scuffing of the foil when the mathematician takes measurements!) 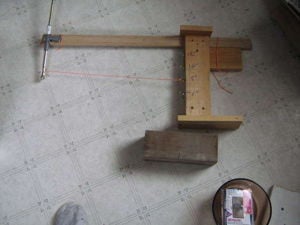 Step 6: Side view of the mathematician[edit | edit source]

This shows the slider bar is held in by a couple of screws, and the arangement of the string. It also shows the screw that the device swivels on. 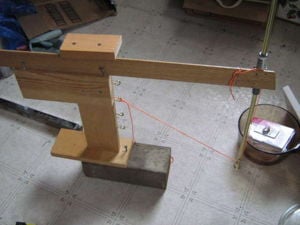 Step 7: Place the mathematician on the foiled cardboard[edit | edit source]

You should place the mathematician on the middle of the square of you solar cooker that you want to be bottom square. I then put a couple of marks on either side of the dark piece of wood in case it slips. I then put a little dot on the centres of all the other squares. 11 dots in my case. Next you must set the length of your string line. 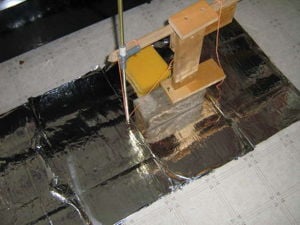 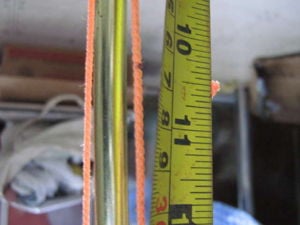 Now raise the curtain rail, and pull out the slider rail until it is right over one of the dots. raise the dot to the height of the bottom of the rail. (you may have to readjust a little). Prop something under it and apply the same procedure to the dot in the middle on the next segment. 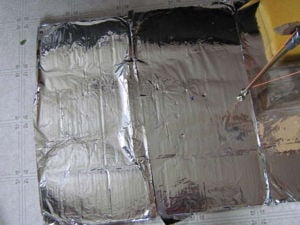 Same thing is done on the top, the dot in the middle is brought right to the bottom of the curtain rail. Here I supported it with my kitchen garbage can! and various pots and pans and jam jars!

Now the dots must be done on the outer pannels too so you swivel the mathematician around and raise the pannels until the curtain rail just touches the dot. Support and do the next one until they are all done.

Step 12: Tape up the backs of the panels so that they stay that way[edit | edit source]

If you wish you can place wooden supports under it too.

Your final product will have the focal length that you made. You can place and stick the cardboard from a toilet roll or something similar just under the focus to help you point it at the sun. Directly at means no shadows there. Generally, I place the food in a 9 inch glass or stoneware dish, put the lid on, and hang it in a metal hanging basket thing at the focus. I cover it all with an oven bag and clothespeg the top. If you want to make a tracking solar cooker, I suggest you move thecardboard cooker round the focus. The cooker is very light and there is no need to move the food too.

As you know, I made the cardboard parabolic pannel cooker. Previously I also made a larger parabolic cooker with cob. Saturday was beautiful and I was home nearly all day so I got some experimental results. I found the cardboard parabola difficult to set up correctly because it is not quite stiff enough. So it needs a spine to back up the cardboard. (Perhaps just one 1by 2 about 4 ft long with pieces attached to keep the middle cardboard segments exact. Results from the cardboard parabola heating up 1.2 liters of water in a black 0.9 kg teapot were as follows. (I turned the parabola to follow the sun)

(at this point the parabola was in partial shade and I stopped measuring) At 6.12 it was back down to 34 C in complete shade Measurement on the big cob parabolic oven went as follows. I did not turn the parabola but did move the pot a little to follow the focal point (There were 3.7 kg of wet soil in a 1.35 kg dark glass pot).

(I measured and the sun was coming in at about 50 degree angle at 4.05 so almost no heat being reflected!)

Conclusions The cardboard parabola was disappointing because it slightly lost its shape without a stiffening spine. so not correctly focussed on the pot. I didn't have an oven bag for that experiment and my plastic was too snug so energy was lost there too. Must have a spine to keep the parabola correctly alligned! The Cob parabola was a different story. As you can see it continued to heat up long after the sun had passed the best focus (I did move it to follow the focus). Even on less sunny days during the week when i came home from work, it was still at 55 C at 6.05 on sept 5th, at 61.5 at 5.26 the next day and at 61 C at 5.48 a day later. Why the slow continued heat up? Perhaps the heat migrates slowly up through the wet clay? Thermometer was in the middle of the pot so it probably took a while for the heat to get there.

I do not need more than 70C in wet soil to kill weed seeds so I can use a bigger pot for more efficiency. Perhaps twice as big! (volume wise) I get 3 gains, 1 bigger pot will stay in focus longer, has bigger volume to surface area ration so will retain heat longer and has bigger volume to pot weight ratio too so more heat usefully used. The parabola maintains focus on the pot much longer than I thought possible. 3rd conclusion. Tracking or deformed parabola or 2 parabolas would be much better! If the parabola was stretched along the line that the sun follows, it might maintain focus a lot longer. Or a simple tracking device to move a cardboard parabola round the focus. Or 2 parabolas! First parabola is for midday to 2 pm and is short focus. Second is to one side of it and is same surface area but longer focus about 20 inches (so it does not interfere with direct sun at 12. By 2;30, this parabola is starting to hit the pot pretty well. The additional effort to make this parabola with the mechanical mathematician would not be great but the benifit would be an extra hour or more of good heat.