The goal of this project is to provide rural communities with solar powered, low cost, high-speed internet access. Many communities do not have direct access to internet through DSL or cable lines. It will be very costly to install cable in these areas. As an alternative, we look to provide wire and cable-free access via satellite or cell phone plans. Solar energy will be used to power these networks, eliminating energy cost and drastically reducing the installation cost. Photovoltaic systems will last around 20 years with minor maintenance, leaving the residents to pay only the internet subscription fee. Details of how to size, plan and build a solar WiFi access point 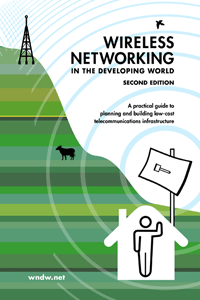 Wireless Networking in the Developing World is a free book about designing, implementing, and maintaining low-cost wireless networks. It applies in both the global North and the global South.

This book was started as the BookSprint project at the 2005 session of WSFII, in London, England. The aim is to provide the resources needed to build wireless networks that solve real communication problems. The website is wndw.net

The potential of successful PV mesh networks is based on five variables: system design and sizing, solar energy availability, economic analysis, and integrating geospatial information to optimize deployment locations. An example system was designed and built to assess the economic feasibility and overall system design. Utilizing PVSyst (refs) and ArcGIS (refs) technology, energy availability and demand was calculated for the system. Further analysis was done on the economic potential of the system compared to comparable technologies using previously published works (refs) and geographical referencing.

Locations of the study were chosen for their differences in solar energy availability and costs associated with Internet infrastructure implementation. Additionally, public or educational access to GIS data needed to be available. Therefore, the three locations chosen were in North America and compared townships in California, United States; Kentucky, United States; and Ontario, Canada. Each area has unique demographics, solar and infrastructure availability.

The following design methodology was created, employed and demonstrated in an example system. The system includes three units to demonstrate the mesh network and its functionality with one unit connected directly to a broadband source and the other two functioning as relays. It was decided that the system use ultracapacitors where possible to demonstrate their potential in such an application and the feasibility of implementing such a system. The sizing of the electronic components was determined using PVSyst. The associated converters and controllers were selected to optimize efficiency while minimizing cost and necessary components. Mechanical components including the structural elements, mounting hardware, and fasteners were selected based upon the following criteria: cost, weight, strength, component life, transportability, ease of use, and maintenance. The structural support system was designed to hold the solar array at the optimum angle for the latitude at which the system will be utilized. Using the design methodology, several example systems were built for testing.

Equipment list inclues: PV panel, ultracapacitor bank, router, converters, batteries, hardware - this will be based on either PVSyst or GRASS/rsun in ArcGIS.

Going with an autonomy of 1 day and a maximum Loss of Load of 5% we can arrive at the size of the system as follows:

The router chosen is a Cisco Linksys WRT54-- 6W. The Cisco router has specifications of: DOD=0.98, Efficiency=0.95, and an operating voltage of 9V.

The design of the mechanical components focused on simplicity and functionality. Material properties for each mechanical component were assessed to ensure all components could withstand the loading conditions including wind loads, rain loads, and snow loads (Messenger 2004). Each mechanical component was then sized using a factor of safety of 1.5. The frame is constructed from steel angle iron. A waterproof housing was employed to protect all necessary electronic components with size selected accordingly. This was done using a simple Rubber Maid container and waterproofing it with silicone glue on the seams. Wheels where incorporated into the frame for ease of transportation. A rack to hold the ultracapcitors in the waterproof housing was made using wood.

The implementation of the hardware is going to be made using DC/DC converters as shown in the schematic shown below.

The firing of the MOSFET’s is done using a Micro controller based circuit, it has been proposed to use the Arduino Uno to implement this circuit. The Perturb and Observe algorithm being considered to be used to implement the MPPT control [1].The advantage of this method is , it is easy to implement and robust in structure which increases the efficiency of the system.

The present cost of bringing broadband Internet access to rural areas was compared to the implementation of the designed PV mesh network. A Comparison of router configuration was also done in order to optimize energy demand, with system configuration and antenna spacing (Refs). Finally, a comparison was made between the use of standalone PV systems and connecting areas to electric grid in distance from current availability. In order to perform the economic analysis the cost of stacking standalone systems to a rural area from a WLAN hub , a comparison to the cost of extending electric and broadband infrastructure was made. The total cost of the system was calculated to include solar panels, inverter, batter bank, router, mounting, installation, and travel to rural areas (McLaughlin et al. 2010). Additionally, connection costs and WLAN hub was also included but varies with distance from land lines.

In order to assess various aspects of the PV system implementation, a geographical representation of the variables is necessary. Local level spatial disparities are necessary to assess to find places lacking infrastructure and technology for broadband access (Grubesic and Murray 2001).

Among the geo-processing capabilities of GIS perhaps the most useful is the overlay function. GIS has shown its usefulness in rural and urban planning, sustainable development, and identifying site specific locations (Refs). The different layers, including electric networks, broadband networks, and population density, can be synced to identify rural locations for technology dissemination. The mapping function of GIS, ArcGIS, was used to organize spatial variables to find cells, of resolution 0.5 km2, that is appropriate for standalone PV system installation. We computed the locations of remote sites for SA-PV installation from creating 6 layers incorporating buffers from the electric grid and broadband access at 500m, 1,000m, and >1,000m (Muselli et al. 1999). Additionally, a layer of population density is used to interpret potential market and impact.

The example system was tested using the following methodology. The system, comprised of three stand alone units, was placed outdoors with each branch unit roughly 500 meters from the main unit. The range and capacity of the mesh system was then measured. Finally, current and voltage readings for each unit was collected. Since the units were placed on rooftops, it was assumed that shading played a limited role and that systems were placed in an optimized location above shaded areas. Therefore, calculations regarding orientation and sizing due to shading parameters were ignored.