THE METHOD OF SMOKING AND STORING MEAT

by Melinda Stewart and Cleo Long

The salty, pungent odor of the smoking of meat from the green hickory wood lingers in the memories of many older people. These thoughts bring visions of the light brown meat hanging in rows from the rafters in the small, dark smokehouse ready to be taken into the house and slowly cooked as the children waited, mouth watering, anticipating the delights of the next meal.

Reading the butchering and smoking story in the Winter 1974 issue of BITTERSWEET reminded Cleo Long of her childhood when the day came in late fall for her family to butcher their hogs, and how her father, Noah Amos, was so particular with the fire the family tended in the smokehouse to smoke just right his family's yearly supply of meat. Early in the spring, she remembered, the family took a day to package the meat and store it in boxes with layers of ashes covering it.

Once a year the neighbors came in to help, and we'd butcher five or six hogs in one day. With the pork we made sausage and lard and also cured and smoked some of the meat.

After the ground up and seasoned meat set a few days, Mother and we girls fried the sausage in small patties, placed them in fruit jars, covered them with hot fresh lard and sealed them. By doing this they kept much longer than if they had been stored uncooked. Sometimes we stored them in two gallon stone jars, again covered with lard.

We always had three kinds of lard which we rendered separately. We canned the leaf lard in fruit jars and used it only for baking. We stored the fat from trimmings in lard cans. We used the fat from the intestines first because my parents thought it became rancid more quickly than other fat from the hog. We usually used it for frying donuts and other cooking and sweets. Lard made good gingerbread and delicious molasses cookies.

After we butchered the meat and cut it up into hams, shoulders, sides and jowls, we cured and smoked it. My father rubbed brown sugar on the meat first, rubbing it in real good with his hands, not on the rind part, but just on the raw meat part. Then he put the salt on the meat, leaving it on scaffolds several weeks to give the salt time to go into the meat.

We had to hang it in the smokehouse next. We had a brick-type smokehouse with a tin roof. A lot of people hung the hams and the shoulders from the lard side so that the grease wouldn't drip out as much. We didn't hang our meat that way. We hung our meat with the string in the hock of the ham and shoulder and hung it with the meat down. I suppose my parents didn't care if the grease did drip out.

We smoked the meat several weeks. We didn't keep a fire going constantly, because it was not good for the meat to have a fire burning in the smokehouse. I remember we did the smoking from the time we got home from school until we went to bed. Then my father worked at it some during the day. My sister and I tended the fire because my brothers were busy with chores and in the fields.

For the fire we used sticks and limbs which my father cut off the hickory trees and stripped the bark off. Basically, we used both dried and green wood. We used the dried wood to have something to get the fire started with, but my father liked the green wood. He usually went out and took the sticks off a tree because then he knew it was hickory. Otherwise, he didn't know whether or not it was hickory. Then he made these into a little fire like a campfire in a pan. We got it started burning and then smothered it with a piece of overalls or an old pan until it smoked. We used a second granite dishpan to turn over the fire at night to keep the fire from rekindling.

After the meat was smoked, we left it hanging in the smokehouse until late February or early March. Then the bugs would start to get bad and would get on the meat after it had been smoked. My father was careful to store the meat properly to assure good clean meat that was free of skipper bugs and other insects such as maggots from green flies. We had a hard time with the skippers. They were a black bug about a quarter of an inch long.

The process that my father used to store meat in boxes full of ashes was a bit unique, I think. Whether it is true or not, my father had the idea that the ashes helped keep the meat from tasting rancid before it was used. We went through this process on a clear sunny Saturday, so the children could be home and help.

We filled the forty gallon kettle with water, built a fire, erected a large scaffold and carried the meat from the smokehouse. While the water was heating, we carefully looked over each piece of meat to assure that there were no openings where bugs might be hiding, for if the bugs were sealed up in the meat, they'd eat on it all summer. When the water was boiling, we dipped each piece of meat into the water to scald it--just long enough to kill any bugs and their eggs.

My father placed the meat on the scaffold where the direct sun could dry it. Sometimes he used old feed sacks to blot the water off. The children were to see that no green flies were around.

When the meat was dry, he cut off the hocks for two reasons. The hock served as a trap for insects since there was a hole through it where it had been hung, making a hiding place for these bugs. Also cutting it off conserved space when storing the meat.

After that, we wrapped the meat in paper. I don't remember too much about the wrapping paper, but I know we had to save every newspaper that came to our home, storing them very carefully in a room upstairs so that they wouldn't get dirty. Today people will say that the newspaper wouldn't be good to wrap meat in, and now I question this practice because of the ink, but we used it, and we also used wrapping paper. Back in the days when I was a kid, we didn't get paper bags when we went to the grocery store. Food was wrapped in brown paper. We saved all of that paper because it was good for wrapping the meat.

After wrapping and tying the pieces of meat with string to hold the paper secure, we put them inside twenty-five pound paper flour bags that we had saved, or other paper bags that might have accumulated. Dad was happy when flour came in cloth bags. They were easier to tie than the paper.

My father had two large homemade wooden boxes, approximately thirty by fifty inches wide and about thirty inches deep which we had filled with wood ashes from the kitchen stove.

He was pretty particular about the ashes. The ashes from the kitchen range were finer than those from the wood heater because nothing was ever burned in the kitchen range but wood. We burned scrap lumber in the wood heater so there was junk like nails in the ashes from it. Ashes from wood heater also had charcoal. Of course, we did all the cooking on a wood stove, so we had plenty of ashes. We had to pour them in a bucket to let them cool till we were sure there was no possibility of fire before storing them in boxes.

He removed most of the ashes from the box to a tub, leaving a two inch layer of ashes in the bottom. He began by placing a layer of meat on top of the ashes and completely covering it with ashes. Then he added another layer of meat covering it with more ashes until the box was full. Of course, there was no way that any ashes could get on the meat because it was wrapped in paper.

He knew where every piece went in the boxes. He had the hams and shoulders in one box and the bacon and jowls in another. This way it was not difficult for us to find the desired meat when we wanted it. When the box was full, he covered it with a frame made of screen wire to keep any mice or rats from entering because on a farm, it's awfully hard to keep mice and rats down.

When we removed the meat, the sack was greasy, so we carefully removed and discarded it and the wrapping paper. When we emptied the boxes after using all the meat, we cleaned and aired them and then started saving ashes again.

Pickling was a method used by my grandparents and some by my parents to preserve meat if we butchered in the summer. We butchered small hogs for summer use since the pork had to be canned, pickled or eaten right away because it would spoil in the hot weather without refrigeration. We filled a twenty gallon stone jar with brine, which is water with enough salt to float an egg. Cut up into five inch chunks, we could keep a whole hog stored in the brine until we could use it. Then soaking the meat in cold water before cooking removed the salt, but if it was cooked with beans, it did not require too much soaking. If the brine was correct, this meat would keep several weeks, although in our family it didn't last that long because there were eight children and hired hands to eat it up. We always shared with neighbors, too. Pickled meat also provided a variety on the dinner table. This was very delicious rolled in flour and fried.

My. parents also preserved squirrels and young rabbits with salt for a short time until the family could use them.

After taking so much time and effort to preserve the meat, the family thoroughly enjoyed all the different cuts. Even the same cuts of meat cured and smoked by different people had their own individual taste because of different methods used, type of salt used, whether sugar was used, and because of varying lengths of smoking time and the care each person took to make sure the fire didn't blaze and the wood used for smoking was right.

Nothing reminds many Ozarkians of their childhood homes faster than the aroma of hickory smoked meat. "All the meat tasted good," Cleo said. "When you worked hard, the meat really tasted good when you returned to the house for a meal." 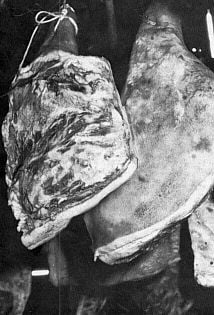 Usually the little smokehouses common on many Ozarkians farms were filled with smoked hams, bacon and shoulders. "My father smoked one hog for each family member," Cleo Long explained. "Then we butchered two hogs for gifts. They were a welcome gift to our family doctor and our preacher as well as to relatives and friends who did not cure meat." Photo by Ruth Massey.

Page data
Retrieved from "https://www.appropedia.org/w/index.php?title=Smoking_Meat&oldid=601046"
Cookies help us deliver our services. By using our services, you agree to our use of cookies.
Categories:
About Appropedia · Policies · Contact · Content is available under CC-BY-SA-4.0 unless otherwise noted.