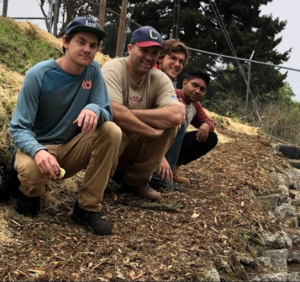 Six Rivers Charter High School (abbrev. Six Rivers) in Arcata, California has a garden and outdoor learning space located at the bottom of a hill below the main classrooms. The staircase originally connecting the space to the rest of the school had fallen deep into disrepair and sorely needed to be replaced this year (Fall 2019). The team spent a few weeks researching pathway and stair design, slope stabilization, retaining walls, pathway construction, erosion control, and native plants before meeting with Six Rivers' Principal Ron Perry to establish their personal criteria for the design. The team was tasked with designing a pathway that is safe, wheelbarrow accessible, widely plantable, cost effective, ecologically sound and aesthetically pleasing. The primary objective of our design was on functionality and durability.

The top priorities for any trail/pathway are safety and accessibility, and the importance of other criteria is situation specific. For this project labor intensity and cost are very important because without prioritizing these the project may not have been able to reach completion in time. Remaining criteria is valued with respect to education.

The first prototype was constructed out of drywall compound, chicken wire, and magazines on a plywood frame. The clam-shell cement blocks are represented by the colorful foam blocks, the urbanite retaining wall is represented by the black foam blocks, and the compact earth tire wall is represented by the slices of wine cork. The first problem posed was the sharp inside angle of the switchback. The fact that this would present an issue was confirmed by the second prototype which involved carving into the construction site. As a result of the prototyping process, the team chose to extend the landing section of the trail farther back into the hillside to allow for a gentler inside angle on the switchback. The prototype was tested by showing it to Cal Poly Humboldt engineering students who gave their opinions of what could be improved on and what could be potentially problematic or unsafe.

The final design shown below addresses the client criteria and insight gained through the prototyping process. The full length of the pathway is approximately 90' and the area of the landing is approximately 35 square feet. The bottom of the pathway to the landing is supported by a 66' urbanite retaining wall that expands upon a pre-existing concrete block retaining wall. The landing is supported by a compact earth tire retaining wall measuring approximately 54" high by 13' wide, and comprised of 24 tires arranged hexagonally. The portion of the pathway between the top and the landing does not require reinforcement. The pathway surface is composed of three layers: tamped earth as the base, a mixture of sand and gravel in the middle, and mulch on top. Outsloping of the pathway and Coweeta dips were used for drainage, and a combination of ripraps, straw, and grass seed were utilized as temporary erosion control for remaining bare slopes. All elements of the design were produced as planned to the satisfaction of the team as well as the client. 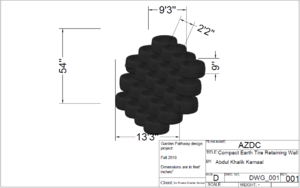 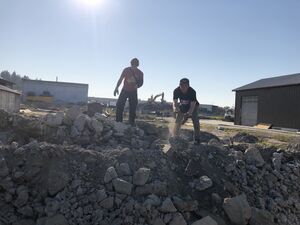 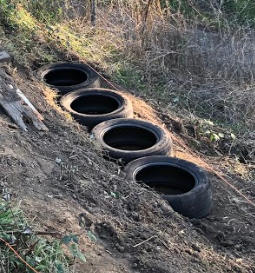 Prepare the wall site by leveling and tamping down the soil where the first row of tires will be placed.
3 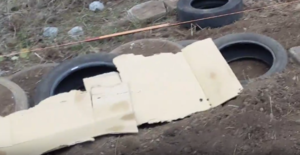 Place the first row of tires neatly in a line and use a level to flatten them as evenly as possible. Place cardboard inside tire to cover the bottom hole. This prevents dirt from spilling out through the bottom as it is filled. The photo to the left demonstrates measuring the cardboard to be cut before it is inserted into the tire.
4 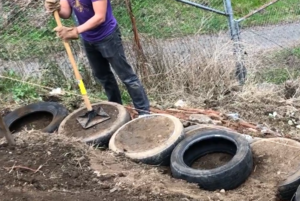 Pack the first row! It is most efficient to have one person shoveling scoops of earth into the tire while one person packs it using a tamper, sledge hammer, or similar tool. If the local soil is particularly dry it is best to lightly dampen the soil to help it bind to itself.
Note 1: Minimize plant/organic matter from mixing into the soil. Organic matter will decompose over time and this can cause the fill to shrink which could compromise the strength of the tire.
Note 2: Be sure to pack in the sides of the tire. As you fill the tire it will be come increasingly difficult to compact the sides so a handheld sledge is recommended for this.
5 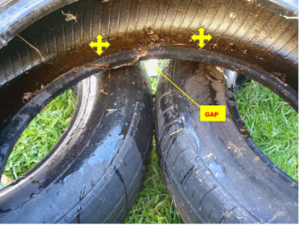 Place the second row of tires, staggering them such that they line up as in the photos for steps 5 and 6, and leveling them to be flat.
6 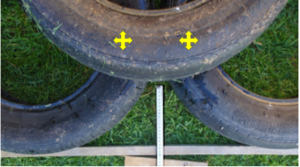 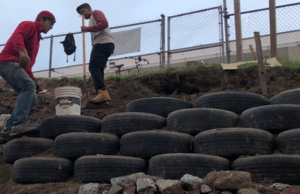 Repeat the steps taken to produce the second row of tires and repeat until the final row has been finished.
9

Optional: Use your tires as planters by shallowly digging into them. The tires function well as planters and roots will add additional strength, but digging too deeply into them can compromise the strength of the soil that has been packed in. Placing above ground bottomless planters on the center hole of a tire is the recommended method.

The urbanite retaining wall described below is constructed from recycled concrete. Pieces of concrete with one flat side such as those sourced from old sidewalk are ideal, but not critical. This type of retaining wall is known as a gravity wall because it does not have anything anchoring the wall to solid ground. The strength and stability of this design is rooted in it's sheer weight, so it is important to remember that the sum mass of urbanite used is proportionate to the overall strength of the wall. 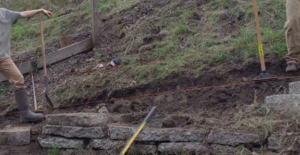 Determine where your retaining wall will lay and mark it's path with string.
2
Create a foundation layer by digging out all loose dirt, tamping firm the earth that your first layer of urbanite will be placed on, and level it.
3

Moving along the string, set another piece of urbanite next to the first piece, nestling them together such that the edges "lock" into place.
5 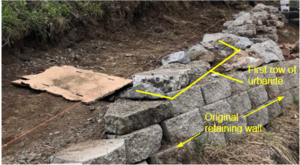 Fill in gaps between the blocks using a combination of soil and gravel. Massage the fill into place using tools before packing it in firmly so that fill can reach the most inner spaces.
6
Repeat steps 4 and 5 until the first layer is complete.
Note: It is highly recommended that each block be firmly stabilized before moving on to subsequent blocks, rather than completing the entire row and returning to check stability of individual blocks afterwards. Check each block's stability by tapping it with your foot. If it wiggles in place then it has not been set firmly enough and must either have additional side/backfilling, or increased lateral support by adjusting the placement of adjacent blocks. This is difficult to do once the entire row is complete because adjusting the placement of any one piece will alter the placement of the blocks touching the one being adjusted.
7 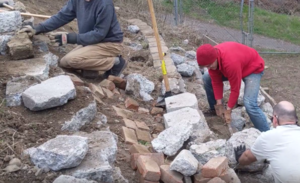 Once the first row is firmly placed and stabilized, place the second row just as you did in steps 4 and 5. Use the heaviest blocks available.
8

Create as many rows as your project calls for, always checking for and addressing points of instability.
Note: Optional measures for additional securing of blocks such mortar, cobb filler, and newly poured cement can be used, but are not critical to the structure. 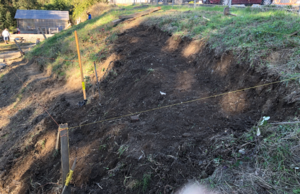 Layout trail with string and / or ruff digging.
3 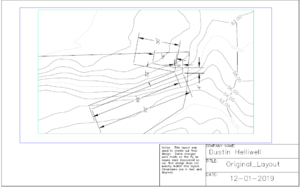 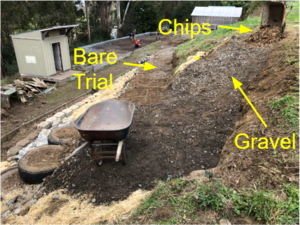 Backpack frame bike trailer
Armor the trail with a hard material such as gravel.
2 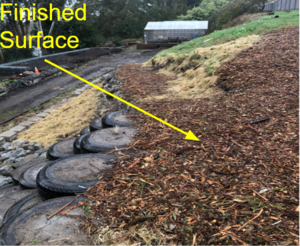 This section details the known and anticipated maintenance that this design will require to remain functional and cosmetically intact. It is designed with the intent of being maintained by the students alone.

Team AZDC recommends the following as future changes to the project:

About the Team[edit | edit source]

Page data
Retrieved from "https://www.appropedia.org/w/index.php?title=Six_Rivers_Charter_School_garden_pathway&oldid=631175"
Cookies help us deliver our services. By using our services, you agree to our use of cookies.
Categories:
About Appropedia · Policies · Contact · Content is available under CC-BY-SA-4.0 unless otherwise noted.