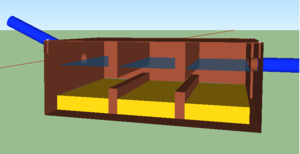 A septic tank is a tank allowing feces to decompose using the already present microorganisms. Two types can be distinguished:

The basic idea of flush toilets combined with a septic tank hooked up to a drain field is to provide a small system with primary sewage treatment. Sludge settles to the bottom of the septic tank, is partially reduced by anaerobic digestion, and fluid is dispersed in the leach field. The leach field is usually under a yard growing grass. Septic tanks can operate entirely by gravity, and if well managed, are reasonably safe. However, septic tank effluent has a very high Biological Oxygen Demand (BOD) which is harmful to soil fauna, as high BOD liquids strip oxygen out of the soil. Non electric sewage treatment plants are a far more sustainable option and do not pollute groundwater.

Septic tanks have to be pumped periodically by a honey wagon to eliminate non reducing solids. Failure to pump a septic tank can cause a high level of solids in the overflow liquid that damages the leach field, and contaminates ground water. Septic tanks may also require some lifestyle changes, such as not using garbage disposals, minimizing fluids flushed into the tank, and minimizing nondigestible solids flushed into the tank. For example, septic safe toilet paper is recommended.

Care must be taken as to the products that are allowed to enter the drains. All septic tanks rely on a colony of anerobic bacteria to reduce the volume of organic matter in the sewage. Any product that is anti-bacterial should not enter the tank. These products include anti-bacterial cleaning products, bleach, toilet blocks, disinfectants, etc. Also, certain medications, antibiotics, etc. affect them as they pass through in urine.

The basic design is a big concrete box, buried in the back yard, and connect to all all the house's toilets and sink drain lines (mounted on the front of it). A few hundred feet of perforated drain pipe are layed in shallow channels and the channels are filled with gravel. Everything is covered with topsoil. If you really want to you can dump some special 'septic tank bacteria' in it once in a while, or have it pumped out once a year. Most people ignore it - at least until it stops working.

If it stops working you have to pump it all out, possibly even dig up the whole system and replace the field pipe, the tank, the lines, or everything. It is not exactly high technology, and it requires a bit of room (you couldn't have 60 septic fields for sixty houses in a 20 acre subdivision). You can't put them in where the water table is too close to the surface, or too near a stream/pond. I wouldn't call it wasteful. Some would like to make use of the methane generated, or the heat, or the composted solids. Others are happy enough to see it not get dumped into the local ground water.

In colder countries, (as well as being insulated), heating is mostly provided on the tank, ie through heating wires. These increase the temperature either constantly or at times of the year when it is too cold for the anaerobic digestion to work. The temperature range in which the tank needs to be kept is between 7°C and 35°C.

Many septic tanks are now manufactured with GRP(Glass Reinforced Plastic). Along with newer technology and simpler design. These tanks are generally used on newer builds and rural applications, as they need some sort of technical installation which ends up quite costly.

This technology is generally used where sewers have not been connected, as sewers are more reliable and can present less public health problems.

However, in the UK, the sewage and water industry caused 19% of serious (category 1 and 2) water pollution incidents in 2007. Between 2004 and 2008, water companies in England and Wales were prosecuted 342 times for serious pollution offences, according to the UK Environment Agency. In many developed counties, Decentralization of sewage treatment plants (DEWATS) is being adopted for new 'ECO' towns to combat this problem.

In the developed world, this technology used to be used in remote areas; in poorer communities in the developing world, some form of septic tank may be the standard, even in high density settlements and increasingly, where DEWATS is adopted.

In the UK, septic tank installations are prohibited in many areas now, under the Environment Agency's 'General Binding Rules' January 15th, 2015. Any properties that are within a Groundwater Source Prtoection Zone 1 cannot discharge sewage effluent to ground and sewage treatment plants, with discharge to a watercourse, must be installed instead.

In Indonesia, the term septic tank - tenki septik - is used to describe a very standard method of sewage disposal, which is more basic than the septic tank used in developed countries. It is simply a ring of concrete, in a hole, with an unsealed (i.e. earth) bottom. Thus raw sewage is in direct contact with the earth. Where groundwater comes near the surface (for example Surabaya in East Java) this contributes to serious water contamination problems. This crude method is also used in rural Spain, where the tanks are calle 'Posso Negro's', or 'Black holes'.

In Indonesia, catfish are sometimes used in septic tanks, as they eat the sewage. See Sewage treatment using catfish.