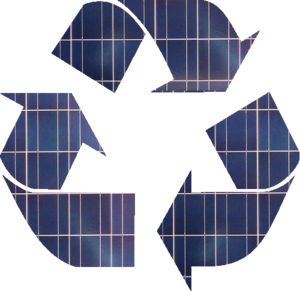 Rapid expansion of the solar photovoltaic (PV) industry is quickly causing solar to play a growing importance in the energy mix of the world. Over the full life cycle, although to a smaller degree than traditional energy sources, PV also creates solid waste. This paper examines the potential need for PV recycling policies by analyzing existing recycling protocols for the five major types of commercialized PV materials. The amount of recoverable semiconductor material and glass in a 1 m2 area solar module for the five types of cells is quantified both physically and the profit potential of recycling is determined. The cost of landfill disposal of the whole solar module, including the glass and semiconductor was also determined for each type of solar module. It was found that the economic motivation to recycle most PV modules is unfavorable without appropriate policies. Results are discussed on the need to regulate for appropriate energy and environmental policy in the PV manufacturing industry particularly for PV containing hazardous materials. The results demonstrate the need to encourage producer responsibility not only in the PV manufacturing sector but also in the entire energy industry.

Cost of Recycling vs. Cost of Landfilling[edit | edit source]

It was determined that the cost of disposal for CIGS, c-Si, p-Si and a-Si were between $0.5 to $0.9 per module. However, because CdTe modules contain Cadmium, which is considered a hazardous material, the disposal cost of these modules was much higher, $6.45 per module. Additionally, the profitability of recycling the five types of solar modules was found, and except for CIGS modules, there was no profit that arose from recycling. Consequently, this makes landfilling a more attractive choice for disposal.

Because it was determined that there is little economic motivation to recycling solar modules, and given the toxicity of some materials in solar modules, it is suggested that policies be developed to ensure solar modules are recycled at the end of their life. One approach to developing these policies is to establish producer responsibility among PV manufacturers.

'Unlike the environmental failures seen in the geriatric fossil fuel industry, the photovoltaic industry is solving potential problems before they occur,' adds Joshua Pearce of Michigan Technological University in Houghton, US. 'With this kind of progress, the potential for a low-cost, solar-powered future looks pretty bright.'

Page data
Retrieved from "https://www.appropedia.org/w/index.php?title=Producer_responsibility_and_recycling_solar_photovoltaic_modules&oldid=619698"
Cookies help us deliver our services. By using our services, you agree to our use of cookies.
Categories:
Maintenance categories:
Comments
Privacy policy · About Appropedia · Disclaimers · Mobile view · Content is available under CC-BY-SA-4.0 unless otherwise noted.
</html