Story and drawings by Nancy Honssinger

If you walked into a schoolroom seventy-five years ago you would probably have seen a very common sight, small children, heads bent over their papers, struggling to form the letters of the alphabet correctly. The teacher would have kept an eagle-eye on her pupils, watching their posture and the rolling motions of their arms as they practiced. When a pupil made a mistake she was always there to guide their hands back to the correct position.

Today's typewriters and photocopiers have minimized the importance of penmanship. Years ago a person's handwriting was an important factor in his successful completion of schooling and also in his opportunity to obtain a good job. When letters, passages from books, or documents had to be transcribed by hand it was very important that the finished product was legible. It couldn't be just a page of scribbles and scrawls. The printed word has now almost exclusively replaced cursive writing, but old-timers, skilled in the art of penmanship, regard a typewritten personal letter as a sure admission that the correspondent's handwriting just isn't what it ought to be.

There are still people here in the Ozarks region who are able to write in this beautiful, but fast disappearing style. One of them is Dorothy McMicken. We recently paid her a visit so that she could show us the basic fundamentals of early script writing. Dorothy's penmanship is as beautiful today, as it was when she was nineteen, and first learned to write with this method. Friends in the community still bring documents for her to sign for them and marvel at her flowing handwriting.

Dorothy explained to us that after school, and on quiet Sunday afternoons, pupils spent many hours painstakingly practicing the alphabet and other penmanship exercises. Name cards and autograph books were two fads of the day, and a young person worked toward becoming proficient enough to make the flourishes and curlicues that would add uniqueness and elegance to his handwriting. Also, since a person's signature on a document was considered a mark of distinction, great pains were taken to develop an artistic and original one.

An example of an old-fashioned name card.

A person didn't need many supplies to become an expert at penmanship, but a few purchases were necessary before he could begin. A pen and a bottle of ink were essential tools. When early penmanship was first practiced people used pen holders with different tips. Most preferred a fine-line straight tip. Now regular fine-point ball points or fountain pens are used.

Ink came in small bottles, and black was usually preferred, although blue was sometimes used. Other colors were purchased to use on special occasions.

Practice paper for exercises was usually lined, or ruled similar to our preschool tablets today. When the pupil had made satisfactory progress he graduated to regular smooth white paper rather than paper with a rough finish. Smooth finished paper was much easier to write on because a rough finish caused the pen point to pick or scratch the paper and ink would blob. Teachers recommended a hard work surface when ornamental penmanship was practiced because it made writing easier.

Manufacturers of kits, designed to help the average person improve his penmanship, advertised their products in magazines and newspapers then, just as various how-to-improve-yourself products are advertised today. The kit contained a pen with a variety of points, possibly ink, practice paper, instruction book, and sunken copies of writing with a tracer pen. Sunken copies were made of heavy cardboard with the letters deeply imprinted into them. The poor penman could trace the letters over and over to learn to form his own letters correctly.

By now your curiosity about ornamental penmanship may be aroused enough that you're wondering whether you just might not be able to learn how to write like this yourself.

To get a feel of this kind of script, let's imagine that You're a student at the turn of the century, eager to learn and put into practice this artistic form of writing. First, you had to learn how to sit and move correctly. You always sat at a sturdy table, in an upright position on your chair, with your feet on the floor. You were careful to have good posture in order to prevent fatigue, eye strain, or poor circulation. You practiced making easy rolling motions with your arm, avoiding any finger movement. Most teachers suggested that you should never keep practicing when you became fatigued, but should wait until you had rested sufficiently to begin again. Two hours' practice a day was considered best for a beginning student, and to keep improving your penmanship you needed to keep practicing every day.

You placed your writing paper on a hard surface at a slant that was comfortable for you. Since teachers felt the best writing was done with the paper directly in front of the center of the body, it was sometimes necessary to stop writing and move the paper to the left or right to bring it into the proper body position. If you conformed to this placement, you would develop a uniform individual slant. The table you practiced on had to be just the right size to maintain good paper position and arm movement. 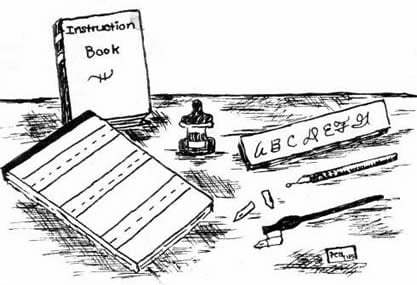 As important as posture, and the size of the desk were, they weren't nearly as significant as how you held your pen. This was the most crucial point of good ornamental penmanship. To hold the pen correctly you rested your finger on the pen holder with all the finger joints curved upward. The holder rested just back of your large knuckle joint. The pen couldn't be allowed to drop down on the thumb, so the end of your second finger had to come just under the pen holder. The joint of your thumb turned outward, and the end of your thumb was held just behind the end of your first finger. You couldn't grasp the pen too firmly or the muscles of your forearm would tighten and produce cramped writing. While one of your hands gripped the pen, the other rested on the opposite side of your paper, to keep the page at the correct slant. 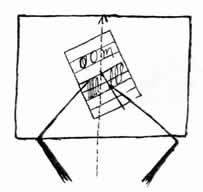 Ranking next to how you held your pen was your arm motion. Smooth rolling arm motions were necessary to obtain flowing penmanship. Your wrist couldn't be flat because this caused an unnatural twist in the forearm. It had to be turned, or inclined slightly toward the right, so that the pen holder, when you held it up near the large knuckle joint, would point over the part of the arm between the elbow and shoulder. When you held the pen this way it was in your direct line of vision, and you didn't have to move your head to see it. Your arms rested on the desk with the elbows at the edge of the desk. Your fingers turned back under your hand so that your nails could glide forward and backward as far as the flesh or muscle, on the underside of your arm would stretch. Your arm could move quickly and easily in this position. 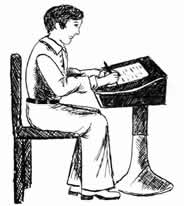 Front and back views of the right hand showing correct positions.

When you began to practice you had to take special precautions with your pen and ink. To keep the ink from blobbing on the paper you immersed the pen tip in the ink only slightly. Then you brushed the tip against the edge of the jar to let the excess ink run back into the jar. Pen tips didn't hold a large quantity of ink and needed to be dipped back into the bottle frequently to keep the pen flowing smoothly. 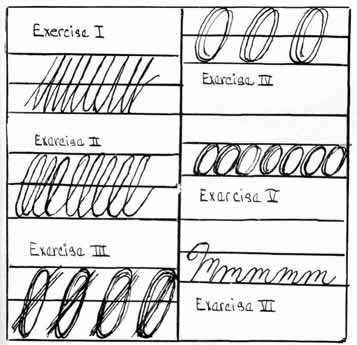 These penmanship exercises should be practiced at least ten minutes before proceeding to the alphabet, letters, and paragraphs. The loop and spiral exercises help you form your letters correctly. Ordinary lined practice paper should be used for the exercises.

After you had perfected regular letters you began practicing on capitals. The capital letters were a little larger than the small letters and were usually very curved and ornate. When you wrote a whole word, or perhaps even a sentence, you would go back to shade in letters in the appropriate places. This shadowing, plus flourishes and other decorative embellishments, made each person's correspondence interesting as well as beautiful.

So far we've discussed what you would have done if you had been a penmanship pupil many years ago. Why think of this in the past? You can still learn to do this today. All you need is to bring all these instructions into the present and begin to work. 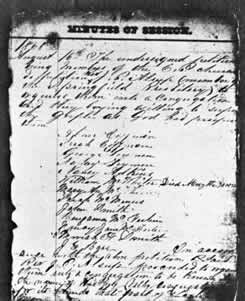 These "Minutes of Session," written in early script writing hang on a plaque in White Oak Pond Cumberland Presbyterian Church.

To begin to learn this script you should practice some of the exercises shown. After practicing these, concentrate on each letter of the alphabet to get the correct form and slant. Then you may begin to practice the capitals as shown on the chart. Practice these over and over until you can make them in one flowing motion. In early script writing there wasn't a break, or pause between letters as there is today. The writing flowed along and was all connected. From letters you can proceed to whole sentences. But each time you practice you should go back and repeat the penmanship exercises first, as sort of a warm up before you go on to the letters, words and sentences.

There are very few masters of the early script writing left today, in fact there are few masters of regular penmanship, but beautiful penmanship needn't become a dying art. Just as Dorothy and pupils did seventy-five years ago you too can begin learning the secret of flowing script. With a little practice you can begin to take pride in your penmanship just as your parents and grandparents did before you.