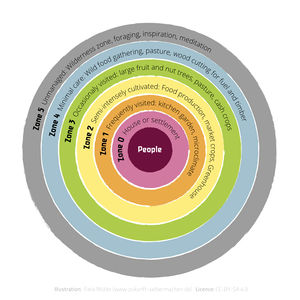 Zoning is an important part of permaculture design. It helps to arrange all elements in a system by the level of care needed and their interrelations. In a well designed system the user has to put very little effort into maintenance.
Page data

In most of the permaculture literature zones are applied to rural and suburban landscapes. However, in city landscapes there are often little to no areas with minimal human interaction. Thus zone analysis has been expanded to apply to urban contexts.[1]

The zone system as first outlined by Mollison and Holmgren did not distinguish between the inside of the house and it's immediate surroundings. As more people living in temperate climates became permaculture practitioners, they split off the inside of the house into Zone 0. Some permaculturists have even added a Zone 00, the self, as an attempt to place people at the heart of the system. Others have also included Zone 6 indicating the wider world in which a permaculture system must exist. Toby Hemenway has argued that the term "zone 00" is inconsistent with the rest of the zones, which refer to physical, immobile locations, whereas zone 00 refers to intangible abstractions.[2]