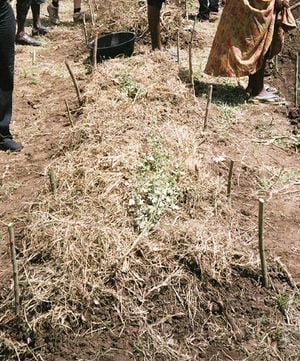 A double dug bed is planted and then mulched. This aids healthy plant growth, and reduces risk from pests

Mulching is the act of applying a layer of material, usually natural, on the ground surface, around growing plants. It prevents the growth of weeds and the loss of moisture. Average thickness is 5-7cm of mulch. It encourages the activity of earthworms and keeps the soil from becoming hard. In the long term it breaks down and forms humus and nutrients.

Closely related to mulch is the use of cover crops, i.e. crops that grow relatively close to the ground and prevent weeds emerging.

With mulching, organic matter is applied in thin layers between the plants. The application of a mulch layer can only happen when the seedlings have grown well above the soil or if the plants are planted. Sowing or planting in a mulch layer is an inefficient task. Do not apply the mulch layer near frost sensitive plants before half May. By covering the soil, it will not be able to radiate heat at cold nights, so the danger of frost damage is then greater.

Very thick mulch can be very effective, without harming the plants.[verification needed] deep enough that you have to dig a bit to find what's underneath, e.g. 10cm/4in or more.

Mulching also poses some dangers as it also closes off the soil, so the temperature is lower at night; more risk of nighttime frost (temperate climate countries).[verification needed]

Weeds have to fight to get through such thick mulch, and often fail. If they do make it through, they can be easily pulled out of the loose, moist soil that develops beneath the mulch.

Pull out big weeds before mulching. Or, for a lazy gardening approach, try tramping them down - this assumes you're ok with coming back to pull them out later, if they don't stay stay down - but the soil should have softened and it will usually be much easier.

Weed inhibiting crops cover the soil off completely or are spaced so far apart that we can properly hoe between it. Weed promoters do not have these qualities (eg garlic and chive).[clarification needed]

Mulch is an important component of lazy gardening, as it greatly reduces the need for most of the regular garden tasks such as watering, digging and weeding.

We can use Organic mulch:

Lay down at least 5" thick of mulch that does not have weed seeds in it such as straw. Mulch can be put around transplants or over plants like garlic, onions, and potatoes.

We can also use Plastic mulch:

Lay down plastic and plant in poked holes. Some problems are that plastic breaks down quickly, makes a lot of trash, and blocks water.

Finally we can have parts of the field (between crops) irrigated poorly For areas with long dry seasons bury your drip irrigation tape and irrigate only where needed.

Many materials can be used as mulch, including: