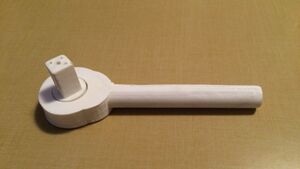 The ratchet is a fairly common tool in today's world. A major advantage of a ratchet is that many tool attachments can be put on the ratchet to perform many different functions. One issue with the ratchet though is that it can oftentimes be very costly to buy one. A printable ratchet could drastically reduce the cost for those in need of tools, such as third world countries. Additionally, the ratchet gives the option of being able to cheaply print any tool attachment that is needed, instead of having to pay for the many different kinds of tools that are available. For this project I used Blender to create each part.