Nuclear energy or nuclear power is produced in nuclear power plants using heat generated from a nuclear reaction (often nuclear fission) in a contained environment to convert water to steam. This powers generators to produce electricity. Besides nuclear fission, nuclear fusion is another technique which, however, is not yet being used to generate electricity for the mainstream consumers.

Nuclear power plants operate in most states of the US, in Japan, and across Europe. They produce about 20 percent of the USA's power. Nearly 3 million Americans live within 10 miles (16 km) of an operating nuclear power plant. According to the most recent review article on the sustainability of nuclear power -- as currently practiced in the U.S., nuclear power generated from nuclear fission is not a sustainable energy source.[1]

Nuclear power is a type of nuclear technology involving the controlled use of a nuclear reaction (ie nuclear fission) to release energy for work including propulsion, heat, chemical processes, pressure exchange, and the generation of electricity.

Nuclear power production makes use of nuclear fissionW reactions that release the binding energyW of uraniumW atoms. In order to be used in the nuclear fuel cycle, uranium 235, which is found in natural uranium, must be concentrated. The primary type of nuclear power system used is a boiling water reactor.W

"Too cheap to meter"[edit | edit source]

"Our children will enjoy in their homes electrical energy too cheap to meter," he declared. ... "It is not too much to expect that our children will know of great periodic regional famines in the world only as matters of history, will travel effortlessly over the seas and under them and through the air with a minimum of danger and at great speeds, and will experience a lifespan far longer than ours, as disease yields and man comes to understand what causes him to age." Lewis L. Strauss Speech to the National Association of Science Writers, New York City, September 16th, 1954 [New York Times, September 17, 1954].[2]

This was the view of Lewis L. Strauss, chairman of the Atomic Energy Commission. This vision didn't happen for reasons such as each plant having to be tailored to fit the need of the surrounding area. New regulations (e.g. for reasons of safety) put constrains on construction. This hiked up costs of building.

Recent publications from the U.S. Energy Information Administration [3] state that nuclear power is expected to remain one of the more expensive energy sources for electrical power generation as the cost of conventional renewables falls.

The UK government in 2010 declared that it would allow additional nuclear plants to be built, but would not support them through subsidies - this included a refusal to act as an insurer of last resort. This may effectively kill nuclear power as an option in Britain, especially considering the likelihood of increased insurance costs after the disaster in Japan in March 2011.

Nuclear energy is potentially low carbon energy, but many important questions need to be answered before claims of safe nuclear power can be made:

Power generated from nuclear fission is not a sustainable energy source.[12]

The potential liability from a nuclear accident/terrorist attack/natural disaster is so great that no nuclear power plant could be built if the owner had to pay for the full cost of liability insurance. Currently in the U.S. the liability is limited on liability for nuclear power plants under the Price Anderson Act (PAA). As former U.S. Vice-President Dick Cheney made clear when he was asked in 2001 whether the PAA should be renewed; he was quick to respond that without the PAA "nobody's going to invest in nuclear power plants". The U.S. Nuclear Regulatory Commission (USNRC) concluded the liability limits provided by nuclear insurance were significant as to constitute a subsidy, but a quantification of the amount was not attempted.[16] Shortly after this in 1990, Dubin and Rothwell were the first to estimate the value to the U.S. nuclear industry of the limitation on liability for nuclear power plants under the Price Anderson Act (PAA). Their underlying method was to extrapolate the premiums operators currently pay versus the full liability they would have to pay for full insurance in the absence of the PAA limits. The size of the estimated subsidy per reactor per year was $60 million prior to the 1982 amendments, and up to $22 million following the 1988 amendments.[17] In a separate article in 2003, Anthony Heyes updates the 1988 estimate of $22 million per year to $33 million (2001 dollars),[18] and also acknowledges that as he and Liston-Heyes simply corrected the methodology of Dubin and Rothwell's study and did not introduce new variables; the true subsidy estimates could actually be even higher. Heyes goes on to say: "Do Heyes and Liston-Heyes think that the true number might actually be 10 times bigger? Sure they do. Do they think that their number is closer to the truth than Dubin and Rothwell's number? No, they do not".[19]

In case of an accident, should claims exceed this primary liability, the PAA requires all licensees to additionally provide a maximum of $95.8 million into the accident pool - totaling roughly $10 billion if all reactors were required to pay the maximum. This is still not sufficient in the case of a serious accident, as the cost of damages could very likely exceed the $10 billion.[20][21] According to the PAA, should the costs of accident damages exceed the $10 billion pool, the remainder of the costs would be fully covered by the U.S. Government. In 1982, a Sandia National Laboratories study concluded that depending on the reactor size and 'unfavorable conditions' a serious nuclear accident could lead to property damages as high as $314 billion while fatalities could reach 50,000.[22] A recent study found that if only this one relatively ignored indirect subsidy for nuclear power was diverted to photovoltaic manufacturing, it would result in more installed power and more energy produced by mid-century compared to the nuclear.[23] The results clearly show that not only does the indirect insurance liability subsidy play a significant factor for the viability nuclear industry, but also how the transfer of such an indirect subsidy from the nuclear to photovoltaic industry would result in more energy and more financial returns over the life cycle of the technologies. The energy results alone indicate renewable alternatives are a more viable option, let alone when other shortcomings and risks of nuclear power are added to the list: high construction costs, security and proliferation risks as well as the problems with the long term nuclear waste management.[24]

Although nuclear power is proposed as a partial solution to global warming, there is a general belief that this advantage outweighs its disadvantages, such as:

Note: this section needs to be supported with references from the peer-reviewed literature - please help by editing it.

This is an attempt to engage with some of the issues, addressing some of the criticisms made of nuclear energy:

This section includes ideas based on Thoughts on Nuclear Power by JohnAugust.

"I reckon we do need one small reactor on each continent to provide isotopes for diagnostics, but there are three main problems with conventional nuclear power: there's the risk of meltdown; the problem of radioactive waste … and reactors produce [nuclear] weapons fuel. "I'm in favour of some types of nuclear power which don't have these problems. Unfortunately political leaders aren't interested in [these alternative designs, i.e. thorium] because they want the nuclear weapons." - Karl Kruszelnicki[26] 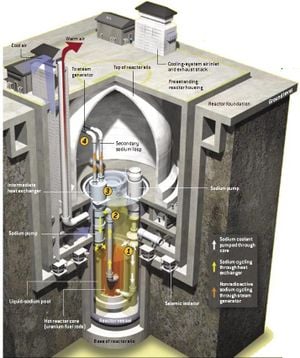 The Integral Fast Reactor (IFR) is a fast nuclear power reactor design developed from 1984 to 1994.[27][28] The design includes both a new reactor and a new nuclear fuel cycle. The reactor is called the Advanced Liquid Metal Reactor (ALMR). The ALMR is a "fast" reactor--that is, the chain reactions between fissile material is maintained by high-energy unmoderated neutrons. The fuel cycle is distinguished by being closed; meaning that the fuel is produced, the power is generated, the fuel is reprocessed utilizing pyroprocessingW, and the waste is managed all on site, reducing the risk of accidents during delivery and the risk of proliferation from theft of the nuclear material.

The funding, the scale, and the duration of the research project make it the largest energy research project in US history.[verification needed] Over the course of ten years of research over a billion dollars was allocated to the Argonne National Laboratory in order to develop a nuclear reactor which reduced the risk of proliferation, decreased the amount of nuclear waste, and increased the efficiency of the fuel cycle. The project was given ample funding and was progressing well, but then was canceled abruptly during the Clinton administration with the only reason given that "We will terminate unnecessary programs in advanced reactor development."[29]

The project was not only canceled, it was also ordered to silence by the Department of Energy and all the progress that was made by the scientists over the decade of research was ordered to not reach the public ear.[30][31]

There are many costs to consider when choosing where and how to generate electricity. Such as the start up cost, availability of the fuel source, implementation cost and time, and operating costs. The graph below shows the range of capital costs for every different type of renewable energy except for biomass.

Capital Costs are the start up cost or the implementation cost to build renewable technology.[32]

This graph below shows the operating costs of the different types of energy except for biomass.[33]

This table shoes the different types of fuels in terms of specific energy.[34]

Looking at the availability of a resource is just as important to determine if a renewable technology will be efficient or not. Biomass and water (varying in season) are practically everywhere on this planet and the current uranium on the planet can supply the world for 230 years. Hopefully in 230 years,[35] we may switch to another fuel source, like thorium or start making nuclear fusion more feasible and cost effective.

On average the sun shines about 12 hours a day, meaning we can only generate electricity for half a day. [verification needed]

Some of the health hazards of Biomass include the following:

Some impacts that can arise from Hydroelectric projects include the following;

Some Environmental Impacts/Hazards that originates from Geothermal Energy:

Some safety concerns about solar power include the following:

Since the majority of solar panels are on top of houses, there is a risk of falling off of the house or carpentry work when screwing down the panel to the roof.

Page data
Retrieved from "https://www.appropedia.org/w/index.php?title=Nuclear_energy&oldid=622029"
Cookies help us deliver our services. By using our services, you agree to our use of cookies.
Categories:
Maintenance categories:
Comments
Privacy policy · About Appropedia · Disclaimers · Mobile view · Content is available under CC-BY-SA-4.0 unless otherwise noted.
</html