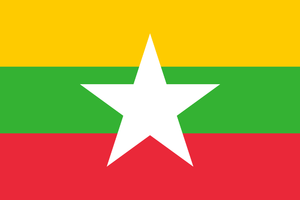 The Republic of The Union of Myanmar, also known as Burma, is a country located in Southeast Asia. According to nationsonline.org, Myanmar is boarded in the north by China, in the east by Laos and Thailand, in the south by the Andaman Sea and the Bay of Bengal and on the west by Bangladesh and India. Myanmar is the largest country in Southeast Asia with a population of 51.4 million (2014 census), and Naypyidaw [nèpjìdɔ̀] is the capital city of Myanmar. The largest city is Yangon.

The climate is tropical monsoon; cloudy, rainy, hot, humid summers (southwest monsoon, June to September); less cloudy, scant rainfall, mild temperatures, lower humidity during winter (northeast monsoon, December to April), as reported by CIA The World Factbook. Terrain: In the north, east and west Myanmar is covered by a mountain range forming a giant horseshoe. Inside the mountain range bordering the north, east and west are the flat lands of Ayeyarwaddy, Chindwin and Sittaung River valleys where most of the country's agricultural land and population are concentrated according to nationsonline.org.

Myanmar holds one of the world's largest forested areas and has one of the highest deforestation rates.The UN's Food and Agriculture Organization reports that Myanmar has lost over 1.3 million acres of forest on average per year. The contributing factor to the deforestation of Burma's natural resources is a conversion for agriculture, both subsistence and industrial; legal and illegal logging, including the establishment of teak plantations; and various types of mining according to mongabay.com.

According to Aye Sapay Phyu of Myanmar Times, "the loss of such sizeable forestry could have a devastating impact, leaving the country even more vulnerable to incipient extreme weather events brought about by climate change, including more severe bouts of flooding, drought, and disease. Some meteorologists have even blamed this year's drastic floods on land use changes, and especially on the loss of forestry." Factsanddetails.com reports that "'Burma is resource rich but surrounded by resource-hungry nations, and this regime has used this fully to its advantage.' Large swaths of virgin rain forest has been cleared by Chinese logging companies, the military regime and insurgent groups to make money. Ethnic insurgents use money earned from selling timber to fight the regime, who in turn uses money earned from selling timber to fight the ethnic insurgents."

As Myanmar is becoming more industrialized air pollution has become one of the more troubling environmental issues Myanmar faces. Myanmar Times reports; "Air pollution levels in downtown Yangon exceed international standards, city authorities have revealed. Monitoring equipment has recorded 102 parts per million (ppm) of airborne particles, 2ppm above the World Health Organisation's guideline of 100ppm." According to journalist Shwe Yee Saw Myint, "The main source of air pollution in Yangon are industry and vehicles. But concrete roads also increase the levels of dust and coarse particles in the air, said Dr. Than Htun, a retired deputy director of the Occupational Health Department" (.mmtimes.com). Yangon is only one example of the cities of Myanmar facing air pollution. Myanmar is a resource- rich country and with companies all of the world trying to claim theses resources (timber, natural gas, tin, antimony, zinc, copper, tungsten, lead, and coal, etc.), organizations aren't taking the time to administer proper safety procedures and by doing so pollute the air, soil, and water which can cause major health risks.

Page data
Retrieved from "https://www.appropedia.org/w/index.php?title=Myanmar(Burma)&oldid=651467"
Cookies help us deliver our services. By using our services, you agree to our use of cookies.
Categories:
About Appropedia · Policies · Contact · Content is available under CC-BY-SA-4.0 unless otherwise noted.