This article considers modern and future transportation modes and their developing technology.

Why did people need to be mobile?

The modern car was invented in 1866 by Karl Benz and became widely available in the beginning of the 20th century. It is rather used to transport people instead of goods.

Railroads are the second most used way to transport freight and people in local traffic.

Yearly, 7.8 billion people are using the train in Europe. That is 1484 travellers per minute. The most important trains are: 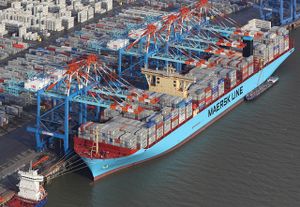 The Mærsk Mc-KinneyMøller in Bremerhaven. This Triple-E-Class containership is the biggest of its kind. Foto: Walter Rademacher / Wikipedia, Original; Lizenz: CC by-sa 3.0

Ships are the most important component for global freight traffic. They are able to transport large amounts of goods at low cost. Transportation is slower than rail-, road- or airtransport. International shipping accounts for 4.5% of global C02 emissions 1.12bn tonnes annually.

While getting absolutely vital for global trading, they became more and more unimportant for passenger transport over the last century. Today, passenger transport via cruiseship is the appreciable way for long distances, according to the motto "The journey is the destination", as it is the slowest modern transportation method.

Electric cars run on electric energy only. They are propelled by one ore more electric motors which are powered by rechargeable battery packs. They provide several benefits over cars with an oil powered internal combustion engine:

There are some challenges with electric cars, that are mostly battery related:

Transportation by plane is fast, but unecological and extremely expensive. For freight transport it is mainly used for light and valuable goods, which have to be delivered very quickly.

Traveling or transporting through space is one of the newer and less explored types of mobility/traveling. Due to the high costs on research, production of the spacecrafts or other things which are shoot into the orbit. However, private companies with bigger budgets than governmental organizations start to make business by traveling into the orbit.

Transportation is now a dominant source of emission of pollutants, some of whose impacts are :

More information about the environmental impacts of transportation can be found here.

In order to accomodate for a rising number of cars on the road cities' traffic infrastructure had to change. Roads had to widen, impediments to traffic flow, like pedestrians, cyclists and street crossings had to be removed and structures like parking spaces had to be build in order to make automobile use more advantageous. These changes came at the expense of other modes of transport. In extreme cases they created a dependency on cars to access certain destinations of daily life, but at the very least they made automobile use more appealing than other modes of transport, which in turn creates the need for more of these pro-car changes to take place in cities in order to keep up with day to day traffic. This causes a spiraling effect, where more cars cause more extreme changes to citie's traffic infrastructure, and these changes in turn cause more cars to be on the road. This is seen mainly as an issue of environmental sustainability, since cars are a major contributor to the production of greenhouse gases responsible for global warming. 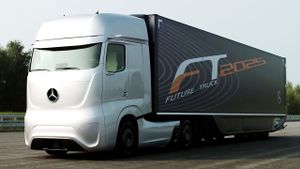 Some people simply cannot wait until the day when autonomous cars become the norm. A few innovators, including Google, have already dipped their toes into the self-driving car market. But the convenience and safety of autonomous cars may be contradicted by the security risks such vehicles pose.

Law enforcement agencies have said that autonomous cars may encourage criminal behavior. Criminals may evade police by changing the programming in self-driving cars to bypass the rules of the road. Having their hands free in an autonomous vehicle may enable criminals to fire weapons or handle other dangerous equipment while the vehicle is in motion, and cars filled with explosives also may be programmed to hit targets.

Autonomous vehicles also may be vulnerable to hackers. Hackers may be able to take over an autonomous vehicle in much the same way they would take control of a computer, tablet or smartphone.

Right now it seems unlikely that the current crop of autonomous cars will be state-of-the-art crime vehicles, seeing as Google's version cannot drive faster than 25 miles per hour. But these concerns are things manufacturers will have to consider before they can offer autonomous vehicles for sale to the general public.

The Future Truck concept was presented by Mercedes-Benz at the "IAA Nutzfahrzeuge 2014". It is planned to be ready for mass production in 2025.

Hyperloop is a concept for highspeed underground passenger transportation. Capsules, powered by eletricity, are supposed to drive through a partially vacuumed tube with speeds of 1200 km/h.

The EV revolution a brilliant blog by Peter Sinclair on Climate Crocks.