What is a Resource?[edit | edit source]

A resource is a source or supply from which benefit is produced.There are several Types of resources like Economic Resources,Biological Resources,Computer Resources.

This Article is about Technical and Computer Resources.

The importance of resouces have changed dramatically over the course of time. Here is a listing to indicate which resource for what time on meaningless won.

The Bronze Age is a technological stage between the Stone and Iron Ages. It began in the Middle East about 4500 bc and lasting in Britain from about 2000 to 500 bc.

Iron is the main component of the steel, and is usually used with 95% by weight of metals worldwide. The reason lies in its wide availability It is used for bridge construction Journey to witness ships and construction. Iron is used for its excellent ferromagnetic properties in generators transformers chokes relays and electric motors. Likewise, iron is essential since it hematopoiesis in animals and in plants photosynthesis and the formation of chlorophyll and carbohydrates support

The Stone Age is the earliest period of human history and characterized by the dominant tradition of stone tools.Stone Knifes, Stone Wheels and Stone Hammers were a fantastic foundation for the Humanity. The "Stone" dominated.

Importance of Recources During the Dark Age[edit | edit source]

The Change With the Industrial Revolution[edit | edit source]

Basic needs are needs that every single human has and can't be changed. Examples for basic needs are food (including water), shelter and clothing. You can also argue that sanitation, education, and healthcare are also basic needs in our modern age. These basic needs are the keys of every other needs humans can have.

Water (H2O) is a transparent fluid and Earth's surface is about 71 percent covered with it. We human need water as a life source and around 60 percent of our weight is water.

The water in a human[edit | edit source]

Around 60 percent of the human adult body weight is water and without it a human would just wither away. The weight percentage depends on age, gender and fat tissue.

Every day humans must consume a certain amount of water to survive. In general, an adult male needs about 3 liters per day and a an adult female needs 2.2 liters. Some of these numbers is consumed within food.

- Vital function that water serves us to keep a human body working:

- Acts as a shock absorber for brain and spinal cord

- Helps deliver oxygen all over the body

- Water is the major component of most body parts.

Water covers close to 71 % of the Earth surface and 96,5 % of that is saline water in oceans, 1,7% in glaciers and the ice caps of Antarctica and Greenland, 1,7% in groundwater and a small fraction in other large water bodies and 0.001% in the air as vapor and clouds. Freshwater is only 2,5% of the Earth's water and 98,8% of that is in ice and groundwater. The rest is in lakes, rivers and the atmosphere.

If you talk about basic needs, you can't help but talk about water. It's not only needed as drinking water, freshwater is needed to grow plants and used in nearly every production cycle. Population and production has grown larger and larger in the last years, resulting in extending use of freshwater, using up reservoirs, such as lakes and groundwater, that has been filled since millions and billions of years. Freshwater supplies are in no way evenly distributed around the planet, there have always been places that had short comes in freshwater, but by increasing populations, the amount of areas with water scarcity is increasing. Also companies, like Nestlé are buying springs of drinking water, often cutting locals up from there only supply of clean water.

Sunlight >> used for solar power.
Wind >> engines can use the power of the wind energy
Earths internal heat >> used for geothermal energy
Biofuel and ethanol >> alternative energy for transportation vehicles or heating engines
Hydrogen >> quickly flammeable element which is used by spaceships and some cars

First the human had wood as a resource. In 1500 people started to use coal as a resource to cook and heat.
In the early 19th century people started to use whale oil as a fuel for lamps. Pennsylvania 1859 the commercialization of petrolium begin.
In 1917, ethanol (alcohol) became a part in the world. People thought about alcohol as an alternative to fossil fuels.
The president of the united states advocated coal gasification as an alternative to oil in the 1970s.

Etymologically the term recycling is made up of the greek word kýklos (Kreis) and the latin prefix re- (back, again). Recycling means extracting and reusing the raw materials a product is made of and in turn reduce the need for new resources.

The following sections show up some of the most important resources some of which are used in electronic devices, their natural origins, if that applies, and the most common techniques to recycle them.

E-waste is a modern word used for electronics such as Computers and Televisions, which are no longer in use, because they are either defect or simply replaced by newer electronics.
Certain laws have been implemented for example in the EU that build a legal frame in which this e-waste can be handeled and be disposed of. The first directive, called WEEE, was implemented in February 2003 and got revised in august 2012, meant to tackle the increasing flood of e-waste.
An addendum to include the handling of hazardous material, called the RoHS directive (Restriction of Hazardous Substances), was implemented in february 2003 and revised in january 2013.
EU-members than addapted these directives into laws for their respective countries. Germany for ecample enacted the "Elektro- und Elektronikgeräte-Gesetz" law or in short the "ElektroG" law on the basis of the WEEE in 2005 and the "Elektrostoff-Verordnung" regulation on the basis of the RoHS directive in May 2013.
Even though the legal framwork is present, only about 5% of e-waste worldwide reaches its destined recycleplants, for the EU about 25%.
The unaccounted e-waste reaches recourse demaning countries like china, or third world countries where no or minimal legal framework for the processing of electronic waste is present, manual labour is cheap and so the e-waste can be turned in easy money or resources, due to its rare components on the cost of the health of the people processing it and the enviroment. The best example is Agbogbloshie in Ghana, the worlds biggest e-waste dump.

Any material which decomposes, that is to say any organic material can be considered Bio-waste and can be reprocessed to fulfill other uses.

A common household practice for example is to create a compost heap, in which to through all organic material, like dishes that turned bad, and let the bacteria decompose that material into earth. The resulting earth is rich in nutrients and can be used as humus.

Copper is a red noble metal with the index number 29 in the periodic table of elements. It has a density of 8.92 g/ccm and is a heavy metal. Because of the high conductivity of copper (at 27 °C : >= 58.0 * 10^6 S/m) it is one of the most important resources used in nearby every modern electronic device.

The production of copper is very energy intensive procedure. To reach such a high conductivity it must be as pure as possible. The most common way to produce pure copper is a galvanic process, where the copper is seperated from other impureties.

"China, which has experienced widespread legacy pollution—recently debuted recycling-for-payment programs in busy subway stations in Beijing. The initiative saw the installation of recycling machines which accept plastic bottles as payment. Passengers receive credit ranging from 5 to 15 cents per bottle, which are then applied toward rechargeable subway cards. The first of the machines officially opened for use in Shaoyaoju station, Beijing in December 2012.

According to a report from The Guardian, more than 100 machines will be put in place in the coming years. Incom, a state-owned resources recovery company, is responsible for the implementation of the machines. Incom currently undertakes processing tens of thousands of plastic bottles every year and hopes the new machines will help reduce the amount of refuse discarded on streets and in public areas."1 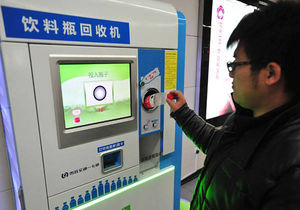 Proprietary software abandoned by its developer can not be maintained by other persons due to locked down source code.

The "not substitutable component" of iPhone[edit | edit source]

Ressources in the computer science. In complexity theory is considered resources, such as computing time or memory space on a processor in the main memory, in a more abstract way as a resource. There are network resources that occur in the form of files and network services that are made available via a computer network. Also, certain files stored in program components are called resources.

The resource software are the files that do not define the end of the program, but save the background knowledge for the course

The adress space is a limited resource because of new devices joining daily. IPv4 consists of 32 bits whereas the IPv6 contains 128 bits. IPv4 is running out of space as it can only handle a range from 0 to 255 per block, so IPv6 gets more and more important in future situations. IP addresses are like streetnames with housenumbers and are mainly used to transport information from one client to another.