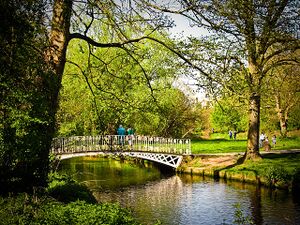 The London Borough of Merton ( (listen)) is a borough in Southwest London, England.

The borough was formed under the London Government Act 1963 in 1965 by the merger of the Municipal Borough of Mitcham, the Municipal Borough of Wimbledon and the Merton and Morden Urban District, all formerly within Surrey. The main commercial centres in Merton are Mitcham, Morden and Wimbledon, of which Wimbledon is the largest. Other smaller centres include Raynes Park, Colliers Wood, South Wimbledon, Wimbledon Park and Eastfields. The borough is the host of the Wimbledon tournament, one of tennis's Grand Slam competitions.

The borough derives its name from the historic parish of Merton which was centred on the area now known as South Wimbledon. Merton was chosen as an acceptable compromise, following a dispute between Wimbledon and Mitcham over the new borough's name. The local authority is Merton London Borough Council, which is based in Morden.

Merton's parks and open spaces range in size from Mitcham Common and a major part of Wimbledon Common to the smaller gardens, sports grounds and recreation grounds within its boundaries. W

The Wandle Trail is a 12.5-mile (20 km) walking and cycling trail that follows the River Wandle from Croydon to Wandsworth in south-west London