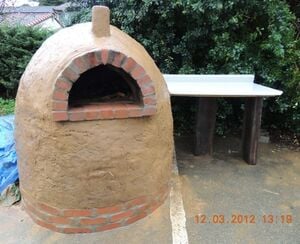 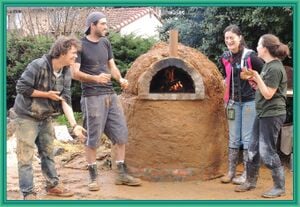 The purpose of this project is to create a low embedded energy, natural, beautiful way to cook pizza. The project will be a collaborative effort including Laurel Tree Charter School, its students, Cal Poly Humboldt, our team, and the local community to demonstrating the ability to apply sustainable practices by designing products for use in daily life.

The Cobb Goblins were commissioned in the Fall of 2012 as a part of Engineering 215, to design and construct an earthen pizza oven for Laurel Tree Charter School. Laurel Tree's mission is to create a sustainable model of education which provides all students with accessible curriculum, based on college preparatory standards, while developing life and socials skills in a mixed age setting.

The objective of our design is to create a sustainable, beautiful, safe, long-lasting, and functional outdoor oven for baking and cooking. The oven will be used weekly for children's pizza lunches and for the occasional school event or fundraiser. Table 1 shows the criteria created by our team in collaboration with Laurel Tree. These criteria were weighted to help choose a design that best fit the client's needs.

This layer retains heat from firing and radiates it back into the oven chamber. The mixture recipe for this layer is 1 part clay, 1 part sand.

This wooly looking layer insulates the inner layer and keeps heat from dissipating into the environment. The mixture recipe for this layer is 1 part clay, 1 part sand, and 5 parts straw.

The straw in the outer cobb layer provides the tensile strength need to make the oven sturdy. This layer is also useful for applying designs to the oven's exterior. The mixture of this layer is 3 parts clay, 3 parts sand, and 1 part straw.

Lime plaster is applied after the inner layers have fully dried. This layer protects the oven from the environment.

A laminate counter top was mounted to the side of the oven and held up by reclaimed wooden beams.

The counter top provides space below for wood storage.

A half inch thick cardboard tube was covered with thermal and cobb layers and used as an anterior chimney to the oven.

A wooden door drilled with holes and a sliding plank allow varying levels of oxygen into the oven for different fire strengths. 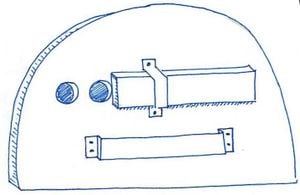 As many materials as possible were obtained used. Table 2 details the total materials and costs for constructing Ovenly Inferno.

Ovenly Inferno is successful in producing enough pizza for the whole school during lunch time. It requires 1 ft^3 of wood to fire it in 2 hours. The oven's peak temperature is ___*F and after cooking __ pizza's the temperature is ____*F. The counter space provides adequate preparation space and the fuel is kept close in the wood storage.

The exact operating temperatures are not known but it was estimated to be approximately 700 Degrees Fahrenheit. This figure was made an associate of Laurel Tree that manages a similar outdoor oven. Heat is not radiated on the sides or back of the oven; the insulation has proven effective.

Laurel Tree's first uses were found to be too hot; damage from this is possible but not confirmed. They now operate it at lower temperatures with success. 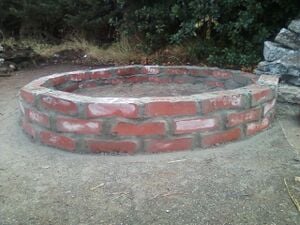 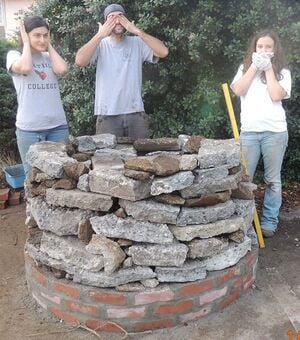 Stacked Urbanite
Stack urbanite within the footer to reach the desired height (about 36"). At the top of the stack, create a perimeter from urbanite that will be filled in.
3 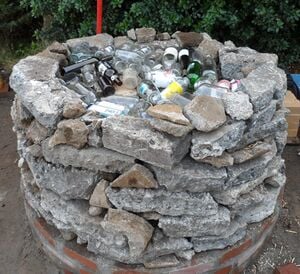 Glass Bottle Insulation
Fill in perimeter with glass bottles laid on their side.
4 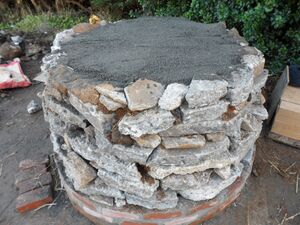 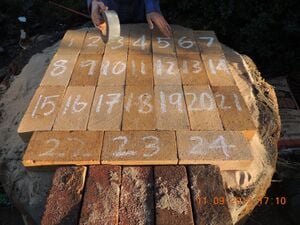 Firebricks
Arrange firebricks and tamp down onto the leveled sand. A roll of duct tape was used; however a mallet would be preferable. The bricks were labeled with numbers since they were previously arrange on a table to find the best fit. Arrange and Mortar red bricks for the mouth of the oven.
6 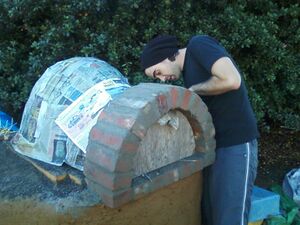 Sand Mound and Red Brick Mouth
Use a wooden form to help support red bricks as you mortar them into an arch. To avoid cracking, create a wedge cut keystone as the top brick in the arch. Mound wet sand on top of the firebricks to create a dome that will act as the form which the oven layers will be built on top. Cover the sand with wet newspaper so that it holds its shape and doesn't attach to the inner thermal layer.
7 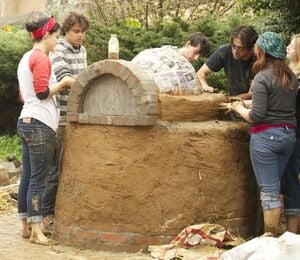 Application of the Inner Thermal Layer
Apply the thermal layer clay mixture around the sand mound. It should be 5" thick. Pound the clay downward instead of into the mound to keep the integrity of the mound intact. Work your way up the mound in about 6" layers.
8 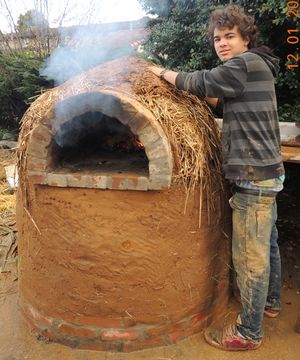 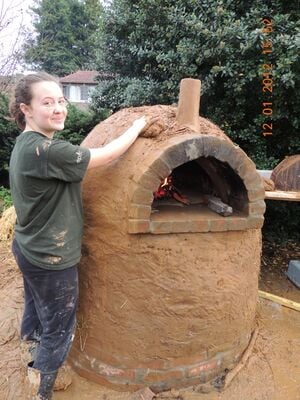 Application of Outer Cobb Layer
Before applying the outer cobb layer, cut a hole in the previous two layers for the chimney. A thick cylindrical hollow cardboard tube was used. The tube was covered with the thermal layer mixture.
10
File:Asdklfasl.jpg
Designs molded with cobb
Use cobb to put designs onto the exterior of your oven.
11
File:Asldkfasldkf.jpg
Application of Lime Plaster
Apply a layer of lime plaster to protect the oven from the elements.

The oven will need to undergo a lime wash every five years. This wash will heal the lime plaster of any cracks that may develop. The oven should be fired

Since the oven was constructed two years ago it has experienced damage and degradation. The oven has not received the final plaster coating that was planned. As a result it has been subject to increased weathering and cracks. Furthermore, it was reported that vandalism had occurred and the chimney destroyed. The debris was cleared and the oven remained operable.

According to Laurel Tree the oven is still in use, though they claim the frequency of use would increase if repairs were made, citing more confidence in the oven as the primary reason.

The oven has a work station attached to it, and a series of cabinets adjacent to that. Both are exposed to the elements to some degree which was not preferable for aesthetic and durability reasons.

Since the last update, the staff and students have been unable to make any progress until this recent summer of 2016. One of the staff members, who goes by Sam, took the oven project under his guidance in an effort to bring the oven back to its glory days in 2012-13 when the students were able to enjoy pizzas on a regular basis.

Unfortunately they have not been able to fully fix the degradation and vandalism that occurred in 2014. However they have attempted to mend the oven back together by resurfacing and adding three layers of cobb. Initially Sam and the students decided on using cobb with crushed up mosaic tiles with the intention of giving the oven some flair. This layer unfortunately had trouble staying on so they scraped the flakes off and proceeded with two successful layers of cobb. The bottom layer of cobb contains hay and straw while the upper layer contains cattail which has helped smooth out many rough portions on the oven exterior.

The whole oven still requires two more layers of cobb, one containing cattail, and the other the same finishing layer that has yet to be applied since the project took off in 2012. After filling out most cracks on the outer layer Sam and some students have tested the oven by having a weekly fire. According to their findings, the oven is definitely producing the same high temperatures it once was.

Other than the two additional layers of cobb, Sam and the students intend on adding a nice maple door to cover oven opening, and possibly rebuild the chimney, even though they believe it will suffice without a higher chimney.

Page data
Retrieved from "https://www.appropedia.org/w/index.php?title=Laurel_Tree_Charter_School_ovenly_inferno&oldid=631263"
Cookies help us deliver our services. By using our services, you agree to our use of cookies.
Categories:
Maintenance categories:
Comments
Privacy policy · About Appropedia · Disclaimers · Mobile view · Content is available under CC-BY-SA-4.0 unless otherwise noted.
</html