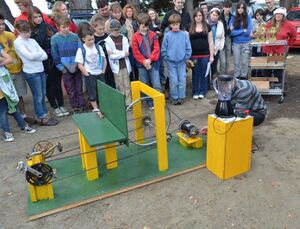 Team Pink Elephants designed a human powered blender during the Fall 2012 for the Cal Poly Humboldt Engr215 Introduction to Design class. The human powered blender is a device intended to be used by students in grades K-12 at Laurel Tree Charter School in Arcata, California. The device will blend food in the school's cafeteria, while teaching students about alternate methods of energy production.

Laurel Tree Charter School, located in Arcata, California, recruited Cal Poly Humboldt’s Engineering 215 students to design an electric, commercial food blender that is powered by human energy to use in the school’s cafeteria.

The criteria for the project, Frankenstein's Axle were identified and developed to ensure that any generated solutions would fit the minimum qualities desired. The team deliberated on its generated list of criteria with the client in order to clarify and focus on the needs that must be satisfied by the project. The criteria below are constrained to fit the definition of our problem as discussed with the client.

The human powered blender takes advantage of the convenience of basic electric kitchen blenders meaning that using the blender itself is as simple as plugging it in. Electricity for the blender is drawn from the battery, and the battery charging system is the definitive process that makes the blender human powered. The design uses a 350W 36V permanent magnet DC motor with a two inch v-belt pulley mounted onto the shaft of the motor. A 45 amp, 600W blocking diode prevents the battery from powering the motor and draining the battery unnecessarily. The motor is wired to the battery and the battery to an inverter which provides AC power to a variety of appliances rated at 400W with a peak output of 600W. 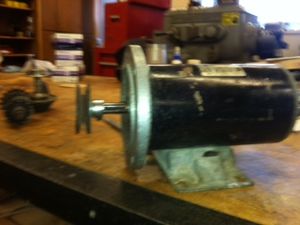 Fixed to the face of the permanent magnet DC motor is a weld on V belt pulley.

Wired to Blend- Included in the system are the electrical components required to charge the battery and power the blender. The parts included are the 12V battery, the 400W blender, a 30 amp fuse, a 40 amp blocking diode, and 10 gauge copper wire leads. When setting up the system for use,the leads should connect the components as follows: The fuse is connected directly to the negative battery terminal. The fuse is then connected to the negative terminal on the motor. On the positive battery terminal, the blocking diode runs between the battery and the motor so that the battery does not discharge to the motor. The inverter is then connected to the battery when wanting to power the blender.

The cost of the design and production of this model is measured in dollars spent as well as hours worked by each team member. Below is a table of every material purchased and otherwise acquired to build PINK ELEPHANTS.

The project budget was set at $410.00 and every component purchased is logged. There are estimated retail dollar values assigned to each material or component that was donated in order to represent a more realistic production cost. 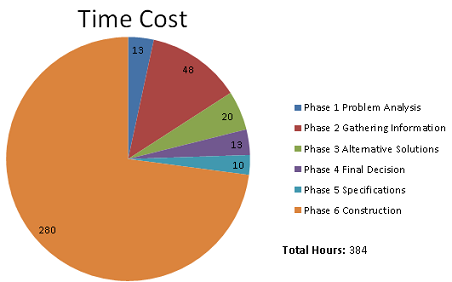 Below is a pie chart representing the archived number of hours spent working through each stage of the design processes. The team spent on the entire design process is broken down into percentages, recognizing the proportion of time spent on each phase. 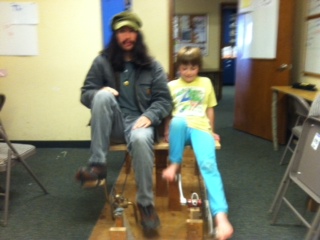 Human Powered Blender in use!

The results of building the design model concluded that the side-by-side tandem recumbent bicycle powered blender was an effective design. With moderate cadence of pedaling, 14 volts is easily achieved, and with two people adding the power, it is a light exercise for both. The multimeter used capped out at 10 amps, thus it produces at least 10 amps, which yields 140 watts. The blender is 420 watts, thus for one minute of blending; only three minutes of pedaling are required. Since the battery used was nearly full, only six watts were effectively charging it, and as it drains, the maximum charge is more likely to be obtained.

Each component that makes up this project was designed and built individually. The individual parts are the cranks, the bench, and the rear axle, which are all mounted to one piece of plywood to form one whole piece.

1. The Cranks Two scrap bicycles were donated to be used for parts for PINK ELEPHANTS. To build the cranks in this project, the pedals from the bicycles were hacksawed off and mounted to 2 by fours with metal brackets. Each standing crank was then mounted to the plywood and reinforced with additional 2 by fours and two-inch screws.

3. The Rear Axle The rear axle for this system is designed so that each set of pedal cranks will engage the bicycle wheel. aq 21 inch steel bar was salvaged from the axle of an old go kart and fixed with a bicycle wheel on one end and a flywheel scrapped from another bicycle wheel is fixed to the opposite end. This allows bicycle chains to be attached to either end of the axle.

4. The Mounting Board The mounting board is a sheet of plywood that is 3/4" thick by 32" wide by 6.5' in length. The plywood was cut to this size in order to define our spatial constraints as far as storage space and transportability. 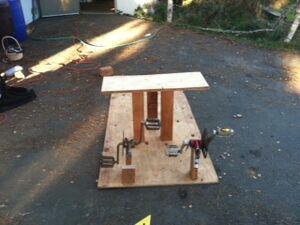 Mounted bench and dual crank system
After cutting the plywood mounting board to desired size (6.5' 3'), fix the bench to the face of the plywood. Once the bench is in place, you are then able to measure a comfortable distance to mount each set of pedal cranks.
2 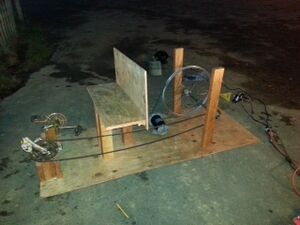 Once the pedal cranks have been mounted in a relative distance to the bench, the next step is to mount the rear axle which is done by screwing in the 17 inch tall 2x4 wooden posts that have mounted pillow blocks with 3/8 inch bearings to allow the axle to spin. Next, you can fix a chain from the cranks to the axle and tighten it accordingly.
3
The next step is to cut 3 two by four pieces of wood to the length of the entire mounting board. After everything was mounted to the project board and the chains were tightened on both crank sets, the mounting board bent to an arc that does not rest flat on the ground. For this reason, we mounted the project to 3 two by fours that are less likely to bend and provide lasting support. Finally, you can paint the project.

We as a team would like to thank the people that made this project possible. Thank you Rebecca Schuler of Laurel Tree, for providing a workspace, tools, and guidance. Thank you Marty Reed, for helping us build the metal parts of our machine. And finally, thank you bicycle Revolution Bicycle Repair in Arcata, Ca for donation of parts and time.